A classic tale of scandalous revenge and delicious submission.

When Lady Caroline Pearson learns that her brother-in-law has idiotically, and illegally, gambled away her house, she decides that enough is enough. Boldly, she confronts the new owner in person. But not only does the dashing rogue, James Ferrington, refuse to return Caroline’s deed, he tries to take scandalous advantage of her as well.

Sheepish and repentant, James arrives on Caroline’s doorstep to make amends–unaware that she is now intent on retaliation. James merely meant to seduce a bewitching minx and have done with it–and, suddenly, he’s a kidnapped prisoner in Caroline’s cellar. But most shocking of all, James realizes that he has no desire whatsoever to be free–for the audacious Caroline has inflamed his senses, destroyed his reason…and completely captured his heart.

You and No Other is an older book by Cathy Maxwell that I somehow missed reading when I was making my way through her books!  I certainly missed a gem!  Why did I read it now, rather than putting it off, as it was an older book…..look at 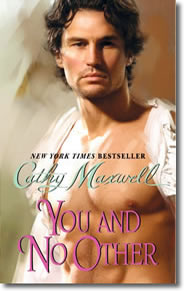 the cover!  The reason should be clear!

You and No Other is a story about Lady Caroline Person, a widow, who’s idiotic brother-in-law gambles away the deed to her house – something that he has no right to do.  The person he loses the deed to is James Ferrington – a rich bachelor of somewhat common origins who is almost engaged to another woman.  Lady Caroline decides to take matters into her own hands after her brother-in-law – Freddie – refuses to retrieve her deed.  She is astonished that James refuses to hand over her deed and the story is on!

Lady Caroline lives with her dead husband’s aunt Minerva, who has a scandalous past.  She ran off with her friend’s fiancee just before the wedding.  She has made her way through life as the mistress of several people.  Her friends are  just as colorful and their shenanigans are hysterical!  I can just imagine a bunch of old ladies trying to manipulate situations as they do in this book!  Things get out of hand when this group of ladies kidnap James and hold him for ransom in Caroline’s basement!  I’ll leave the rest of the story for you to read!

On the surface, this story pushes believability for Regency England.  The unchaperoned trips about town, the fact that Caroline teaches in a girl’s school while having Aunt Minerva living with her, kidnapping James and hiding him in a basement.  The interesting thing, is that this book just romps along from one humorous situation to another; from one confrontation between James and Caroline to another.  You forget that this story is written in Regency England, and just hang on for the ride!  I read this book in just over a day, and had trouble putting it down.  Pick up a copy of this book and just enjoy the read!!

RT BookReviews give You and No Other 4.5 stars and has the following to say: “Several audacious characters, a few abductions and a radiant romance make this a memorable read. Cathy Maxwell always seems to find a way to engage the reader’s emotions.”

(28953)
$259.99 (as of February 1, 2023 10:13 GMT -08:00 - More infoProduct prices and availability are accurate as of the date/time indicated and are subject to change. Any price and availability information displayed on [relevant Amazon Site(s), as applicable] at the time of purchase will apply to the purchase of this product.)