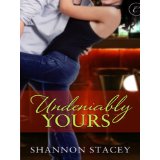 One-night stand + two percent condom failure rate = happily ever after?
Bar owner Kevin Kowalski is used to women throwing their phone numbers at him, but lately he’s more interested in finding a woman to settle down with. A woman like Beth Hansen. If only their first meeting hadn’t gone so badly…
Beth’s tending bar at a wedding when she comes face to face with a tuxedo-clad man she never thought she’d see again. She tries to keep her distance from Kevin but, by last call, she can’t say no to his too-blue eyes or the invitation back to his room. Then she slips out before breakfast without leaving a note and, despite their precautions, pregnant.
Kevin quickly warms to the idea of being a dad and to seeing where things go with Beth. After all, he’s not the player she thinks he is. But she’s not ready for a relationship and, given his reputation, it’s going to take a lot to convince her to go on a second date with the father of her child…

Beth Hansen is having a bad day!  She has a nasty drunk for a boss, who has too many hands.  Kevin Kowalski, the owner of the bar they are in, decides to cut off this boss (mistaking him for Beth’s date) and the boss gets physical.  A few minutes later, the boss has a broken nose and Beth has been fired.   She leaves after her boss has been taken away by the cops and Kevin is handed a napkin with a woman’s phone number on it.  She needs to find a new job and she doesn’t need to be interested in a player.  Several weeks later, Beth is working her new job bar tending a wedding when she runs into Kevin again.  This time, she gives into the pressure of his charm, and spends the night with him.  As you can read from the blurb, she ends up pregnant.

The rest of the book tells the story of Beth and Kevin’s friendship and developing romance.  Obviously, since this is a romance, it has a happy ending 🙂  I liked this book!  The characters of Kevin and Beth were well written characters.  They gradually moved into a wonderful romance as the book progressed.  No massive sparks and flying clothes, more of a growing mutual attraction.  It is refreshing to read a romance that is character driven, not sex driven!  The families of Kevin and Beth as well as Paulie, Kevin’s best friend, provide a whole host of secondary characters to round out the story.  Kevin’s nephew that keeps “talking” to the baby was hysterical!

Nothing negative to say about this book.  Just a wonderfully written, realistic romance about a couple who start their relationship with a pregnancy, not the other way around.

(192132)
$34.99 (as of July 1, 2022 10:23 GMT -07:00 - More infoProduct prices and availability are accurate as of the date/time indicated and are subject to change. Any price and availability information displayed on [relevant Amazon Site(s), as applicable] at the time of purchase will apply to the purchase of this product.)