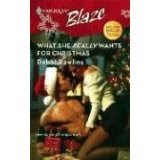 What would you do if you hit the jackpot?  Thanks to a spectacularly bad ex-boyfriend, Liza Skinner is in one heck of a mess.  She’s lost not only her amazing job at Atlanta’s hottest TV talk show, but also her best friends and her share of millions of lottery bucks!  Frankly, a blackmailing ex in the cherry on Liza’s misery sundae!

But then an unexpected date with Dr. Hunky-Hunk, Evan Gann, turns Liza’s life around again, especially when she suspects the good doctor is quite a bit naughtier than she first thought.  So that whipped cream from her sundae might come in handy for those sinfully delicious nights…

Nights that will end for certain if Evan discovers what she’s been hiding!

What She Really Wants for Christmas is a book that has been sitting on my TBR pile for some time now.  It is the final book of a series that I read back in 2007.  While reading the series, I seemed to develop an animosity for Liza, the subject of the last book and because of that, I had been avoiding reading this book.

Liza Skinner had her dream job – creative director for “Just Between Us”- a popular TV talk show created by her and her two best friends, Jane and Eve.  At some point she started dating Rick, someone her friends didn’t like and through a series of events, Rick stole Jane’s diaries and was blackmailing Liza with them.  Liza drops out of sight and shortly after, the group at the TV show won a lottery jackpot and to pay off Rick, Liza sued her friends to get 1/7th of the winnings.

As this book is started, Liza runs into Evan Gann while lurking at the TV station and decides to take him up on his invitation out for a drink  in order to see if she can pump him for information on the lawsuit.  This starts a rocky relationship between Liza and Evan.

Although I’ve read the other books that made up this series and enjoyed them, I went into reading this book with a bit of a bad attitude, yet trying to be open-minded as I wanted to officially finish this series off, and I needed another Christmas themed book for the Christmas challenges.  I found the premise of the book to be somewhat weak.  I couldn’t understand why Liza, at no point, attempted to go to the police to get help with the blackmail situation.  As time progressed, Rick was progressively drunk or stoned and one would think that the opportunity was there for Liza to seek help from someone.  She even tried to keep Evan in the dark.  I didn’t feel that enough logic existed to explain the series of events that had occurred before the book started and this continued through the telling of the story during the book.  Liza’s actions at times made sense, but frequently she did illogical things.  Evan was exceedingly tolerant of Liza’s irrational behavior.  She was inconsiderate of his feelings, and unwilling to rely on his help with the situation she had gotten herself into.

The redeeming quality of the book comes at the end where this multi-book series is brought to a close.  Like all good series, we get a final glimpse into the lives of the characters we have learned about in previous books and we tie all the loose ends.  Although there is positive and negative in every book, and I remind myself that others may enjoy what I don’t, this book is probably my least favorite read of 2010.

(127482)
$54.99 (as of July 1, 2022 10:23 GMT -07:00 - More infoProduct prices and availability are accurate as of the date/time indicated and are subject to change. Any price and availability information displayed on [relevant Amazon Site(s), as applicable] at the time of purchase will apply to the purchase of this product.)