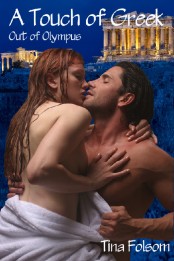 Selfish and gorgeous Greek God Triton is cast out of Olympus after seducing Zeus’ mistress and can only gain reentry if he finds a woman who loves him for his kindness and selflessness, not his beauty. When the mortal Sophia – recovering from an eye operation and virtually blind – needs a home healthcare worker, he takes on the role, hoping she will be his ticket home.

While defending Sophia from an unknown adversary, Triton’s protective instinct emerges. At the same time rival Gods do everything to doom him to failure. And even if Triton can win Sophia’s love, will he throw it away to return home, or will he lose his own heart to the only woman who truly sees him?
A Touch of Greek is the first book in the humorous and sexy paranormal romance series Out of Olympus following the romantic adventures of four Gods: Triton, Dionysus, Eros, and Hermes.

In A Touch of Greek, Triton has been caught one too many times in a bed he doesn’t belong.  To teach the bed hopping Triton a lesson, Zeus sends him to modern day America without any of his powers.  In order to get back into Olympus he needs a woman to fall in love with him for anything other than his looks.  Since his looks have gotten him far with the ladies, Triton is puzzled as to how to fulfill Zeus’ conditions.  Although Zeus has forbidden any of the other gods from helping Triton, his friends Dionysus, Eros and Hermes add their two cents with hilarious results.  Dionysus thinks that Triton should find a blind woman to fall in love with him and to that end, they find themselves at the Charleston School for the Blind.  While Triton questions the merits of choosing a child, the alarm is raised by the children and they are on the run!  Eros and Hermes interfere in equally wonderful ways that have the reader laughing as the pages are turned.

Sophia and her friend Francesca are out for a drink at a nightclub when they meet Triton.  His presence fills the club and overwhelms Sophia, the current target of his affections.  Although Sophia is  bowled over by Triton’s presence, she sees him for the “himbo” he is, and leaves him standing on her doorstep when the stunned Triton was expecting some action.

Sophia is trying to renovate her house to serve as a bed and breakfast but keeps having accidents.  One of these accidents leaves her in hospital and potentially blind.  Who is responsible for wanting to harm her?  Triton steps in to help her while she recovers and also to protect her from future harm.  He feels drawn to Sophia and is confused by these new feelings.  I’ll leave you to read from this point.

A Touch of Greek is a well written story that has the reader laughing at the antics of Triton and the various Gods, cheering for Sophia when she resists Triton, and turning the pages to find out what comes next.  I was impressed how the author brought the topic of Greek mythology (something I found pretty dry in school) to a modern romance and had me straining to remember what I could about the various Gods.  Triton and Sophia are well developed characters and the various other Gods and other assorted secondary characters all worked well together.

A Touch of Greek is a thoroughly delightful book!  I loved seeing traditional Greek gods in modern settings. Really, what could be better than a series of books about a collection of well-buffed young men.   I am so looking forward to the next books in the series. Dionysus in this book came across as quite the character.  His book should be outstanding!

Pick up this book today and settle in for a great read!  I give this book 5 stars!

(257315)
$29.99 (as of January 29, 2023 10:51 GMT -08:00 - More infoProduct prices and availability are accurate as of the date/time indicated and are subject to change. Any price and availability information displayed on [relevant Amazon Site(s), as applicable] at the time of purchase will apply to the purchase of this product.)