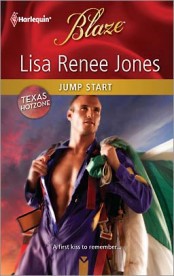 A battlefield moment of clarity leads Sergeant Bobby Evans back to the Texas town he fled long ago. His new mission—winning back the woman he wants, by any naughty means necessary.

Jennifer Jones spent seven years aching with the memory of Bobby’s blistering kisses—and his sudden, silent departure. Now he’s back, looking to pick up where they left off—naked and voracious. But Jen won’t get burned again, no matter how hot Bobby turned out. Two torrid weeks, then she’ll give him his marching orders…or not!

Jump Start is the first book in Harlequin Blaze’s latest series called “Texas Hotzone.” Looks like the Blaze series will be releasing lots of Men in Uniform books.  This is good for the “Men in Uniform” reading challenge that I’m participating in!

Sergeant Bobby Evans comes back to his home town for a wedding and to re-connect with his only love – Jennifer Jones.  Bobby has had enough of living out of a duffel bag and dangerous missions and wants to see if he can win back the woman he walked away from 7 years ago.  In the meantime Jennifer has become a vet and opened her own clinic, but has never really found a man who competes with Bobby.  She’d determined not to fall for him again, but the chemistry is so strong!

I liked this book about Bobby trying to sort out what is important to him in his life.  He was motivated and focused.  He was determined to win Jennifer back by any means.  I found Jennifer to be somewhat inconsistent, but possibly appropriate considering how she was abandoned by Bobby years ago.    The pacing of this story is good.  There’s a bit of tension and an opportunity for Bobby to show off his jumping skills.  This book also sets the stage for the series, which is apparently The Texas Hotzone.  Stay tuned for more men in uniform….

(188237)
$24.99 (as of November 25, 2022 10:02 GMT -08:00 - More infoProduct prices and availability are accurate as of the date/time indicated and are subject to change. Any price and availability information displayed on [relevant Amazon Site(s), as applicable] at the time of purchase will apply to the purchase of this product.)