Source: I purchased this book to read and review. 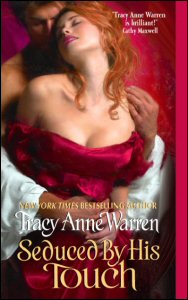 He Had to Marry Her…
Everyone in London agrees the Byrons are just as ‘mad, bad and dangerous to know’ as their famous poetic non-relation. But Lord Jack Byron is facing a predicament that is scandalous…even for him!
Marry a young woman because he lost a bet? Unreformed rake Lord Jack Byron would do anything to get out of it. But the rich merchant who holds his debt insists Jack lead his on-the-shelf daughter to the altar…and make her believe it’s a love match. With no option, Jack agrees, thinking he’ll be shackled to a closed-in spinster.
But Grace Danvers is no milk-and-water miss. When he first encounters her in a London bookstore, Jack is struck by her tempting sensuality and soon becomes determined to bed, and wed, her (in that order!). Yet though he plans to seduce her with his touch, he never dreams he’ll also want to win her with his love.

Seduced by His Touch is the second book in Tracy Anne Warren’s latest trilogy about the Byron family.  I picked up this book after I finished the first in the trilogy – Tempted by His Kiss. This book starts at the wedding of Cade and Meg (Tempted by His Kiss).  Ms Warren uses the following paragraphs to introduce us to the hero of this story, Lord John (Jack) Byron.

Lord John Byron – or “Jack” as he was know to his family and friends – fought the urge to give a good, hard tug to his starched, white cravat.  Ever since he’s walked into St.George’s Church this morning and taken his place at the alter, his breath had grown increasingly shallow, his throat constricting, as though an invisible hand were squeezing in a vise grip.

His reaction might have been understandable except for one small fact – he was only the best man!

We are then skillfully lead into Jack’s story.  Jack earns his living as a gambler.  As a second son, he has an income, but he adds to it though his skill at the tables.  One night he finds himself outplayed by a man who offers to forgive his $100,000 debt if Jack woos and marries his daughter.  Feeling that he has no other option, he follows the instructions in a letter and finds his soon-to-be-wife, Grace Danvers in a bookstore.  At first glance he starts to see things he likes in Grace and sets out on a campaign of seduction.  The old man insists that Grace must fall in love with Jack.

Grace is minding her own business that day in the bookstore and is unprepared to meet Jack.  She doesn’t fit in the description of what society finds beautiful.  She has red hair, she is quite tall and she is outspoken.  She is puzzled by Jack’s pursuit, but eventually falls prey to his charm and sensuality.

This book, although somewhat predictible (you had to know that Jack would be found out!) was delightful in it’s telling.  Jack goes from being a confirmed bachelor that has women falling in his lap to a man in love who has to work to earn his bride to be.  Maybe it’s just the movement from immaturity to maturity, but the changes that Jack undergo are delightfully written and a joy to read.  Grace Danvers is pearl that needs discovering.  She has lived in her own shadow for so long that she can’t see her own worth.  Although she falls prey to Jack, she has enough back-bone to make him work for her hand.

Although I would probably rate this book higher than the first one, it is probably because I liked the characters a bit better in this one.  Both books are well written with strong, well formed characters.  The secondary characters provide a wonderful back drop and depth to the primary story.  Overall a well-thought out, and well-told romance.

RTBookReviews labels Seduced by his Touch a Top Pick with 4.5 stars!  They have the following to say: “Warren’s series continues with a marriage-of-convenience love story that deeply touches heart and soul. She shows the nuances of a relationship and that as difficult as it is to seduce a woman into your bed, it is much harder and more worthwhile to win her trust and everlasting love.”

For more information on upcoming books by Tracy Anne Warren, visit her website by clicking HERE.

This book goes towards my Historical Romance Reading Challenge.

(102390)
$149.99 (as of January 29, 2023 10:51 GMT -08:00 - More infoProduct prices and availability are accurate as of the date/time indicated and are subject to change. Any price and availability information displayed on [relevant Amazon Site(s), as applicable] at the time of purchase will apply to the purchase of this product.)