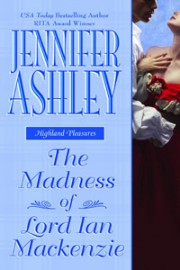 It was whispered all through London Society that he was a murderer, that he’d spent his youth in an asylum and was not to be trusted – especially with a lady.  Any woman caught in his presence was immediately ruined.  Yet Beth found herself inexorably drawn to the Scottish lord whose hint of a brogue wrapped around her like silk and whose touch could draw her into a world of ecstasy.  Despite his decadence and intimidating intelligence, she could see he needed help.  Her help.  Because suddenly the only thing that made sense to her was The Madness of Lord Ian Mackenzie.

The Madness of Lord Ian Mackenzie is the first book in the Highland Pleasures series by Jennifer Ashley.  Our story starts with a glimpse into the life of Lord Ian Mackenzie.  He is the man who polite society has decided is a murderer based on gossip and hearsay.  We find him buying a Ming bowl from Sir Lyndon Mather, the man who is due to marry Mrs. Beth Ackerley, a very wealthy widow.  He decides to look into the life of Mrs. Ackerley to decide if she deserves a reprobate husband like Sir Lyndon.  His man of all work, Curry, is set to that job while we get a look at the issues surrounding Lord Ian and start finding out the history of his life.

Curry finds that Beth is completely unaware of what she is getting for a husband, and Lord Ian takes it upon himself to educate her.  This is Beth’s first exposure to Lord Ian;  She has heard rumors, but hasn’t actually met him before.  We are gradually drawn into the lives of Beth and Ian and watch the unlikely romance develop.

I haven’t read a book by Jennifer Ashley in a while, and when I spotted this one at the store, I was immediately attracted to the potential of men in kilts – I tend to be shallow that way!  What I got was a riveting, complex story of an incredibly damaged man and the woman who would essentially save him.  Lord Ian had been beaten as a child and locked up in an asylum for the insane by his father.  He was incredibly intelligent and capable of retaining large volumes of information.  His older brother, the duke, had him read reams of papers so that he could compare and contrast the information and spit out details like a computer.  He had what we would call a photographic memory.  What he didn’t have was much socialization.  He spoke his mind without guarding his thoughts.  His brothers, and his manservant Curry, protect him as much as they can.

Beth was married to Thomas Ackerley, a minster,  for several years before he passed away.  Upon his death she got a job as a companion to a wealthy old lady who passed on her wealth to Beth when she died.  Beth was raised in poverty, supposedly the daughter of a French noble emigree, but educated in the social graces by the woman she worked for.  She sees the potential in Lord Ian and works to help him.

Although the story rumbles along at a slow pace, I feel that this is appropriate so that the reader can take in all the detail that is presented and absorb the story.  The characters are masterfully crafted and developed.  I find it amazing that this author can take such a damaged character and create a wonderful hero out of him.   We are given snippets of information about Lady Isabella and Mac, Hart, Cameron and Daniel throughout this first book.  I look forward to learning more about them in the next books in this series.

RTBook Reviews loved this book!.  They gave it 4.5 stars out of 5 and labeled it a Top Pick.  Their review had the following to say: “Ashley’s enthralling and poignant romance shows that people thought to be completely devoid of emotions only require the proper stimulus of another’s emotional response to unlock their subconsciously buried feelings. By tackling an unusual theme, à la Laura Kinsale, Ashley touches readers on many levels. Brava!”

Romance Rookie gave this book an A- and had this to say: “Wow, what a treat! I might as well jump on the bandwagon along with everybody else who has written a glowing review of this book. I really enjoyed it.”

Janet from Dear Author had the following to say: “It strikes me that these novels will all investigate the line between passion and madness, and that they will all offer a new perspective on the concept of “normal,” which is itself a welcome addition to the genre, as far as I’m concerned.  I was definitely entertained enough by The Madness of Lord Ian to recommend it and to look forward to Mac and Isabella’s story. ”

(77902)
$14.59 (as of January 29, 2023 10:51 GMT -08:00 - More infoProduct prices and availability are accurate as of the date/time indicated and are subject to change. Any price and availability information displayed on [relevant Amazon Site(s), as applicable] at the time of purchase will apply to the purchase of this product.)