Today we are going to be talking to L.A. Burton.  She is taking part in a BLB eBook tour and is joining us as one stop on the tour.  For the rest of the stops, click here.  She has written Storm of Magick.  It was released last October to great reviews! 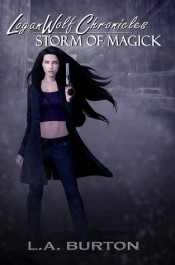 Most of my regular readers realize that I have a fondness for Historical Romances.  The heroines found there may be strong in some cases, but they certainly aren’t the Kick Ass kind of heroine that is found in Storm of Magick.  This isn’t the first kick ass heroine that I’ve read about recently, so it got me to thinking.  How to create such a strong character?  I asked Ms. Burton to write a few paragraphs on the creation of a really strong heroine.  Here’s what she wrote:

When I create Logan Wolf, I first picked an actress that looked like Logan in my head and in ten and a half years, it changed once. It’s easier for me to picture the characters in my head that way. Now I know what Logan looks like and now it’s time to give Logan realistic traits and personality.

At first, I took a hard look at myself. I also had to look at the month in which Logan was born and put in those traits. I wanted to give Logan qualities that I wished I had. I found that as I wrote I took on some of Logan personality; Logan is independent, stubborn, which I have always been. Just like me, things fall out of Logan’s mouth before she can stop it. It’s a bad habit we have.

But, to make Logan more believable I gave her flaws. She has a fear of being possessed by a demon. She holds a grudge like you wouldn’t believe. When she meets one of the other characters, she doesn’t like him right off the bat. Like us all Logan holds several people very dear and would protect them at any cost. As we will see in book 2 ‘Blood on the Moon’.

What makes a heroine strong or for that matter any woman? The love for the people around them. The fear of everyone leaving her. I guess you could say that Logan in a different dimension is me personified. I don’t carry a gun but our personalities are very similar. I created a strong heroine to show readers that a woman can be strong yet loving.

Storm of Magick sounds like an intriguing story.  Here is the blurb from Amazon:

What would you say if you found out a half vampire half fairie hybrid existed? Impossible! Yeah, I thought the same thing.

Logan’s not your average witch. For one thing, she can’t control her magic. For another, she’s just broken a major magical law (which sucks). Now if that secret gets out she will become the hunted. Jack the Ripper’s surgical kit has been stolen and his spirit is in control of a human and now he is recreating the White Chapel murders. Will Logan find Jack before he tries to kill her? Logan’s really having a hell of a week. Some days she should just stay in bed.

Previous Post: « Fool For Books Winners
Next Post: Bestseller 4 a Day – A Walk in the Snark by Rachel Thompson »