Today we are welcoming Cara Marsi to the blog!  She is the author of Cursed Mates as you can see from the cover above.  Today she’s going to share with us her thoughts on Paranormal Activity.  Without further ado, here’s Cara:

A while back a movie called Paranormal Activity was a big hit. It spawned two sequels. Cameras were set up to capture real paranormal activity that occurred while the homeowners slept. I’m not sure I believe everything in the movie was real.

But I do believe in the supernatural, and I’m not the only one. Look at all the vampire, werewolf, demon, witch, ghost, etc, books and movies that are so prevalent now. Those who study popular culture say our fascination with the supernatural is a wish to escape from the trials of our world and a desire to have superpowers to give us control over events. If I were to have a supernatural power, I’d be like Samantha in the old Bewitched TV show. I’ve always wanted to be able to twitch my nose and have a clean house. That’s all the superpower I’d need. 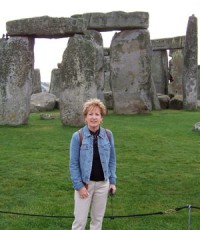 Many of us have had brushes with the supernatural. I wish I could say I’ve had a lot of experience with psychic phenomena, but I haven’t. I’ll tell you about some of my mystical experiences, one in particular involving what might have been a celestial being.

I don’t know if you’d call this next thing mystical, but it is psychic. I’m not one of those lucky people who win lots of contests or win the lottery. In fact, I’m singularly unlucky in that respect. However, the few times I’ve won something, I’ve known I would win. I get “the feeling,” almost a lightheadedness. And “the feeling” is never wrong. Once at a writers’ conference, I was in a workshop where they were giving away door prizes. Before my name was called, I’d put down the papers on my lap and started to stand. I’d gotten “the feeling” and knew I would win. If I were to ever win big in the lottery, I’d get “the feeling” when I bought the ticket. So far that hasn’t happened.

Several years ago I had an encounter with what I believe was an angel. That day, driving back to work on my lunch hour I was stopped at an intersection. My light turned green and I started across the road. Suddenly I felt a tingling on the back of my neck, like someone breathing on my skin. Something told me to stop. I put on my brakes just as two young women sped past in another car, running the opposite red light. They never even slowed down. I may have died that day but for my “angel” whispering for me to stop.

Do you believe in reincarnation? Things have happened in my life to make me believe reincarnation is real. When I was a small child, my grandmother had paintings of scenes from Ancient Rome hanging in her house. I’d stare at those paintings and know what it was like to live there. I used to have dreams where I was dressed in flowing Roman clothes and standing in a garden decorated with Roman statuary. To this day whenever I see a wooden door in a stone wall leading to a garden, I get chills. I truly believe that in a past life I lived in Ancient Rome and had a garden with a wooden door.

When my son was three or four, he used to tell my husband and me that when he lived with his “other daddy” he had a black dog that lay at the bottom of the stairs. My son has had only one daddy, and we’re a cat family. We’ve never had a dog. I got chills every time my son told us that story. As he got older, any memories he had of his “other daddy” and the black dog left him. Children remember their past lives because they’re still close to those lives. I believe my son and I both had past life memories when we were children.

A friend once told me that when her little brother was three years old, he’d tell the family stories of living in Paris, France, in the 1700’s. He’d describe the sounds of the carriage wheels and the smells of the city. How would he have known that, especially the smells? He couldn’t even read.

I believe old houses retain an aura from the spirits of all the people who’d lived in them. Some auras are good, some not so much. A friend and I once spent a day touring beautiful old houses on one of those charity events where people open their homes to the public. My friend and I may have been extra sensitive to psychic feelings that day, but each time we went into a house, we felt its “spirit.” Some spirits were loving, but others were tinged with evil as if something bad had happened there. I still get shivers thinking about it.

Places are haunted too with the actual ghosts, rather than the auras, of ones who’d lived there. Another friend told the story of the time she had dinner at an old inn in Pennsylvania. When my friend went up the stairs to the ladies room, she saw a shimmering figure on the landing. She described it as the bottom half of a man clad in Civil War garb. Sure enough, the inn was said to be haunted by a Civil War soldier and also by a little girl who cried a lot. Other restaurant patrons reported hearing a little girl cry.

My psychic experiences are small, but I’ve had enough to convince me we are surrounded by otherworldly beings, and that each of us holds the key to opening ourselves up to these spirits. We also possess knowledge of our past lives, but that knowledge is hidden. What do you think? Have you had any paranormal activity in your lives?

I’d like to thank Cara for visiting today.  She can be found at her website, on Facebook, and on Twitter.  Cara is also coming back to my blog later in the month to talk about her other books.  So stay tuned, and come back over to learn more on May 23rd and 26th.