Today we are welcoming Carolyn Brown, author of Love Drunk Cowboy.  I’ve read this book and will be posting a review tomorrow!  I’ll also be announcing a giveaway of some copies of this book!  Drop back by to read what I thought of this book with the cool red cowboy boots on the cover (gotta love those boots!).

Without further ado – here’s what Carolyn has to say: 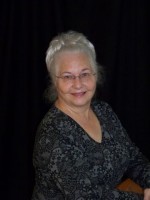 Howdy everyone! It’s great to be here today. I’ve been busy since the first of the month telling everyone who’ll stand still and listen about Love Drunk Cowboy! It hit the book shelves the first day of May and we haven’t slowed down since. It’s the first book in the Spikes & Spurs series, which started off as a trilogy and has grown into a seven book series. Red’s Hot Cowboy will be out in September and Darn Good Cowboy Christmas in October; with four more coming after that that are still waiting patiently for titles.

Love Drunk Cowboy is about Rye O’Donnell, a cowboy who thought that love-at-first-sight stuff was for song writers and wimps; and he was absolutely positive that it did not happen in real life. Until he laid eyes on Austin Lanier! Then he was bitten! But she was a big city girl who would never be content in his dusty corner of the world or with a rough old cowboy in scuffed up boots and a sweaty cowboy hat.

Austin Lanier had spent her life climbing up the corporate ladder of success…in her high heels and power suits. She just wanted to settle up her grandmother’s estate, get into her little sports car and go back to her big city life. Until she say Rye O’Donnell and found the watermelon wine cellar. Then the struggle was on.

When I was invited to your site to sit a spell and visit with you folks, someone asked me to talk about what my biggest inspiration has been during my writing career?

I’ve had to think about that for a while because there have been many during the past fourteen years. My first sale was for two books on the same day and since then I’ve sold sixty three books and to name one single biggest inspiration is not easy.

First of all there are my editors that continue to buy my works. That’s a really big inspiration! If an editor is excited about the next book or the next trilogy or series, then that’ll sure enough spur an author right on to write more and better! And I’ve had fabulous editors!

Then there’s seeing the books in print, right up there on the bookshelves in the book stores for all the world to see. That’s an inspiration that makes my heart float right up to the book store ceiling and hang there like a helium balloon.

And all my other author friends who squeal and dance jigs with me every time I sell another book or series, who pat me on the back when I get good reviews and awards! Inspiration, deluxe!

Reviews have to be in the list. Bad ones inspire us to do better. Good ones, well, there’s nothing like knowing someone really enjoyed the book.

Authors that we read when we aren’t writing are a really big boost: like LaVyrle Spencer, Nora Roberts, Joanne Kennedy, C.H. Admirand and a whole host of others. They show us how it’s done and prove that the sky is the limit!

But when it comes right down to the biggest inspiration? That would have to be the three F’s!

Family: My husband married a woman who tailor made his three piece suits, put three meals on the table and kept a spotless house. He now wears sale clothes right off the rack, eats take out more than home cooked and has learned to listen to bedtimes stories by the dust bunnies under the bed while I finish one more chapter. And he keeps a smile and encourages me to keep writing. Then there are aunts, cousins, sisters, brothers and kids who vie for the next book so they can be the first to read it and lord it over the rest of the family. Now, that’s inspiration.

Friends: Those wonderful folks who tell me that they knew I could get this far and keep asking if it’s time to say, “I knew her when…” Inspiration, again!

And fans: Who continue to buy and read my work. Who tell their friends about the books over lunch dates; who brag up my newest book to the neighbor over the backyard fence; who donate their used copies to the library! And who take time to write notes to me when they finish my books. Some times a fan letter gives me just that little extra boost to make it a six thousand word day rather than my normal five thousand word day.

The three F’s! Those folks are the true wind beneath my wings, and darlin’ some days it takes all them to keep me afloat.

I’d love to hear who and what has been your inspiration in your career or life. Come on in to Sugarbeat’s and sit a spell. Ask questions. Comment. I’d love to hear from you.

LOVE DRUNK COWBOY BY CAROLYN BROWN – IN STORES MAY 2011

He’s as Intoxicating as Can Be…
Rancher Rye O’Donnell thinks he’s going to get a good deal on his dream property—until he meets the fiery new owner. Rye is knocked sideways when he realizes that not only is Granny Lanier’s city-slicker granddaughter a savvy businesswoman, she’s also sexy as hell…

ABOUT THE AUTHOR
Carolyn Brown is an award-winning author who has published 36 bestselling romances for the library market. She now writes bestselling single title cowboy and country music mass market romances. Born in Texas and raised in southern Oklahoma, Carolyn and her husband now make their home in the town of Davis, Oklahoma. Carolyn’s next book, Red’s Hot Cowboy will be in stores in August 2011, followed by Darn Good Cowboy Christmas in October 2011. For more information, please visit  www.carolynlbrown.com and www.sourcebookscasablanca.com.

I’d like to thank Carolyn for dropping by!  As I said before I’ll be giving away some copies of this book, but you’ll find the form with tomorrow’s post 🙂  Give you a reason to drop back by to visit!  Here’s a hint, however, if you leave Carolyn a question, I’ll be handing out extra entries 🙂  See you tomorrow!