Today we are talking to P.J. Jones about her latest book called Romance Novel.  Romance novel is being toured by Goddessfish Promotions and during this promotion  P.J. Jones is giving away a $15.00 Gift Certificate to Amazon or Starbucks(my most favorite place).  To be entered, just leave a comment and an e-mail address so that we can get hold of you if you win.  To increase your chances of winning, click HERE to get the tour schedule and comment on as many blogs as you can. 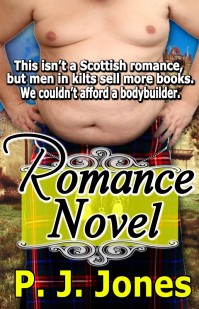 As you can tell from the cover art above, this isn’t your usual romance novel!!  Just the cover art alone had me putting this book on my wish list before I’d even read the blurb.

I’m not a closet romance reader. I love reading romance and am not ashamed to admit it. I’ve even loved writing them. But what I LOVE the most is to make fun of them. Is that wrong?

I started sneaking my mom’s romances into my bedroom when I was twelve. I’ve been hooked ever since. There is a stigma attached to romances, especially the steamier stories. Even though I have a Kindle now, I’ve never felt embarrassed going into the bookstore and buying romance books. I don’t care what other people think of my tastes in literature. I read for my own pleasure, not for anyone else’s.   Currently, some of my favorite authors are CJ Wilson, Julianne Maclean, Donna Grant and Paula Quinn.

One of my other great life pleasures is laughing and making others laugh. I love comedy so much, I even had to marry someone who shares my twisted sense humor.  Let’s face it, a life without laughter sucks. A life without romance is suckier.  So, hey! Why not pair the two? A novel that would make the reader swoon, gag and gasp while busting a seam .

Romance Novel was born out of my need to laugh when I was going through a health crisis. I find the need for comedy even greater when life takes a downward plunge into the toilet. My health is much improved now, but PJ Jones has tickled my funny bone to the point that I must continue writing books in her name. Currently, I’m finishing up a romantic comedy, not a parody, and have brainstormed ideas for Romance Novel 2. 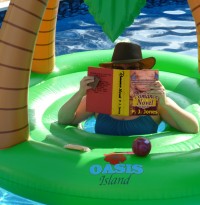 Bio: PJ Jones began writing Romance Novel in the spring of 2009 when she was seriously ill, thinking that this book would be her last dying legacy for mankind. After you read this book, you will probably wonder if she was trying to seal her fate in hell. Who knows? But PJ Jones has conquered her illness and is much better now. But you probably don’t care, as long as her writing is funny. PJ Jones is also an avid reader of real romance novels. So why does she poke fun of them? Consider it comic relief.

PJ Jones can be found at:

Smella Rosepetal must find a millionaire husband to finance her baby’s heart transplant. She flies home to her deputy father’s ranch in Pitchforks, Texas, where she falls in love with Deadward Forest, a wealthy environmentalist vampire.

When a deranged murderer is on the loose in Pitchforks, killing romance heroines, Deadward assumes Smella would be safer without him. Smella turns to her childhood friend, Snake Long, for comfort. But Snake doesn’t have the money to save her baby, so Smella places herself in peril in a desperate hunt for a rich husband.

Time is running out for Smella’s baby, and she must escape the Australian Outback, then face down Flabio, an overweight and disgruntled, aspiring cover model, plus enraged vampire wives and their homosexual, vampire, cowboy husbands, a jealous were-gerbil, James Bond, a drunk rodeo clown and Smella’s strange boyfriend who wants to drain her blood, yet is repulsed by her smell.

“Snake,”  Smella cooed while trailing her fingertip along his bulging biceps. “There’s something I need to ask you.” His eyes widened, and he looked at her with a goofy, hopeful gleam in his eyes. “You want me to be the father of your illegitimate child?”

“Don’t be silly.” She swatted his shoulder while rolling her eyes. “I was wondering if you knew anything about Deadward Forest.”

Snake winced, a gleam of anger flashing across his features. “Why do you want to know about pasty face?”

“Are you joking?” He spat. “Deadward is a bloodsucker, just like the rest of his family.”

“Bloodsuckers? Really?” Smella perked, the visualization of heaping wads of money making her mouth water. “So that’s how he got rich. Do they handle personal injuries or divorces?”

“Neither, Smella.” Snake shook his head, while jumping out of the truck and slamming the imaginary door. “You need to stay away from The Forests,” he raged, before sweeping Smella into a passionate embrace. “Let me take care of you and the little bastard,” he begged, his eyes turning dark, thunderous.

Mouth agape, Smella stared at Snake. His body was large, strong and warm. She could get lost in his liquid molten gaze. Oh, if only he was rich and white. But now was not the time to be distracted by secondary heroes. She needed a man who could save little Wally.

“Do you have the money to pay for my baby’s heart surgery?” she rasped.

“No,” he said on an exhale, as if his chest had been crushed with the admission.

“Then forget it, Snake!” Smella pushed away, trying hard to ignore her feelings for him as she bemoaned the fact that friendship sex would count as a strike against her virginity. “I’ve already made up my mind.” She spoke without conviction then bit hard on her knuckles in an effort to quell her raging sexual hormones.

“Besides,” she confessed, “even though I don’t know much about Deadward, I’m already irrevocably and unconditionally in love with him.”

I’d like to thank PJ Jones for dropping by my blog today.  Don’t forget to leave a comment to be entered to win the gift card!

Previous Post: « The Wild Card by Rhonda Nelson
Next Post: Support for fundraising auction for L A Banks »