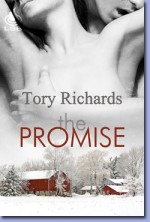 Today we are visiting with Tory Richards, the author of The Promise.  She is touring her new book as part of a Goddess Fish Tour.  For more tour dates and information on this tour, Click Here.  Tory is giving away a $15.00 gift card for Bath & Body to a random commenter for this tour.  To increase your chances, leave a comment here and then click on the link and comment on the other blogs hosting Tory!

Tory has been kind enough to answer some questions so that we can get to know her a bit better.  Here she is:

Barb : Tell us a little bit about The Promise.

Tory: The Promise is a story where a young widow is facing her first holiday season without her husband, and a Marine who returns home for the first time in years to keep a promise he made to his dying brother. And that is to take care of his wife and baby. The Marine has been secretly in love with his brother’s wife for years, and guilt over that makes him reluctant to keep his promise. When the two come together at the farm, where the family has gathered for the holiday season, the attraction between them blossoms rapidly. Forcing them to make a decision about themselves and their future.

Barb : What was your favorite part to write?

Tory : The bar scene where the hero and heroine dance together for the first time.

Barb : Do you have a character in this book that you like or relate to more than the others?

Tory : I can relate to Marsha, head of the Hayes family. She holds everything together. And the happiness of her family is very important to her.

Barb :  If you could ask your readers a question, what would it be?

Barb :  What is your favorite genre to read and what are you currently reading?

Barb :  What is your next project?

Barb :  Who are your cheerleaders – who encourages your writing?

Tory : My family of course! And a few close friends.

Barb :  I can list all your contact points, but what is the best way for your readers to stay in touch?

Tory : I love to hear from readers! My email addy is: tory.richards@yahoo.com

I’d like to thank Tory for visiting with us today!  Be sure to comment at the bottom to enter the giveaway.  I thought I’d give you a bit more information on Tory and her book.

A little about Tory Richards…

Tory is a multi-published, best-selling author who was born in Maine but lives in Florida with three crazy cats. She likes to travel, preferably by cruise ship, and doesn’t like to fly but she will if she has to. She collects antiques and art, loves chocolate (who doesn’t?) and good coffee.

Tory has wanted to be a writer since she was a kid, but life got in the way of her dreams. A few years ago, with the support and encouragement of her family, she decided to get serious. Her romances are laced with humor and filled with suspense and sizzling sex.

And now a short excerpt….

“Damn it to hell!” Ryan swore under his breath, after Shannon took off. The kitchen door was still swinging back and forth and he could hear her running up the stairs. He should have known she’d be there. After all, she was part of the family. And always would be now that she had Alivia.

Why the hell had he come home? He knew the answer to that the minute the thought materialized. Because of the vow he’d made to David. But that was only the half of it.

He dropped his fork, made a tight fist, anxious to hit someone. If flying shrapnel hadn’t wounded him, and he didn’t have a leg on the mend he probably wouldn’t have come back. He could have remained on base during the holidays. Only the thought of staying there alone hadn’t been very appealing. And maybe deep down he’d wanted to see Shannon again. Wanted to see if he still found her as attractive as he had the first time he’d laid his eyes on her.

It was worse than he remembered. The years he’d remained away had been for nothing, he could see that now. What he’d thought had diminished over time had sprung to life the moment he’d opened the front door and fell headfirst into her cat-like eyes. Every time he made the mistake of looking at her sensuous mouth all he wanted to do was grab her and kiss her breathless.

Maybe he was being punished for all the lives he’d taken. Slowly being driven insane by a woman he couldn’t have. Everyone had to pay penance for their sins but did it have to come in the way of his dead brother’s wife? The only thing he could hope for was that Shannon never realized how he felt. And the only way that could happen was to stay the hell away from her.

Releasing an angry breath he got to his feet, taking his plate to the fridge, his appetite gone now. He might as well get a shower and turn in, and pray for a night of relief. As he limped through the house, he flipped off the lights, and grabbed his duffel bag before heading up stairs. The heat from the shower would do his leg good.

His bedroom was the first one at the top of the stairs. It was only natural to open the door without knocking. He had no reason to believe he’d find anyone in there. But as the door swung open the first thing his gaze landed on was that his bed had been turned down, the playpen and then the huge suitcase on the floor next to it.

The second thing he noticed was humming coming from the bathroom…