Welcome to Sugarbeat’s Books – the Home of the Romance Novel!

Today I am welcoming E.D. Walker to my blog.  She is currently promoting her novel, The Beauty’s Beast.  As you all know, I am fascinated by where an author’s inspiration comes from.  So, for her guest post, I asked E. D. to talk on the topic of Inspiration.  Here’s what she had to say:

How I Make Things Up

“Where do you get your ideas from?”

This has got to be one of the most asked questions for any author, from the newbie’s to the most established. And every author answers this in their own way. There’s a great Neil Gaiman quote from an interview a few years ago. Someone asked him where he

gets his ideas from and the great author replied, “I make things up. Out of my head.”

As answers go it’s not the most illuminating, but, for all that, it is accurate. No matter where the first spark of a story comes from, ultimately, it all comes down to you, the writer, making things up. Out of your head.

But allow me to elaborate on my own process a little. I’ve had story ideas come to me from all manner of places. My second novel, Heir to the Underworld, was partially inspired by the campy Hercules and Xena live action shows and their emphasis on the Greek gods that I used to watch as a kid.

My first novel, The Beauty’s Beast, has a slightly more interesting origin story. A few years ago I was in community college working on finishing my general education requirements so I could transfer to a four year school. I took a World Literature class that basically covered everything from the Greek tragedies to the Renaissance. In the middle of that time span, my professor assigned this somewhat obscure medieval poem, “Bisclavret” by Marie de France, about a werewolf knight. Just that two word description was enough to get me all excited: Werewolf. Knight. The possibilities seemed mighty appealing but nothing really gelled for me. I just kept re-reading the poem and fan-girling over how awesome it was as a premise without having a solid idea for how I could make it my own.

Right around that same time I became obsessed with that Orlando Bloom crusade movie Kingdom of Heaven. That thing is Epic. (Yes, with a capital E). I re-watched it a million times (and not just because Orlando Bloom is sexy.) One fateful night I had the movie on while I just happened to be re-reading “Bisclavret”. Suddenly, I had that little zing going through my nerves that I think most writers get when an idea finally solidifies for them. I finally had my starting point, and my brain had finally produced for me the “voice” of my werewolf hero, Gabriel. With Orlando Bloom still hacking and slashing on the TV, I grabbed my school notebook and started writing the first scene of what became my first published novel The Beauty’s Beast.

As the story progressed it grew and expanded to include more influences, more little creative tidbits that I cherry-picked and wove into the tapestry of my narrative. A little bit of A Thousand and One Nights. Arthurian legend. Medieval history. A little Beauty and the Beast fairy tale. Some Cinderella. And some stuff all my own. (Like the heroine’s slightly wry sense of humor.)

Ultimately, I would say that a story simply can’t have one idea, one influence. Any long form story will always be a mishmash of other ideas, other influences. It is how the author weaves the disparate elements of their imagination together that determines the strength and beauty of the narrative.

Where do my ideas come from? Everywhere. Nowhere…or, as Neil Gaiman said it, I simply make things up. Out of my head.

I’d like to thank E. D. for visiting today and sharing her thoughts on Inspiration – my personal favorite topic! Keep reading and find out about her book and where you can pick up a copy. 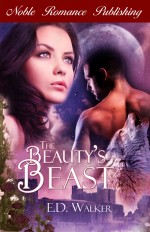 Lady Kathryn’s father has sent her to court to find a husband, but being penniless and disinterested doesn’t bode well for her success. Bored by the petty intrigues of court, she finds her loneliness is eased when the king charges her with the care of his newest acquisition: an uncanny black wolf. What the king doesn’t realize is his remarkable pet was once Gabriel, his favorite knight, cursed into wolf form by an unfaithful wife.

The beast’s too-knowing eyes and the way he seems to understand her every utterance convinces Kathryn the wolf is more than what he seems. Resolving to restore him, she doesn’t count on the greatest obstacle being Gabriel himself. The longer he stays in wolf form as a captive of the court, the harder it becomes for him to remember his humanity. And to fight his wolfish urges to maim and kill.

Only Kathryn’s affection and determination stand between Gabriel the wolf and Gabriel the man. But when the one who betrayed Gabriel returns to court, will Kathryn’s love be enough to keep Gabriel from exacting a brutish revenge that will condemn the wolf to death?

Author Bio:
E.D. Walker is a SoCal native with a BA in English Lit from Berkeley (GO BEARS!) who came of age with her nose stuck in a book and an obese cat kneading his claws in her lap. These days her nose is glued to her laptop as she pounds out her latest manuscript, and the obese cat, well, he just has to lie in wait until she goes to bed so he can knead his claws in her shoulder at 3am. And drool.

She has two fantasy romance novels available now as eBooks: a sweet paranormal-historical starring a werewolf knight, THE BEAUTY’S BEAST, which finaled for “Best First Book” in RWI’s More Than Magic contest, and a YA fantasy with Greek gods run amok, HEIR TO THE UNDERWORLD.

Currently she is working on her first contemporary romance, a fun RomCom romp a la Jennifer Crusie or Victoria Dahl.

Or you can always just email her at:
e.d.walker.author(at)gmail.com

E.D. Walker’s first book, The Beauty’s Beast, a paranormal-historical romance about an accursed werewolf is now available wherever e-books are sold.