Welcome to Sugarbeat’s Book – the Home of the Romance Novel

Today we are talking to Tara Woolpy, author of Releasing Gillian’s Wolves.

I’m looking forward to introducing Tara to you, and encouraging you to read her book!  As soon as I clear off the 150 odd books on my teetering TBR pile, this book is certainly on my list!  That is as soon as my husband’s back is turned and I can sneak it into the house!  Without further ado, here’s Tara!

Barb – How would you describe Releasing Gillian’s Wolves in 20 words or less without using the blurb?

Tara – Her congressman husband has never been faithful. His latest is twenty. Fed up, Gillian meets Luke, her happy ending.

Barb – Tell me a little about yourself.

Tara – I’m a semi-retired biologist who teaches online and writes novels in her spare time. I live in lovely Northern Wisconsin with my wonderful husband and our very friendly boston terrier.

Barb –  Have you always wanted to be a writer?

Tara – Yes. I spent my twenties writing poems, short stories and a very bad first novel which no one will ever read. Unfortunately that didn’t pay the rent, so I went back to school and became a college biology professor. A few years ago I stepped away from full time teaching and gratefully returned to writing.

Barb –  What do you love about writing?

Tara – That’s a great question. I love losing myself in the process. It’s addictive. I think I’d have to go into rehab if I wanted to quit.

Barb –  What’s the hardest part of writing a book?

Tara – For me there’s a section in the middle of the first draft that feels like trudging through a mosquito infested swamp. If I can slog through that I know the rest will be comparatively easy.

Barb – Which character do you most relate to – or like the most?

Tara – When I was deep into Releasing Gillian’s Wolves I heard a radio program about the science of personality. I came away with an image of personality as a multi-headed snake with each head a different aspect of an individual’s personality. That resonated for me because there are aspects me in of Gillian, Edward and Sam. But of course, my favorite character has to be Luke. I find him incredibly sexy.

Barb –  What was your favorite scene?

Tara – It’s probably my quirky sense of humor but I love the STD clinic scene. First because it’s such a twenty-first century seduction moment and secondly because the seduction… well, if you’ve read it, you know.

Barb – Who are your cheerleaders? Who keep you writing?

Tara – My oldest friend (ok, she’s only a year older than me), my terrifically supportive husband and my dog, who curls up in the chair behind me as I write.

Tara – I get my inspiration from everything around me. I slice up memories from my life and mix them with overheard conversations, articles I read in the paper, scenes from movies and novels, whatever is available and cook them into a literary stone soup.

Barb – What book is currently on your nightstand?

Tara – This is going to sound pretentious, but I’m currently reading Jane Austen’s Persuasion. Don’t worry, I’m balancing it out with the audio version of a lovely mystery, The Sculptress, by Sandra Burr.

Barb –  If you could ask your readers one question, what would it be?

Tara – Tell me about the Jack in your life. A friend of mine said that Jack is everyone’s first husband. Obviously cheating husbands aren’t the universal experience, but all of us have been betrayed once or twice. I’d love to know how Gillian’s experience of that compares to what my readers have lived through.

Barb – How can readers stay in touch?

Tara – I recently opened a twitter account under the username @TaraWoolpy, although I haven’t posted anything yet. I’m hoping I’ll get the courage to tweet very soon.  I’m also available on email at tara@batsintheboathouse.com and my characters and I occasionally blog at http://www.batsintheboathouse.com/lacland-news-blog.html.

Barb – Where is your work available?

Tara – Releasing Gillian’s Wolves is available through Amazon and Barnes and Noble and the ebook version will also soon be available at the Apple iBookstore and Sony’s Reader Store.

Barb –  What is in the works for you next?

Tara – I’m in the final editing stage for the next Lacland novel. The Lacland series involves novels with overlapping characters, each told by a different resident of the same fictional small town. This next book is Edward’s story, set a few years down the road from Releasing Gillian’s Wolves, when he and Sam contemplate adopting a child. 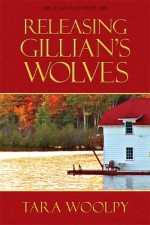 We frequently see women standing by their Senator/Congressman/Religious figure husbands at press conferences and wonder why they stay as their spouses admit to all sorts of bad behavior.

Bats in the Boathouse Press is proud to announce the publication of Releasing Gillian’s Wolves, the story of just such a political wife, why she stays and what happens when she finally decides to let go.

Thirty years ago Gillian married Jack Sach, now a United States Congressman. Through the years she’s remained faithful. He hasn’t. Ever. She cooks to soothe herself and others, takes care of her mother-in-law, gardens, sneaks off to the studio to explode with angry paintings and tries to keep Jack’s dalliances secret,. As she nears fifty, her friends think she should leave but she lingers, bound by inertia and fear of the effect media coverage of a divorce would have on her family.

Gillian shares a trust fund with Edward, her gay neighbor and best friend. Their grandfathers made a fortune together and left it to the two of them. Over the years, in support of Gillian’s marriage, the trust bankrolled Jack’s many successful campaigns. Not particularly interested in politics, Gillian survives by ignoring everything outside her kitchen, garden and studio. Edward has his own ragged past filled with bad relationships, drugs and alcohol. Through the course of a summer, Gillian’s marriage continues to deteriorate while Edward’s life finally starts to improve. He’s sober, stable and has just found life-changing love with Sam, a Biology professor at the local university. Their happiness shines a stark light on Gillian’s loveless marriage. Finally, when Gillian meets Jack’s latest conquest, twenty-year-old Ashley, she’s forced to confront the rot at the core of her relationship. She travels to Amsterdam, meets Luke, an intriguing Dutch sculptor, and discovers it is never too late for happiness.

Bio:  Tara Woolpy’s writing career has followed a somewhat unusual trajectory. Throughout her twenties and early thirties she worked hard to learn her craft. Her formal studies included a B.A. in English Literature from Whitworth College and a post graduate year at the Women Writers Center in Cazenovia, New York. In the 1980’s she published poems and short stories in small feminist journals, freelanced for an independent Seattle newspaper and wrote the novel destined for the bottom drawer. Eventually returning to school, she earned a couple graduate degrees in aquatic science and has spent the last several years in that field, most recently as a tenured professor at the University of Wisconsin-Green Bay. As such she published peer-reviewed technical papers and book chapters and edited reams of student writing. Now that she teaches online, she has returned to fiction.

Releasing Gillian’s Wolves is far from autobiographical. However, tidbits from Tara’s personal history are woven into the novel. She imbibed campaigns and politics with her mother’s milk, her mother represented Northern Idaho in the State Senate for seven terms. She currently lives in a house very like Edward’s, works in Sam’s academic field, has survived more than one bad marriage. She has also finally found her own happy ending on a lake in Northern Wisconsin with a wonderful supportive husband and a very friendly Boston terrier.

On her way to happily ever after, Tara has published under a number of last names (Woolpy, Reed, Danaan and Reed-Andersen).

I’d like to thank Tara for sharing a bit of herself and her new book with us today!  It is of my honest opinion that since this book is written by a scientist – it must be good 🙂  All kidding aside, I love what I’ve heard about this book.  Drop by and pick up a copy and let us know what you think of it!

Previous Post: « Winner of A Gentleman Never Tells by Amelia Gray
Next Post: Just One Season in London by Leigh Michaels »