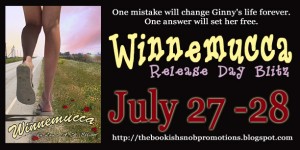 Today is the release day for a new YA book that has already received considerable attention!  Winnemucca is Laura A. H. Elliot’s first novel and in order to celebrate it’s release properly, she is giving away copies of her book.  Here’s the quote from her site about the giveaway:

The giveaway: I have five books and the $15 Amazon gift cert. to giveaway. I’ll monitor comments on the blogs and pick a random winner.

Here are the rules: I’m going to giveaway five copies of Winnemucca [the digitally signed, Wounded Warriors Edition] during the blitz and one Amazon $15 gift certificate. To win, I’d like readers to leave their road trip story in thecomments of the blogger [with their email address in case of a win!]. I’d also like them to also “like” me at http://www.facebook.com/Laura.A.H.Elliott Giveaway goes until 10PM July 28th, PST.

Sounds like an easy giveaway to me!  Just leave a comment with your e-mail address and your road trip story.  Go over to Facebook and “like” Laura.  That’s all that is needed – oh yes, and to cross your fingers 🙂  Let’s learn more about this book.

releases her young-adult debut novel, Winnemucca, for the Kindle on Amazon.com. Winnemucca is a small-town fairy tale about a teenage girl’s enchanted road trip to her true self no matter who or what tries to stop her. One of two digital editions includes Laura’s digital signature with a donation to the Wounded Warrior project, in her nephew’s honor. Trailer: http://www.youtube.com/watch?v=qa9n1KIpaWw

“The story is told in poetic prose that I have not read since the writers of an older age. The tone of the story is set through the voice of the girl runaway before she has even realized her own talents, and is spoken with ‘the sound truth makes being said,’ as Ray Bradbury once coined the term. Emerging from a sea of derivative and formulaic novels, WINNEMUCCA is a fresh view of a world that is at once savage and beautiful, crushing and hopeful, and above all, brings magic back to ancient storytelling by bringing our attention back to the little things that matter, and the shifting nature of perception and reality alike.” -Rachel Coles, YA Book Reviewer and Author of 5 Young Adult Paranormal Fiction Novels

“The voice is distinct and the world she creates is both magical and mundane. As I read the book it reminded me of Neil Gaiman’s AMERICAN GODS.” -Matthew Hill, editor

“The themes in my work are always the same: freedom and forgiveness. I am fascinated how the footprints of our ancestors can follow us into the future. I enjoy illuminating these ideas in my fiction. In this novel, I explore courage and the cost of freedom. I’m hoping WINNEMUCCA will get generations of people talking to each other about the role of freedom and forgiveness in their lives.” – Laura A. H. Elliott. Her favorite quote from the book: “Fear’s as blind as love.”

Laura’s travel and personal essays have been published in The Los Angeles Times and other Southern California newspapers and magazines. She honed her storytelling skills as a multimedia designer at The Los Angeles Times and E! Entertainment Television but learns the most around dinner tables. She has two grown daughters and currently resides on the Monterey Peninsula, with her husband, Joe, and their Aussie shepherd, Oso.

Laura In The News:

For news coverage about our nephew, Cody: 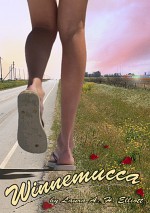 One mistake changes her life forever. One answer will set her free.

Once upon a time Ginny’s road blood ripened, the day she got wise to love. Engaged to the high school quarterback, his quarter-carat ring and enchanting smile should have been enough for her. But, she stands him up and takes a walk where every step questions her happily ever after gone-bad and the fate of the mother she never knew. The mother her father refuses to talk about. Ginny fights to untangle her big, fat, lie-of-a-life on an enchanted road trip to Winnemucca, where she believes all her answers lie, no matter who or what tries to stop her.