Today is a review of a YA Paranormal book that is currently being toured by BLB Book Tours,  Boyfriend from Hell by E. Van Lowe!  Tomorrow, the author will drop by and visit.  Be sure to drop by tomorrow to find out more about E. Van Lowe! 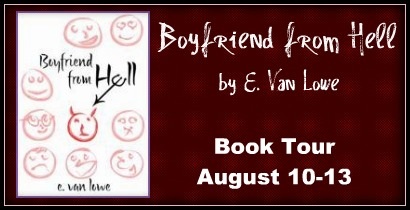 Fifteen year-old Megan Barnett and her single mom, Suze, have a special relationship—they are friends, close friends, who do almost everything together.

“But come on, guys, she’s my mother… Can I really tell her that while we’re snuggled up on the sofa watching Spider Man Three, I’m secretly undressing James Franco with my eyes?  Of course not…”

The special bond takes a turn for the worse when Suze decides to start dating again.  She hasn’t had a man in her life since Megan’s father left ten years ago.

Enter two mysterious young men, Megan’s new classmate, sinfully attractive bad boy, Guy Matson, and the dangerously handsome art dealer, Armando.  Before long Megan and Suze both wind up in steamy relationships.  But neither of the handsome pair is quite what he seems.  In fact, one of them is Satan, with his sights set on a new bride.  Megan has precious little time to figure out how to stop him.  If she doesn’t, either Megan or Suze are quite literally going to HELL.

Boyfriend From Hell is the first book in the Falling Angels Saga from the author of the gruesomely hilarious, Never Slow Dance With A Zombie

Boyfriend from hell by E. Van Lowe is a YA Paranormal that is part of BLB Book Tour’s latest tour.  Megan Barnett and her mom Suze have been living a perfectly comfortable life since Megan’s father left some time ago.  They have a close relationship!  When Suze announces that she’s thinking about dating, Megan is a bit taken aback.  Who wouldn’t be concerned about their mom dating after so many years.  Megan is concerned that her mom is interested in having more children before she gets much older, and that is the motivation behind dating again.  When Megan meets Armando, her mother’s new boyfriend, he seems too good to be true!  He good looking, never been married, a successful gallery owner and very charming.  Megan’s concerns are escalated when she goes to a gallery event with her mom and has a weird older woman stare at her the entire time.  A few days later, Megan follows this woman home and runs into Armando.  While all this is going on, a yummy teen joins the math club at school and befriends Megan.  She happy that such a good looking guy would want to date her and doesn’t look beneath the surface.  Meanwhile, her two best friends, Matt and Erin have decided to date and increasingly leave her out of their activities.  I’ll leave the rest of the story for you to discover!

You have to admit that the cover is pretty interesting.  It’s what caught my attention when this book first came across my computer some time ago.  As you all know, I tend to pick books by their covers!  No, this isn’t a glittering ball gown picture, but it is intriguing none-the-less!  I’m normally not a huge fan of YA but this book kept me interested and reading.  I could identify with both the mother and the daughter.  The mother wondering if she could still have the large family she had always dreamed of having, and the daughter apprehensive of her mom re-entering the dating scene.  The interaction between mother and daughter was well written, but the interaction between Megan and her various friend carried the book.  The story of Megan trying to get someone to listen to her concerns and not think she was crazy was incredibly well written.  I admired her determination to expose Armando for who he is.  There are little twists and turns to the story which keep the reader guessing.  The story line is well written, enjoyable, and has the reader cheering for Megan to succeed all the way through the book!

A delightful read and one that I would certainly recommend to a fan of YA Paranormal books!  Drop by tomorrow when we will have an interview with E. Van Lowe!