Today we are going to learn more about Pepper O’Neal and her book Blood Fest: Chasing Destiny.  Yesterday she posted about her characters, and today she has graciously supplied us with an excerpt to read.  What better way to find out if this book is for you!  Without further ado, here’s some more information about her book! 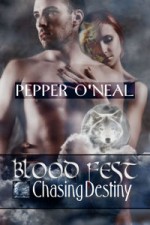 A struggling private detective in Los Angeles, Chase Alcott has no idea about her unique genetic makeup. So when she takes on a new client—an old man with ulterior motives—she’s unaware of the danger she’ll soon face. Traveling to England to solve a mysterious murder at the request of her new client, Chase encounters terrifying creatures she thought only existed in her nightmares—only to find out she’s one of them. Caught in a web of evil and deception after learning some terrifying truths about her long dead parents, Chase doesn’t know who to believe. Does she dare trust the enigmatic Roman, a man with dark secrets of his own?

English nobleman, Roman Fernwood, half-werewolf/half-vampire, doesn’t want a mate, especially not a half human/ half-weretiger with no knowledge of what she is. But there’s something about Chase, Roman can’t resist in spite of his determination not to fall in love. Is it her fascinating American spunk and courage, or her stunning cinnamon eyes? Or could it be the passion he senses just beneath her calm, unruffled demeanor? Whatever it is, Roman must keep her safe from those who want to kill her while finding a way to show her what she is without driving her into the arms of the other were who also want her for a mate.

Fate should have considered the consequences before messing with Mother Nature.

A paranormal romantic suspense for all adventurous readers.

If you think that sounds interesting…..here’s an excerpt:

“Damn it, he’s getting away!” Scrambling into the passenger seat of David’s Honda, Chase watched Steve Nolan’s Porsche zigzag through the afternoon traffic and zip around a corner. “Do you have any idea how long it took me to track that bastard down and convince him to come talk to us?”

“Yeah, about as long as it took me to ferret out his name in the first place.” David peeled out of their office parking lot, inundating the car with the smell of burning rubber. “Guess we should’ve tied him to the chair before we told him what we were really after.”

“You think?” She braced her arms on the dashboard as he squealed through a left turn. “I’ll keep that in mind. Not that it’ll do us any good if you lose him.”

She didn’t have time for this shit. The client wanted results. Yesterday. Yet, even if they caught up with Nolan, then what? How the hell could she make him talk?

Like an idiot, she had guaranteed her client she’d clear his name. But without the information Nolan refused to give her, the investigation was dead. And she’d been so close. Now she’d have to return the client’s deposit—money she needed to keep her struggling PI business afloat.

Just once, couldn’t things go right? No, that’d be too much to ask.

“Jesus,” she snapped. “That was a red light you just ran. Are you deliberately trying to kill us?”

“You told me not to lose him,” he said, swerving out of the path of a car. “If I’d stopped for the light, we would have.”

“My bad.” She shot him a dirty look. “Just don’t scrunch us. Okay?” Turning back to the window, she scanned the traffic. “There! Two blocks up. Looks like he’s turning right at the light.”

Nolan suddenly whipped across three lanes of traffic and headed for the freeway.

“He’s seen us. Hit the gas. If we lose sight of him again, we’re screwed.” When he didn’t respond, she groaned. “You can’t turn into a wuss on me now. Come on, damn it, punch it.”

He cursed but stomped on the gas. The car shot forward, zipped around a truck, and darted into the right lane—just as an elderly man stepped into the street from between two parked cars.

“Look out!” She held her breath, prayed.

David slammed on the brakes. The Honda screeched to a halt, but it was too late. The old man bounced off the right front fender, crumpling out of sight.

His face was pale and pinched with pain, his eyes closed. His left leg stuck out at an odd angle, obviously broken. But at least he was alive.

Weak with relief, she sank to her knees beside him. “Everything’s going to be okay,” she promised, though she didn’t like the look of his aura. It was faint, a pale gray tinged with a hint of muddy blue.

David hurried over, talking on his cell phone.

She shook her head. “It was more my fault than yours.”

The old man’s eyes fluttered open then widened as he stared up at her. A look of triumph flashed over his worn, pain-contorted features. “Chase?” he asked in a clipped British accent. “Would you be Chase Alcott, the private detective? With an office three blocks down?” She nodded. “Splendid,” he said. “I was on my way to see you.”

She blinked. “You were? What did—” The question died on her lips as the man’s eyes rolled back in his head. “Shit.”

Sirens screamed in the distance. Looks like we’re going to be stuck here for a while. Tears burned the back of her throat. Nolan was long gone. Why the hell couldn’t she ever get a frigging break?

Rain dripped down the back of Roman’s neck and trailed along his spine like cold, wet fingers. Forcing himself to ignore the disturbing sensations, he focused instead on the preacher’s droning voice and the coffin being lowered into Melinda’s grave.

“This wasn’t an accident, Andy,” he whispered to his solicitor. “I tried to tell Chief Inspector Clayton that, but he wouldn’t listen.”

Stepping closer to Roman, Andrew Wright shifted his umbrella to shelter the both of them. “Have you considered going to his superiors?”

“Yes. But I doubt it would do any good. They’d be as stumped by the lack of motive as Clayton.”

The parish priest closed the graveside service with a prayer. Finally. Breathing a communal sigh of relief, the two dozen mourners hurried out of the dismal little cemetery.

Roman slowed his pace until he and Andy fell behind the others. “I’m also afraid this may have been done by one of my kind.”

Andy stopped walking and stared at him. “A Lycan or a Vampire?”

“But if that were true, there’d be marks on her—” Breaking off when Roman made shushing gestures, Andy shot a quick, darting glance around the graveyard. “Sorry,” he said in a lowered voice. “Wouldn’t there be some evidence of that?”

“Only if the killer was feeding.”

“Oh. Right. Would you like me to hire a private investigator for you? There must be someone we can trust to look into this.”

“Not until we have a better idea of what we’re dealing with.” Roman started walking again. “Besides, my father will be home soon. And I’d like to discuss the matter with him first.”

“Er, ah—” Andy cleared his throat. “Lord Fernwood’s stay across the pond has been extended. He was involved in a motor vehicle accident yesterday.”

“Oh, Christ!” Roman cringed at the images flooding his mind. “Not him, too.”

“Re—relax. He’s not bad—not seriously injured, I mean.” Andy’s words rushed out, tumbling over one another. “I—I’m sorry. I should have told you that first. He has a broken leg, two broken ribs, and a fair-sized collection of bruises. But that’s all.”

“Thank God.” Overwhelmed by relief, Roman stumbled on legs that didn’t feel attached to his body. He grabbed Andy’s shoulder to steady himself. “How did it happen?”

“From what he told me when he called from the hospital, he was crossing a street in Los Angeles—apparently against the light and in the middle of the road—when he was hit by a car.”

Roman sighed. “That sounds like Father.” Then the implication of Andy’s words hit him. “Wait a minute. Father’s supposed to be in New York. What the hell’s he doing in Los Angeles?”

“I’m afraid I can’t answer that.” Andy paused as they neared Roman’s Rolls Royce. He waited until they were seated inside the limo before continuing. “All I know is what he told me on the phone. He said he’d postponed his meeting in New York and had gone to California to check out something. Or someone. It wasn’t the best connection, so I’m really not sure.”

Roman rubbed a hand over his face. “Well, knowing him, whatever it is, it’s bound to make my life more complicated.”

A chill skittered through him—one that had nothing to do with the weather.