Today I’m welcoming Michelle Franklin to my blog!  She has several books out, but today we are going to learn about her latest books, The Tales of Frewyn and The Commander and the Den Asaan Rautu.  Before I continue to the interview, I must say that I am totally enchanted by the artwork on the cover of Tales from Frewyn.  So different from what I’m used to seeing!

That being said, let’s learn a bit more about Michelle!

Barb –  Tell us a little about yourself

Michelle – I’ve been writing high fantasy and romance stories since I was in grade 4. Now I’m the sole author of the Haanta Series: the longest, ongoing, online romantic fantasy series.

Barb –  Tell us about your new release without using the official blurb?

Michelle – The Commander and the Den Asaan Rautu is the first book in the Haanta Series. It discusses a relationship between Commander Boudicca MacDaede, a wry and strong heroine, and the Den Asaan Rautu, a stubborn giant and warrior. Together, they save the kingdom of Frewyn from annihilation whilst trying to keep their love for one another a secret from Rautu’s people. Tales from Frewyn are short stories about these characters and everyone else in the series, written as vignettes of what the characters do when they aren’t saving the world.

Barb –  Who are your cheerleaders?  Who encourages you to continue writing?

Barb –  What’s the hardest part of writing a book?

Michelle – Doing anything else.

Barb – What’s your favorite part of writing a book?

Michelle – Watching the characters and following them wherever they may go.

Barb –  Which character do you most relate to – or like the most?

Michelle – I cannot pick a favourite, but I can say I identify most with the commander, for she has the audacity to say that which I have only the bravery to think.

Michelle – I often don’t know the titles to my books before I begin writing. Usually they materialize after half of a given book is finished.

Barb – What was your favorite scene?

Michelle – I have a few favourites, most of them involving the characters being made to do something that goes against their nature. Alasdair having terrible hair, Rautu eating a vegetable or Boudicca wearing a dress are situations that accord endless delight.

Barb –  Do you have an all-time favorite book?

Michelle – The Belgariad by David Eddings and most Jane Austen novels are my books of choice.

Michelle – They can be found at any online retailer and some independent bookstores.

Barb –  How can readers stay in touch?

Barb –  What projects are you currently working on right now?

Michelle – I’m currently working on edits for Commander and Den Asaan Vol 2 and writing chapters from book 14 in the series.

I’d like to thank Michelle for dropping by today!  I completely fascinated by these books and their covers!  Please find some blurbs below as well as some buy links so that you can pick up copies of Michelle’s work.

The Haanta Series is the longest, ongoing, online romantic fantasy series. Thousands of readers visit the world of the Two Continents to enjoy the daily short stories featuring all their favorite characters from the Haanta Series novels. In between the business of the books, the commander, Rautu, Otenohi, Unghaahi, Leraa, Kai Linaa and Alasdair enjoy some time together in Diras Castle, but as the stories portray, mischief lies in every corner of the keep where spiders, chocolate pies, petulant giants and grouchy cooks abound. 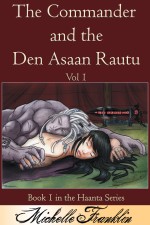 The Kingdom of Frewyn is being invaded by the Galleisian infantry and at the forefront of the battle is Boudicca MacDaede, a First Captain in the Frewyn armed forces. Her regiment is charged with defending the borders between the two nations, but when Frewyn’s last line of defense falls, Captain MacDaede enlists the assistance of a Haanta, one of giants from the islands to the far north. Promising to free him from his imprisonment in exchange for his help, she gains his trust long enough for them to win the battle and save the Frewyn border from being breached. The giant’s freedom is granted, but Rautu cannot return home unless he redeems himself in the eyes of his people for past his transgressions. He is offered a place by the captain’s side, and together, they defeat the Galleisian forces and become the saviors of Frewyn.

One year later, King Alasdair Brennin takes the Frewyn throne, Boudicca is made commander, Gallei and Frewyn reach an accord, and Rautu is granted an invitation home. He is eager to return and see his brothers but finds it difficult to leave Frewyn without Boudicca at his side. He has become accustomed to her company and the idea of being made to live without her begins to distress him. Rautu invites the commander to the islands in hopes of finding a way for them to remain together, but when they arrive at the white shores of Sanhedhran, not everything goes as planned: one of the dangerous Haanta magi is freed, Rautu’s three brothers are strangely missing, and the neighboring nation of Thellis leads an attack on the islands.

Together, the commander and the Den Asaan Rautu must find a way to unite their two nations and defend against the Thellisian fleets, but can they do so successfully when an envious Frewyn king, and impending war with Thellis, and a cruel Haanta military leader would keep them apart?