Welcome also to Series Sunday! On Sundays we celebrate my favorite thing – romance novels that are being written in a series.  Today we are going to start a new series – one written by Vicki Lewis Thompson.  Ms. Thompson has written many books that I have read and enjoyed, but today we are going to start a series of her’s that is being published by Harlequin Blaze called “The Sons of Chance” series.

Wanted!
SONS OF CHANCE: Book One

Source: I received a copy of this book for free from eHarlequin 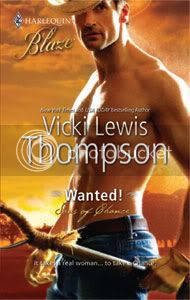 Photographer Dominique Jeffries has come to Wyoming to find herself—her creative self, her sexual self. After escaping the engagement from hell, she’s dying to break loose and live a little. And seducing a shirtless, sweaty cowhand looks like just the place to start.…?Nick Chance isn’t exactly a cowhand but, hey, he’ll be whatever the lady wants! Only he soon realizes that this is more than just a quick roll in the hay.?There’s something about Dominique that calls to him, something about her that completes him. There’s only one problem. Dominique wants a fling, not another relationship. Little does she guess how easily she’ll be persuaded to take a Chance—again and again and again!

Wanted is the first book in the Sons of Chance series by Vicki Lewis Thompson.  I wanted to introduce this series to you with a letter that is included inside the front cover of the book:

Dear Reader,
Welcome to the Sons of Chance series, where the men are hot and the women are happy!  Travel with me down a winding dirt road to the Last Chance Ranch, dedicated to the proposition that we all need a last chance to find whatever we deserve, especially love.

As you sit on the wide front porch of the Last Chance and gaze at the magnificent Grand Teton in the early morning light, you’ll notice a tall, broad-shouldered cowboy climbing into a dusty ranch truck.  That would be Nick Chance.  He doesn’t know it yet, but his world is about to be turned upside down.  And a brown-eyed beauty from back east will try to help him put it together again.

I’m been a long time fan of the works of Vicki Lewis Thompson.  What she writes is funny, sensual and just a good all around read!  As you all know, books in series are a favorite of mine.  When I got Wanted as a free eBook from eHarlequin, I quickly read it because of who the author is.  Sit back and let me tell you about the opening book to the “Sons of Chance” series.

The Last Chance Ranch was won in a card game by Archie Chance in 1937.  Although it was pretty rundown, Archie, his friend Seth and Seth’s sister Eleanor (who would become Archie’s wife) settled on the property.  They rebuilt the buildings and made it into a cattle ranch.

Nick, Gabe and Jack are brothers.  When their father passed away, he left the ownership of the Last Chance Ranch to the three of them and their mother, Sarah.  Although they all have equal ownership in the ranch, Jack runs the show.  He’s a slavedriver, and Nick can’t understand why he, with his fledgling vet business finds himself out in the fields digging post holes.  He’s frustrated beyond belief until looks up to see a woman pointing her camera at him.  Dominique Jeffries needed to get away after being passed over by her ex.  She decided to go to the Wild West.  She heard that Wyoming was one of the last places that you could find real cowboys and she wanted to be spontaneous.  Well, she found herself a real cowboy, and what a fine specimen he was!!

Nick and Dominique prove to be an interesting couple.  Nick is determined to be a vet but is constantly frustrated by Jack’s demands on his time.  Dominique is relationship shy after her previous relationship, and not prepared to stay in “the Wild West” but determined to go back to Chicago where her “real life” is as a portrait photographer.  She seems to be pulled to stay in the west where he wildlife/scenery photography calls to her.

I love the way Ms Thompson creates characters.  They aren’t perfect, but they are colorful and they interact in complex and intriguing ways!  The story of Nick and Dominique are a perfect example of incredible character creation and development.  The storyline that goes along with the characters is also well written.  Yes, this is a romance, and a steamy one at that, but the story takes some twists and turns before it comes to a surprise ending.

Stay tuned for the next book in this series.  I wonder which one of the Chance boys falls next 🙂

(74151)
$34.99 (as of July 6, 2022 10:43 GMT -07:00 - More infoProduct prices and availability are accurate as of the date/time indicated and are subject to change. Any price and availability information displayed on [relevant Amazon Site(s), as applicable] at the time of purchase will apply to the purchase of this product.)