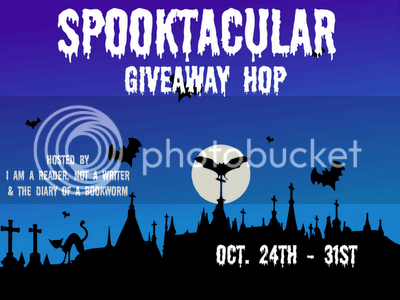 And welcome  to the Spooktacular Giveaway Hop!

Today we are joining with friends at I Am A Reader, Not a Writer and The Diary of a Bookworm to giveaway some awesome books.  If you read further down, you’ll be able to see my reviews for Never Miss A Chance and Never a Mistress, no Longer a Maid. If you come back tomorrow, we’ll have an interview with Maureen Driscoll, the author. Many of you who read this blog will realize that I am a huge Regency romance fan.  I read alot of great books.  I had never read anything by this author before, and she found me through a PUBIT event run by Barnes & Noble this summer.  I was totally blown away by these books.  I really don’t believe in giving reviews a letter or number grade as I like the words to speak for the quality of the book, not just a grade.  If I had to grade these books, I’d give them a 6 out of 5 🙂  Any fan of Regency really should read these books and discover this author…..and then wait anxiously for her next release, like I am.

So, the books that are being given away are:

Blurb: Caught behind enemy lines at the Battle of Waterloo, nurse Jane Wetherby is forced to seek shelter with British operative Lord Edward Kellington. After a night of passion, the two are separated. With nothing but the alias Jane used to protect her family, Lord Edward is unable to find the woman he can’t forget.

Seven years later, Jane courts scandal by serving as the unofficial surgeon in the village of Marston Vale. When Edward arrives to formalize his betrothal to a viscount’s daughter in accordance with his late father’s wishes, Jane has no choice but to watch the match proceed. When a threat from the past emerges, Jane must join forces with Edward to safeguard her loved ones. But at what risk to her heart…

Marcus Redmond, the Marquess of Riverton, has been in love with his best friend’s sister for years. When Lizzie’s reputation is damaged, he offers her marriage, hoping she will come to care for him eventually. But can the upright, staid Riverton make a love match with the impulsive, passionate Lizzie – especially when there are those who are determined to come between them?

Don’t they sound wonderful?  Anyway, onto the contest.  This contest is international as these two books are e-books – no postage involved!  You must be a follower of this blog to enter.  If you follow me on Facebook you get 2 extra entries and if you follow me on Twitter you get 2 extra entries.  Just fill out the form below and then head off to enter some or all of the 400 odd blogs that have entered this hop!  Have fun!

Previous Post: « Should’ve Been a Cowboy by Vicki Lewis Thompson
Next Post: Never a Mistress, No Longer a Maid and Never Miss a Chance by Maureen Driscoll »