Welcome to Sugarbeat’s books – The Home of the Romance Novel!

Today we are welcoming John A. Heldt to the blog! He has a new release to talk about, The Mine.  He’s here to share about his book as well as himself!

Barb – Tell us a bit about yourself and your writing.

John – I am an Oregon native and married father of three who has worked as a reference librarian for the past dozen years. But I come to novel writing as a former newspaper reporter and editor and it is reflected is my work. I favor short, declarative sentences — what some call the Hemingway style — and describing characters and settings in considerable detail. As a journalist, I often relied on photos and graphics to tell a story. As a novelist, I have to tell a story with words alone.

Barb – What is your favorite part of writing?

John – Getting it right. Finding the right words for the right situation. Producing something that reads more like poetry than an instruction manual. Reading a passage days, even weeks, after first putting it on paper and knowing that it can’t be improved.

Barb – What part of writing do you find the most challenging?

John – Finding new and creative ways to depict characters, places, even concepts. Good writers try to mix it up and use different words and phrases to describe the same things. They make heavy use of thesauri and steer clear of cliches. But there are times when the right words don’t come. Times when you have to sacrifice elegance to communicate effectively.

Barb – Tell us a bit about your new book – THE MINE.

John – It is a novel with something for everyone: humor, history, adventure, romance, drama, and serious themes. It is the story of Joel Smith, a cavalier college senior who road trips to Yellowstone in May 2000, enters an abandoned mine on a lark, and emerges from the shaft in May 1941. With little but his wits to guide his way, he returns to his hometown of Seattle and starts a new life among a tight circle of friends that includes his progressive 21-year-old grandmother and a beautiful, recently-engaged honors student named Grace Vandenberg. Joel possesses encyclopedic knowledge of the past, and he struggles with how to apply it. He knows Pearl Harbor will affect some of his friends in tragic, irrevocable ways. But he knows he is an interloper in another time and vows to limit his impact on the fate of others, a goal that becomes problematic when he falls in love with Grace. THE MINE is a book that entertains, but it is also one that prompts readers to think and ask the big questions.

Barb – What challenges did you face bringing this book to market, if any.

John – I faced few challenges bringing THE MINE to market as an ebook. The challenges have come in marketing the book to a mass audience in an industry still dominated by the print press and traditional publishers. Thankfully, that is changing.

Barb – Do you have a favorite character in The Mine?

John – Probably Grace. It was easy to identify with Joel, but Grace was the most fun to draw. She is a walking contradiction: strong but vulnerable, extraordinarily beautiful but humble, and someone who’s lived a sheltered life but is not afraid to take chances and defy the norms.

Barb – When you write, do you start with an outline, or do you let the characters take the story away?!

John – The former. I sketched out THE MINE in considerable detail before I started writing and stuck with the basic outline to the end. After I finished the first draft, however, I expanded on chapters and scenes where necessary.

Barb – What is your favorite all time book – or is there more than one?

John – If I had to pick one it would be “The Pillars of the Earth” by Ken Follett. But I also enjoy books by Vince Flynn and Nelson DeMille, among others.

Barb – Where can your fans keep in touch with you?

John – I have an author page at Goodreads (http://www.goodreads.com/author/show/5754231.John_A_Heldt) and a personal blog at: http://johnheldt.blogspot.com/

Barb – What project do you have in the works?

John – I am working on a second time-travel romance. This one will feature a middle-aged widow who returns to the time and place of her senior year in high school. It should be out by March 1.

Barb – Do you have anything else you’d like to add?

John – Yes. I encourage people to check out THE MINE not only because it’s an old-fashioned love story that has drawn raves from romance readers, but also because it’s a great story, period. They can learn more about the book at Amazon.com: 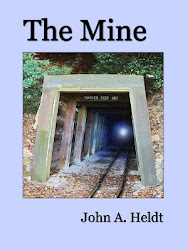 In 2000, Joel Smith is a cocky, adventurous young man who sees the world as his playground. But when the college senior, days from graduation, enters an abandoned Montana mine, he discovers the price of reckless curiosity. He emerges in May 1941 with a cell phone he can’t use, money he can’t spend, and little but his wits to guide his way. Stuck in the age of Whirlaway, swing dancing, and a peacetime draft, Joel begins a new life as the nation drifts toward war. With the help of his 21-year-old trailblazing grandmother and her friends, he finds his place in a world he knew only from movies and books. But when an opportunity comes to return to the present, Joel must decide whether to leave his new love in the past or choose a course that will alter their lives forever. THE MINE follows a humbled man through a critical time in history as he adjusts to new surroundings and wrestles with the knowledge of things to come.

John A. Heldt is a reference librarian who lives and works in Montana. The former award-winning sportswriter and newspaper editor has loved reading and writing since writing book reports on baseball heroes in grade school. A graduate of both the University of Oregon and University of Iowa, he is an avid fisherman, sports fan, home brewer, and reader of thrillers and historical fiction. THE MINE is his first novel.