Today we are welcoming Marie Astor to the blog!  She is touring her book, To Catch a Bad Guy, around the blogs with the help of Goddessfish Promotions and she’s here to share some information and also to give away some necklaces to some commenters.

Marie will be giving away five prizes of custom made jewelry to randomly drawn commenters during the tour (Continental US only):

For a list of more places to leave comments and increase your chance of winning, click HERE.

To Catch a Bad Guy 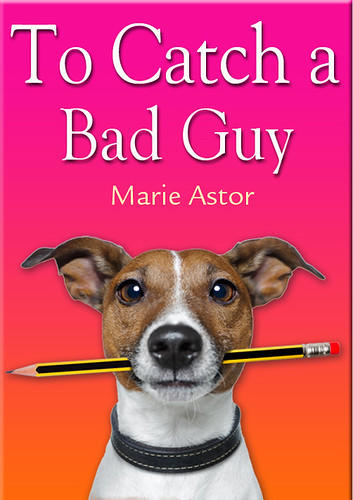 Janet Maple is convinced that her life could not get any worse: her stellar career at the DA’s office ended with a lay off and her boyfriend of five years told her that he wants to be just friends. When she lands a job at one of New York’s premier boutique investment firms, Janet begins to hope that her luck is finally turning for the better. Not only is she happy with her new paycheck, but things also seem to be looking up on the personal front, as the company’s handsome attorney expresses keen interest in Janet. However, her euphoria is short-lived, as Janet soon discovers alarming facts about her new employer’s business tactics. When her boss dismisses her suspicions as groundless, Janet finds herself confiding to a cute IT engineer, Dean Snider. The closer she gets to Dean, the more Janet is tempted to break her rule of not dating co-workers, but what she doesn’t realize is that everything she knows about Dean, including his occupation and even his name, is a lie.

Dennis Walker is a top-notch white collar crime investigator who will stop at nothing to put culprits away. When an opportunity for an undercover assignment at one of New York’s premier boutique broker dealers comes up, Dennis jumps at the chance, adopting a persona of geeky IT engineer, Dean Snider. While he may be an ace at his job, years of experience fail him when Dennis meets Janet Maple and finds himself torn between his professional obligations and his personal desires. Will he have to choose between his feelings and duty, or will he find a way to satisfy both?

“So, you’re ready for lunch?” Lisa winked. “I must say you’re looking very dapper in this suit of yours.”

“Thanks.” Janet blushed, aware that her boxy brown suit was nowhere near as elegant as Lisa’s. But, on a positive note, with her salary bump at Bostoff Securities, she would finally be able to move past the one hundred dollar suit racks she’d made a habit of frequenting at J.C. Penney.

“You might want to let your hair down, though.”

“What’s wrong with my hair?” Janet clasped her French twist protectively. She had spent nearly forty minutes this morning putting up her hair.

“Oh, it’s perfectly fine if you’re going for that tough prosecutor look, but if you’re looking to get a guy interested…” Her hand reached for Janet’s hair. Lisa’s four-inch heels made them almost equal in height.

“I wasn’t aware I was being set up on a date.” Janet lips knitted into a prim line – a lifelong involuntary reaction to irritation. Sure, Lisa was the boss, but that did not give her the right to control her employees’ looks and personal lives.

“Oh, come off it.” With a swoop of her hand, Lisa plucked a handful of pins from Janet’s hair, undoing her tightly knotted French twist. “There.” Lisa stood back and eyed Janet appraisingly. “Much better.”

Janet ran her hand over her hair. It was full of kinky waves from being wound up in a twist.

“Do you mind telling me what’s going on?” Janet struggled to keep her voice level for the sake of job security.

“I got you a date, you silly! Well, it’s not exactly a date…” Lisa retracted.

Janet made a mental effort to shut her mouth, as her jaw was having a hard time taking this much obnoxiousness without dropping.

“Calm down, will ya?” Lisa continued. “It’s a business lunch: we’re meeting Tom Wyman at Aquavit. Tom is a really nice guy, and he’s not too shabby in the bringing home the bacon department either, if you know what I mean. He’s a partner at Ridley Simpson.” Lisa winked.

“Look, Lisa, I really appreciate your thinking of me, but I’m not looking to date anyone at the moment. I just got out of a relationship, and I want to take it easy for a while…”

“Please. It’s me you’re talking to – your best friend since forever.”

And now my boss. Janet forced a smile.

Marie Astor is the author of contemporary romance novels Lucky Charm, On the Rim of Love, This Tangled Thing Called Love, romantic suspense novel, To Catch a Bad Guy, and a short story collection, A Dress in a Window.

If you would like to find out more about Marie’s books, please visit

On the Rim of Love: http://www.amazon.com/On-Rim-Love-Contemporary-ebook/dp/B005TOWI7K/ref=pd_sim_kstore_3