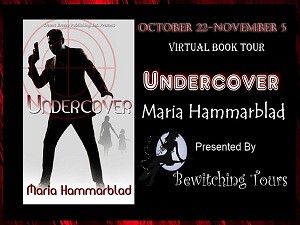 Today we are welcoming Maria Hammarblad to the blog! She is here to talk about her writing and her latest book, Undercover!  If this sounds like the sort of book that you would be interested in reading, please use the buy links at the bottom of the post to pick up a copy!

Barb – Tell us about your new release?

Maria – My new novel Undercover is about a rather normal girl, Jenny, who gets in way over her head when she falls in love with a handsome foreigner. He’s a Russian agent. Settling down with Jenny seems like heaven on Earth to him, but it’s not going to be that easy.

Barb – When did you decide to become a writer?

Maria – I’ve always wanted to be a writer. I wanted to make books long before I could read or write. I’m Swedish originally and didn’t expect to write in English, but by now I’ve written so much in English I don’t think I could do it in Swedish anymore. It’s funny how life turns out! J

Barb – Do you keep track or write reviews for books you read?

Maria – Except for the very rare case when I can’t find anything good to say about a book, I write reviews. Especially when I read books from self published or small press authors; reviews and ratings are so important in this business. I don’t write a review if I can’t say the book is at least okay – I’d rather be silent than mean – and sometimes I get caught up in everyday life and forget, but I try to do it.

Maria – Yes, I do. I work as project manager at Pet Doors USA. Working with pet products is a good fit for me; I love animals, and if I have to work besides writing, I could hardly end up in a more suitable company. I’m also enrolled full time at University of South Florida, aiming for a Bachelor’s Degree in business management. My days are pretty full.

Barb – What part of the writing process do you love? What part do you hate?

Maria – When I’m really into a project, the characters take on a life of their own in my head. I love that, because anything can happen. From time to time, they don’t like each other even if they’re supposed to. Sometimes they wake me up in the middle of the night and demand I write their story down.

What part I hate… I hate not having time to write, hahaha. Seriously, I’m not particularly fond of editing; once I’m done writing, the story is out of my system and I don’t want to revisit it for at least a year or so.

Maria – I always have trouble with names and titles. Many of the characters will have eloquent names such as X and Y through most of the book, until I HAVE to name them. When the book is done and I really need to call it something, I grab a big sheet of paper and brainstorm. I write down what it’s about, key words, look for synonyms, and so on. For me, the title is the most difficult part.

Maria – Inspiration comes from the strangest things at the most unexpected times. I see something, either in real life or on TV, and my mind starts playing a “What if” game. It goes along the lines of: Hey, that’s a really loud motorcycle. Hmm, what if that guy would spot a girl in a car, and follow her, and what if he’s in a criminal gang. No, wait, he’s not really a criminal, not this time. He’s an undercover cop. They’ll discover him, and he’ll disappear, and the girl has to rescue him.

Barb – Which genres do you prefer to read?

Maria – I read almost everything, but on top of the list are science fiction, fantasy, and horror.

Barb – Are there any new authors that have grasped your interest?

Maria – Absolutely, there are so many talented people out there. Some of my favorites are Christy Elkins, Chris J. Randolph, Tiffinie Helmer, and Stephanie Burkhart. Four very talented people to put on a TBR list.

Maria – I prefer Facebook, because Twitter moves so quickly I lose track of things. I see a tweet I want to respond to, get distracted by something else I want to do, and then I never find it again. I like Facebook because you can express yourself in more than 140 characters, and the pace is more suited to my old brain, hahaha. Hit me up on either though – I love to hear from people.

Maria – Yes, I have Googled myself. The epitome of narcissism… Seriously, it’s interesting to see what other people might find if they search for me, and how many of the top results are from my website, blog, etc.

Maria – I have a lot going on right now. There’ll be a short free read available around Christmas, called Courage and Retribution. It is a prequel to my novel Kidnapped, and I think people who enjoyed the novel will like this one too. I also have three books scheduled for release in 2013. It will be one contemporary suspense/romance, and two science fiction stories. Hmm, 2013 is just around the corner, I’d better get working! 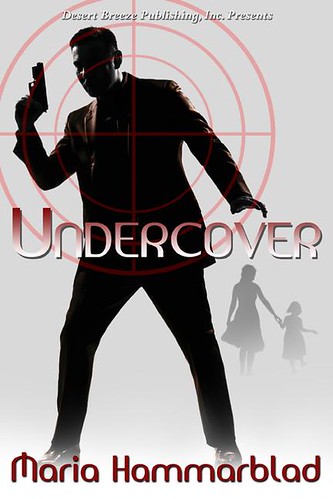 When Jenny Moore meets Alexei Roshenko, it’s love at first sight. The tall, dark and handsome stranger appears to be the answer to every romantic fantasy any woman ever had. There is however more to him than meets the eye, and a dark and violent past is catching up with him. When Jenny decides to follow him back to Russia, she gets entangled in a web of deceit and secrets beyond her wildest imagination.

When the wheels finally touched American soil, Jenny was both relieved and nervous. She was so happy to be home she could cry, at the same time as she fretted over his papers. They looked good but could hardly be real. Alex didn’t seem worried at all; he was the epitome of calm as they stood in the long line to the passport checkpoint.

Her own passport had been unused before this trip, and she opened it to look at the stamps. Alex bent over to kiss her on the cheek. He knew her well enough already to know what was on her mind. “Don’t worry, I do this all the time.”

The comment distracted her, and she thought he probably did it on purpose. She wanted to ask a million or so questions, but didn’t even lift an eyebrow. “I can’t wait to be home.”

Once they reached the counter, the woman sitting there hardly even looked at the photos. She threw one glance at their documents, gave them back, and yelled, “Next!”

They waited for the luggage for an eternity, and Jenny was nervous all the way through customs. She relaxed a little once they were well into the large airport, surrounded by Americans hurrying in all directions. The protection of being in the country was more imagined than real, but she was still happier. They walked slowly hand in hand with the suitcases rolling behind them like obedient dogs, and just seeing the crowds made her heart lighter.

She wondered if her lover would miss seeing and hearing his own language, and if he would miss his own people. He was stranded in a foreign country and culture with nothing but her, with an axe hovering over his head, and all this after knowing her for just a couple of months. Thinking about it made her feel incredibly guilty, and telling herself she couldn’t have done anything about it didn’t help at all.

Eventually, Alex stopped and pulled their bags up next to a wall. “Are you up for the drive home, or do you want to stay in a hotel tonight?”

She kept going because he did, but now when he said it, she was very tired. “I don’t know. It would be good to be home, but it seems so far away. What do you think?”

“Oh, I want to go somewhere and take all your clothes off, but what I want is not important. Your wish is my command, my sweet.”

When they walked towards the exit, past one of the cafés, she saw a familiar face turn towards them. A smile played on the man’s lips. She had seen him not all that long ago, on the other side of the world, in Alex’s apartment. He met her eyes, and she said, “Ignore him.”

They walked right past the old man. “They’ve been with us all the way. One would think people would have something better to do.”

She hadn’t seen anyone else, but if he said they had been there, they were there. 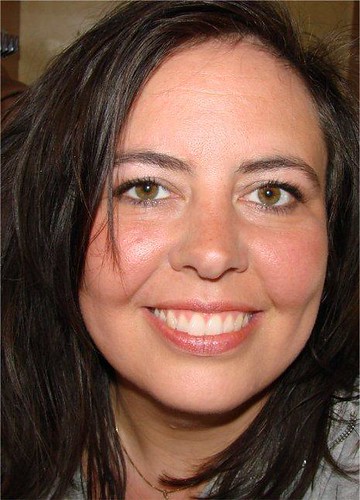 Born in Sweden in the early 1970’s, Maria showed a large interest for books at an early age. Even before she was able to read or write, she made her mom staple papers together into booklets she filled with drawings of suns and planets. She proudly declared them, “The Sun Book.” They were all about the sun. She also claimed, to her mother’s horror, that her being on Earth was a big mistake and that her alien family would come and bring her home at any moment. This never happened, but both the interest in space and the passion for bookmaking stayed with her.

As an adult Maria’s creativity got an outlet through playing bass in a number of rock bands, and through writing technical manuals and making web pages for various companies and organizations. She did write drafts for a few novels, but the storytelling muse was mostly satisfied through role playing online on Myspace. It was here, while writing stories together with people from around the globe, she stumbled onto Mike. They started talking out of character, and she moved over to Florida to him late 2008. Today the two are married and live in the Tampa Bay area with three rescue dogs.

Flashback, to be released by Desert Breeze Publishing June 2013

Operation Earth, to be released by Desert Breeze Publishing August 2013

Borealis XII, to be released by Desert Breeze Publishing November 2013

Find Maria on the web:

Undercover is found at: