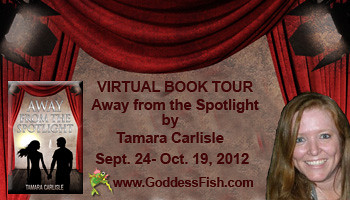 Today we are welcoming Tamara Carlisle to the blog! She is touring her book with the help of Goddessfish Promotions.  She is giving away two $25.00 Amazon Gift Cards to randomly drawn commenters from this tour.  If you are interested in increasing your chances of winning, check out the list of other blogs involved in this tour HERE.

Barb – Try to describe your book in one sentence.

Tamara – A law student and a famous actor engage in a whirlwind romance, trying to have a normal relationship despite the problems associated with his career and the temptations of others.

Tamara – If I could live anywhere in the world, I would live in L.A. again.  I miss my friends who live there and all my favorite places, several of which I detailed in Away from the Spotlight:  (1) The Royalist is based upon the Ye Olde King’s Head Pub in Santa Monica; (2) Callaghan’s Pub is based upon O’Brien’s in Santa Monica; (3) I referenced my favorite spicy peanut noodles from Chin Chin (although I frequented the restaurant on Beverly rather than the Brentwood location mentioned in the novel); (4) I also referenced, but did not name, the Mexican restaurant, El Cholo’s, which truly does have the best margaritas in town; and (5) I used my beloved alma mater, the University of Southern California, as Shannon Sutherland’s law school.

I was in L.A. a few weeks ago for the USC-Cal game and I had dinner at El Cholo’s, lunch at Chin Chin, and bought some British food for my husband at the shop attached to the Ye Olde King’s Head Pub.  I really do love those places!

Barb – Who are your cheerleaders?

Tamara – My cheerleaders are my mom, sister, niece, and a number of my friends who all read Away from the Spotlight, or excerpts thereof, before I ever had any intention of publishing it.  They all told me I was crazy not to do so.

Barb – Do you listen to music while writing?

Tamara – For someone who is as fanatical about music as I am, I cannot listen to music while I write.  I cannot write with any distractions.  I prefer very loud, alternative rock – with music on, I would be singing and, quite possibly, dancing.  It doesn’t make for a very productive writing session.

Barb – Which scenes were the hardest to write?

Tamara – The hardest part to write was the ending.  Originally, I had written it as an epilogue and it was very brief.  I realized that I had to flesh it out a little more to ensure a satisfying ending.  It made me cry and I am not one to cry as a general rule.

Tamara – I had always called my novel, Spotlight.  That word was fitting since hero, Will MacKenzie, is an actor.  It was only when I decided to publish that I expanded the title to Away from the Spotlight to differentiate it from other novels with similar titles.  The expanded title is even more fitting since the novel details Will’s struggle to maintain a normal and private life away from his public persona.

Barb – How did you come up with your premise for your book?

Tamara – Around the time that the Twilight movie was released and for quite a while afterward, I couldn’t open my internet browser without seeing, front and center, some story about one of the actors or actresses in that movie.  Every detail of their lives, real or rumored, was published.  I wondered how they would date and ever know whether that person liked them or the perks and publicity of being associated with them.  I thought that they would have to date someone who knew them before they were famous or someone who didn’t know who they were.  However, considering how much press they were getting, who wouldn’t know who they were?  The answer then occurred to me:  a law student.

A law student has little free time in light of the vast amounts of reading required and working part-time as a law clerk reduces that free time even further.  Based upon my experience, the last thing a law student wants to do in his or her limited free time is read or engage in any other sedentary activity such as watching television or going to the movies.  Consequently, a law student might not be knowledgeable about relatively new actors and actresses.

With all that in mind, the idea for the novel came to me:  a very famous, young actor meets a law student who doesn’t know who he is.  I couldn’t get the idea out of my head and finally decided to write it down.  Away from the Spotlight was born.

Barb – Do you have an all time favorite book?

Tamara – My all-time favorite book is The Eagle Has Landed by Jack Higgins.  I love that Higgins turns a World War II spy thriller on its head, making the bad guy sympathetic and the good guys flawed and not always so good.  I referenced this book in Away from the Spotlight as follows:

“Pam has this fantasy of meeting someone like a character in her favorite book.  It’s a World War II Spy Thriller and the bad guy, who’s really not a bad guy, just on the wrong side, is a tall, blond Prussian-type.  She’s hoping to meet someone like him while we’re in Germany.  Tonight is her last chance.”

Barb – Where can your fans find you?

Tamara – I would love to hear from readers.  Please feel free to contact me or find more information at the following sites:

Away from the Spotlight is available in e-book format at:

Barb – What are your thoughts on e-books? (i.e. love them, hate them, wave of the future)

Tamara – I love collecting hardcover editions of books by my favorite authors, and visiting musty used book stores to find first editions of older books.  I spent a small fortune at Acres of Books in Long Beach, California, before it closed.

After purchasing an iPad and, subsequently, a Kindle Fire, I started to read e-books.  I became an even more prolific reader because I could read a book at will without having to make a trip to the bookstore or waiting for delivery from an online retailer, and I didn’t have to worry where I would put the book when I was finished (my bookshelves are overflowing).  I also like the search function that allows me to use key terms to easily reread favorite passages, or find later passages if I’m impatient for certain answers.

While I will miss the joy of searching for hardcover books, I love e-books.  Away from the Spotlight is available only as an e-book right now.

Tamara – If I have five novels in various stages of development:  a paranormal romance that takes place on a college campus, two contemporary romances involving musicians, a historical romance set in 16th century Scotland, and a contemporary romance involving the relationship between two people in disintegrating marriages with alcoholic spouses who meet when one of them is on vacation in Scotland (it’s not as depressing as it sounds). 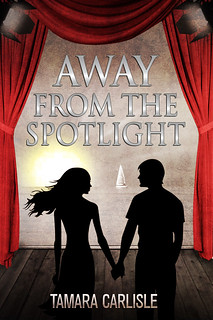 In the closing weeks of law school, Shannon Sutherland meets handsome and charming Englishman Will MacKenzie. Initially swept off her feet, Shannon finds that Will has a secret that, once discovered and the consequences realized, could destroy their fledgling relationship. Will and Shannon take great pains to have a normal relationship but, ultimately, find it impossible to do so. Will the pressures of their careers and the temptations of others drive Will and Shannon apart? Can Will and Shannon live a happy life away from the spotlight?

“That would be different for you.”

She wasn’t wrong.  I had very casually dated a number of men I had met in the various pubs in Santa Monica.  They were from all over Europe, but not one of them had been English for some reason.  There were Scottish, Irish and Welsh men among them, but never English.  I had commented on occasion on the fact that I never seemed to meet English men at the English pubs I frequented.

“Drop-dead gorgeous, smart, funny and with excellent taste in music.  Just my type.  Well, better than my type, actually.  It’s hard to believe someone that perfect has any interest in me.”

“Please” Rachael said.  “You get hit on every time we go out.”

“That’s overstating things quite a bit.”

“You seem oblivious to it half the time.”

I guess I did ignore some of it.  When you spend time as part of a female minority in bars full of drunk men, it was hard not to think that some of them would have hit on me for no other reason than that I was female, regardless of how I acted, what I said, or what I looked like.  I therefore learned that getting hit on wasn’t necessarily a compliment and, the later it happened in the evening, the less of a compliment it was. 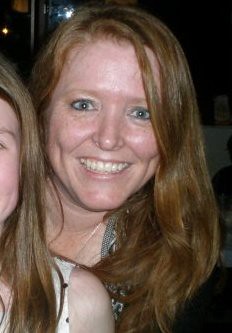 Tamara Carlisle is a former attorney and business consultant.  Away from the Spotlight is her first published work of fiction.  She currently is working on two additional novels:  one is about love in the music industry and the other is a work of paranormal fiction.  Tamara currently resides in the San Francisco Bay Area with her British husband and daughter.

For further information, go to http://www.tamaracarlisle.com.

Tamara’s Goodreads Author Page also includes a blog detailing trivia relating to Away from the Spotlight.

Previous Post: « Interview with B.J. Daniels, author of Justice At Cardwell Ranch
Next Post: Book Feature with Kate Moretti, author of Thought I Knew You »