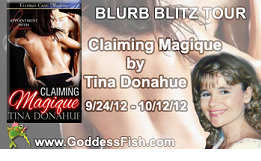 Today we are welcoming Tina Donahue to the blog!  She is the author of Claiming Magique and is currently touring this book with the help of Goddessfish Promotions.  Tina is giving away a copy of one of her back list books to a lucky commenter.  To increase your chances of winning, follow the tour HERE and leave a comment on each blog! 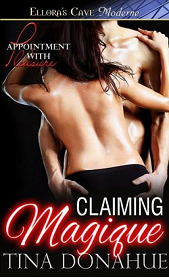 A man at the center of power. A woman who won’t be ruled. They call her Magique.

Sought out by the District’s elite, she’s no ordinary call girl, deciding who will pleasure her for the evening. Her preference is for several men at once. Games of bondage and submission heighten her arousal and desire to have a strong male take her.

Hunter is only looking for a good time, not a woman who unleashes a hunger so deep it changes his world. He won’t stop until Magique is his alone, a prisoner of his lust, powerless against his growing need for her body and heart.

With this man, resistance isn’t allowed. For this woman, he’ll create a world of sensual delight and yearning like none she’s ever known.

Hunt waited, counting the seconds. When he’d reached three minutes, she made her move as he sensed she would, leaving her table, heading into the restaurant.

He followed, tailing her to the restrooms all the way in the back. His server gave Hunt an ‘all clear’ nod. With nothing to stop him, Hunt placed his hand on her before she could open the door to the ladies’ lounge.

She didn’t flinch or utter a cry of surprise. She’d expected him to do this.

If ever there’d been a moment in his life when he’d wanted to sigh, it was now. Her scent surrounded him. Its intoxicating fragrance coupled with her musk made him forget everything except having her. Hunt edged closer, his chest touching her back.

She didn’t move away. He hadn’t figured she would.

Leaning down, he whispered, “You’ve been following me.”

She turned as well as she could given their proximity, her face a mask of feigned outrage. “What?”

“You heard me. What I want to know is why? We don’t need to play games. I want you and I know you want me.”

Before she could contradict him, Hunt captured her mouth, slipping his tongue inside.

She sagged against him. All fight forgotten.

He couldn’t have planned for this moment to be as good. Turning her to face him, Hunt held her as he’d wanted to for days, kissing away any future protests that might surface. She tasted better than he recalled, fresh and minty, hot and willing. She drove her fingers through his hair, keeping him to her.

He wasn’t about to leave her again.

Tina can be found: