Lady Louisa’s Christmas Knight by Grace Burrowes
ISBN: 978-1-4022-68632
Release: October 2012
Publisher: Sourcebooks Casablanca
Source: I received a copy of this book to read and review from the publisher 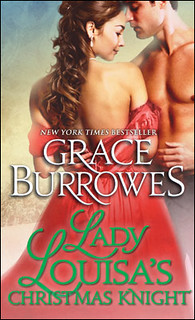 ‘Tis the Season for Scandal…
Years ago Lady Louisa Windham acted rashly on a dare from her brother, and that indiscretion is about to come to light. She knows her reputation will never survive exposure. Just as she’s nearly overwhelmed by her dilemma, Sir Joseph Carrington offers himself to her as a solution…
But Sir Joseph has secrets as well, and as he and Louisa become entangled with each other, their deceptions begin to close in on them both…

Welcome to Book 6 of the Windham series by Grace Burrowes!  For those of you who read along with my blog, you will know that this is a series that I have greatly enjoyed.  Each book has it’s special little part that makes it unique from the others.  In Lady Louisa’s Christmas Knight, we have the opportunity to meet Lady Louisa, one of the many siblings of the Windham clan.  She is about to “pay” for a youthful indiscretion and you are told in the blurb for this book.  I’m not going to tell you what the indiscretion is, as you are well into the book before you find out.  She, like her siblings is very bright, and has yet to find a man who will be her equal intellectually.  This, two is about to change.  She finds herself in the position of rescuing Sir Joseph from a group of marriage minded women and also in the position to get to know him a bit better.  Sir Joseph served his country honorably and is now that the war is over he is home, widower, father and land owner.  He sees it necessary to marry to provide a mother for his children, and settles on Lady Louisa a a potential wife.

Although I have included  a thoroughly delightful excerpt I found on Ms. Burrowes’ website, I hesitate to give away any real details of this story.  As I’ve said, each one of these stories is delightful in their own way, I think that this one show the Windham family as a functioning, interacting family.  Yes, the focus is Louisa, and Sir Joseph as the hero and heroine, but I think there is more interaction than in previous books.  In previous books I have been thoroughly delighted at the machinations of “His Grace” or Percival.  He’s a meddling old fool that loves trying to manipulate his children’s lives.  We get glimpses of the real mastermind behind him – his wife – “Her Grace”. In this book, we see much more of Her Grace and I find her to be as delightful as her husband.  I think in some respects, Their Graces almost overshadow the real story that is going on 🙂

If you haven’t been following this story, jump in and join the journey.  Each book so far can be read as a standalone including this one, but they do exist in a series and some “secrets” will be given away if you read them out of order.

Now, I hope you enjoy the opening passages of the first chapter of Lady Louisa’s Christmas Knight.  I hope that you pick up your own copy to read this delightful series!

Sir Joseph Carrington acquired two boon companions after doing his part to rout the Corsican. Carrington was accounted by no one to be a stupid man, and he understood the comfort of the flask—his first source of consolation—to be a dubious variety of friendship.

His second, more sanguine source of comfort, was the Lady Ophelia, whose acquaintance Carrington had made shortly after mustering out. She, of the kind eyes and patient silences, had provided him much wise counsel and companionship, and that she consistently had litters of at least ten piglets both spring and autumn could only endear her to him further.

“I don’t see why you should be the one moping.” Sir Joseph scratched the place behind Lady Opie’s left ear that made her go calm and quiet beneath his hand. “You may remain here in the country, leading poor Roland on the mating dance while I must away to London.”

Where Sir Joseph would be the one led on that same blighted dance. Thank God for the enthusiasm of the local hunt. Riding to hounds preserved a man from at least a few weeks of the collective lunacy that was Polite Society as the Yuletide holidays approached.

“I’ll be back by Christmas, and perhaps this year Father Christmas will leave me a wife to take my own little dears in hand.”

He took a nip of his flask—a small nip. Unless he spent hours in the saddle, or hours tramping the woods with his fowling piece, or a snowstorm was approaching, or a cold snap, his leg did not pain him too awfully much—usually.

“I honestly do not know how you manage it, my dear. Ten piglets, twice a year, for at least as long as I’ve had the pleasure of your acquaintance.”

She apparently hadn’t caught yet this season, though, and winter had arrived. This was worrisome on a level a man not yet drunk didn’t examine too closely. Ophelia’s fecundity provided reassurance of a fundamental rightness about life—reassurance far more substantial than that held by Sir Joseph’s flask.

“Get me some piglets, your ladyship.” He switched ears, and his friend tilted her heavy head into his hand. “Get me the kind of babies I can sell at market and grow rich on. Richer. For Christmas, a litter of twelve would do nicely.”

Her record was eleven, and every one of them had lived. That had been two years past, when Sir Joseph had been desperately in need of some kind of positive omen.

A groom whistling the aria “He Shall Feed His Flock” in the manner of a holiday jig let Sir Joseph know that his mount was ready. The lad would not intrude on a private audience between Sir Joseph and Lady Ophelia, not when the groom could abuse poor Handel without mercy instead.

With a final pat and a scratch, Sir Joseph left his porcine friend to join his neighbors.

Hunt meets reminded Sir Joseph of the army on parade: All the finery was visually impressive and the great good cheer and bonhomie on both occasions fueled in part by nerves and liquor. The agenda of the day in both cases was ostensibly virtuous, and yet, if all went according to plan, somebody not of the assemblage would die a bloody death.

That the somebody was a fox—mere vermin—and outnumbered by the hounds often thirty-couple to one never seemed to bother anyone but Sir Joseph. Even amid the great good cheer of a December hunt meet, he knew better than to share his sympathies for the animal with another human soul.