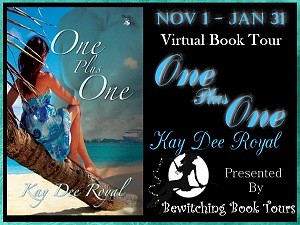 Today we are going to be talking about Kay Dee Royal’s latest book, One Plus One.  I’ve had the opportunity to read it and loved it!  So, let’s talk about this book. 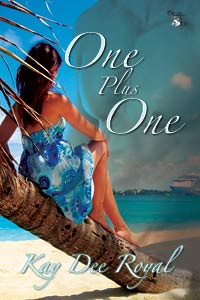 One Plus One Blurb:

Coerced by her friend, Lacinda, a woman crushed by love, winds up on a three-week singles cruise.

Blade, a man of means, discovers Miss Right under the guise of a singles cruise set up by his business partner.

Once Blade focuses his efforts he always gets what he’s after, until Lacinda throws his arrogant reputation back in his face.

Can Blade break through Lacinda’s angry barriers? Will she ever see him as anything more than a player?

One Plus One is a great hot little read!  Lacinda has been tricked to go on a singles cruise by her friend Avery.  This isn’t just a single’s cruise, but a singles cruise with benefits!  Although she’s nervous, Lacinda is determined to enjoy herself to the best of her ability.  Between the chauffeur/steward Travis, and the unknown man from the pool deck, her first few hours on the cruise are stimulating and certainly different than anything that she has experienced before!

Blade has always been wanted for his money or his position.  He just wants to be wanted for himself. This cruise is his chance to be someone other than himself.  Meeting Lacinda in real life is better than he anticipated! Their first contact is off the charts hot, but he wonders if she will just want him for himself.

This is a wonderfully written short story.  The characters have chemistry that melts the pages and as a result, the sex is hotter than hot.  The characters are well developed, and the storyline is great!  This short little story grabs the reader, draws them in and then finally releases them at the end!  Great read! Pick up a copy for yourself!

One Plus One Excerpt  ~

“Lacinda Gainesly,” a steward called her name. She saw the sign he held with her name printed in bright purple. She slipped on the first step leading down onto the ship and stumbled past the steward. The sign dropped from his fingers and his arms latched around her body from behind. His quick reflexes saved her face from biting the deck, but his hands cupped both of her breasts and squeezed. Lacinda threw her elbow back into his side.

“Hey, a little respect for the guy who saved your life.”

Lacinda shrugged out of his grasp. She met his gaze and realized this was the same man who picked her up from her hotel in a long black limo, only then he was dressed in black instead of the white uniform he now wore.

“I’m a lot of things, like possibly a hero.” His eyes looked as happy as his lips.

She noticed his smile, the same he shared earlier when he asked her questions about why she took the cruise quiz. Lacinda thought he was simply a driver for the cruise company so she shared some of her story. He knew about Alex dying in a car crash on the way to their wedding. She searched her memory for anything else she might have shared which could embarrass her later.

“Alas fair maiden, your chambers await your timely arrival,” he said, faking a British accent. He held his gloved hand out. Lacinda refused it.

“I’m ready for my quarters.” She needed relaxation, maybe take a nice hot scented bath and get prepared for the swing of things, anything to distract her from the past that never left her alone.

“As you wish, my lady,” he said, again with a British accent. The steward turned, led her across the deck, and down a stairway. She saw men and women following other stewards or each other. Once on board everyone began mingling, even flirting, judging by the tinkling female laughter and deep manly chuckles.

“There will be an announcement left under your door regarding tonight’s dinner seating arrangements. May you enjoy your day and make sure you take time for a relaxing massage. There’s always a masseuse available. Their extension is listed beside your phone. You’ll find your room key there as well.”

Lacinda followed him down a narrow hallway until he stopped in front of a door with an elegantly scrolled number 216.

“This is you. May I answer any questions before I go?”

Lacinda dug in her purse for a tip. Clueless on how much was appropriate and not wanting to give him anything. He got his gratuity when he copped a feel of her breasts.

Kay Dee Royal writes paranormal and fantasy romance—maybe because it’s also her favorite genre to read! She pens tales with wild, rugged heroes and strong, intelligent heroines. She’ll give them both a few shadowy secrets, making her stories intriguing and fun. She resides in Southern Michigan with her family (her dogs, her cats, her caged husband… you get the idea). You can reach her at her blog and find the latest on her titles from her publisher, MuseItHot.

One Plus One is available:

(23205)
$104.99 (as of January 28, 2023 10:48 GMT -08:00 - More infoProduct prices and availability are accurate as of the date/time indicated and are subject to change. Any price and availability information displayed on [relevant Amazon Site(s), as applicable] at the time of purchase will apply to the purchase of this product.)

Previous Post: « A Bride for Two Roughnecks by Helena Ray
Next Post: Interview with Susan Mac Nicol, author of Cassandra by Starlight »