Welcome also to Steamy Saturdays! Saturdays are the days that we talk about a book that is on the steamier side of romance.  Today is one of the latest books I got in my Blaze subscription. I love the cover 🙂 I hope you enjoy my thoughts about this book.  It will be released in January 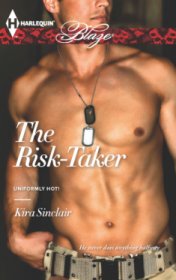 Subject: Totally buff ranger Gage Harper
Current Status: Walking wounded— both physically and mentally
Mission: Finally get the girl he could never have
Obstacle: She may just be the biggest risk he’s ever taken

All returned POW Gage Harper wants to do is forget, even if he has to let some gym rat beat him to a pulp to do it. He certainly doesn’t want to tell the tale of his heroism to the tabloids. Especially since he’s no hero…. But one journalist is determined to get the inside scoop–and she’s the only girl Gage has never been able to resist.

Hope Rawlings never took Gage’s romantic advances seriously growing up. After all, she was just his buddy, and a guy like Gage could have any girl he wanted. But now she needs his story to get her dream job in the city. And she’s willing to do anything to get it.

As I mentioned, this book was in my latest box of books from Harlequin. The cover grabbed me as I was looking through the books and I decided to read this one first. I loved this book!

In this story, Gage Harper has come home to his home town of Sweetheart after being rescued. He had been captured in Afghanistan and tortured.  He is now trying to figure out what to do next while being hounded by reporters in the surreal environment of Sweetheart in the week leading up to Valentine’s Day. Gage is back living with his parents and has run into the only woman he’s ever wanted, Hope Rawlings.

Hope spent all of her childhood as Gage’s buddy. She watched him have girlfriend after girlfriend and had no intention of being another notch added to his belt. When he enlisted in the army and then told her that he loved her, she pushed him away. After losing her mother, she had no intention of losing someone else that she loved, expecially a risk -taker like Gage. But now he’s back and she’s been offered her dream job in exchange for an interview with him.

Gage and Hope are excellent characters. They are both stubborn. Where Gage is always looking for something new to give him an adrenalin rush, Hope is the opposite, determined to have a safe and secure life. Although Hope has always loved Gage, she is determined to keep him at arm’s length. They know each other so well, and when they finally get together they shoot sparks off of one another. Their chemistry simply combustible.

It was refreshing to read a story about characters that have such hard won happily ever after!  I will be seeking out more by this author! Truly one of the best Blaze novels that I’ve read this year!

(11332)
$59.99 (as of July 6, 2022 10:43 GMT -07:00 - More infoProduct prices and availability are accurate as of the date/time indicated and are subject to change. Any price and availability information displayed on [relevant Amazon Site(s), as applicable] at the time of purchase will apply to the purchase of this product.)