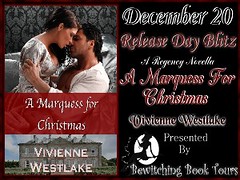 Today we are welcoming Vivienne Westlake to the blog.  She is the author of A Marquess for Christmas and is here to share some information about her book. If this sound like something that you are interested in reading, please find a buy link at the bottom of the post and pick up a copy!

A Marquess for Christmas
Vivienne Westlake 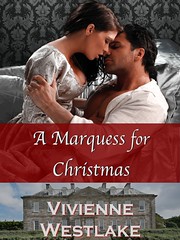 A proper widow. A rakish marquess. He rescued her from thieves, but will she be able to save him from himself?

When Violet Laurens is rescued from highwaymen, the furthest thing from her mind is that her heart might tumble next. She loves her independent life, no matter her lonely bed. The handsome stranger reawakens the passion she thought buried along with her husband, pushing her to new heights of desire. But she knows it’s only a matter of time before he remembers his name and leaves her.

The dissolute Marquess of Kittrick has vowed never to marry, causing a rift in his family that sets him on the road just in time to do battle with ruffians intent on stealing a lady’s coins—and more. Discovering the fiery wanton beneath the widow’s oh-so-proper demeanor makes him want nothing more than to forget who he is for just a bit longer. Maybe forever.

When Kit is forced to acknowledge who he is, will the truth trump their shared passion, and the love they can’t quite admit to? Or will Violet overcome her fear—and Kit his dissolute ways–and be able to lay claim to A Marquess for Christmas?

Vivienne Westlake has been reading and writing romance since the age of fifteen. She has a Bachelor’s Degree in English Literature and when she’s not plotting stories about sexy heroes and sassy heroines, she’s buying a book on British history, watching the latest teen vampire show, doing an art project or singing karaoke with friends. Vivienne is an active member of Romance Writers of America, Romance Divas, and Indie Romance Ink.

Vivian can be found:

A Marquess for Christmas can be purchased:

“He still sleeps fitfully, my lady.” Avery put his hand to the man’s head. “A little warm. We should get some ice and keep his temperature down.”

“And you have checked his bandages?” The bleeding had stopped, but the chance of infection was high. She stood by the four poster bed, looking down at her savior, who lay still and quiet, despite the people in the room.

“Yes, the wound is not healed, but neither is it as gruesome as it was yesterday.”

“And he has not awoken?”

“He tosses and murmurs and has managed the chamber pot a couple of times, but he does not speak and his eyes are glazed and unfocused.”

It had been two days since the incident. She prayed it was the laudanum keeping him so dazed and not his injury. But they could not be sure yet.

“If he does not awaken in the next day or two, we shall have to fetch Doctor Littleton. For now, let us keep him cool and make sure that someone checks on him every hour.”

Violet went to the window and opened it.  The sky was cloudy and the ground covered with a thin layer of snow. “The fresh, cool air should do him good.” She rang the bell then went back to the bed and sat down. The man’s hands felt hot under hers, but she raised them to her cheek to be sure. Definitely too warm.

“My lady?” Miriam entered the room.

“Go and fetch some ice please. If there’s no ice, send a footman outside and gather snow. We need to keep him cool until his fever breaks.”

She leaned over to the small bedside table,  dipped a cloth into a small ceramic basin, and wrung it out. “I will see to him for a while, Avery.” She looked up at him and smiled. “Thank you.”

Gently, she took the cloth and wiped the man’s face, always conscious of the bandage. She hummed as she worked. It was a very old song that she’d learned as a girl. Sometimes her mother would sing it as she stitched.

“Come live with me and be my love and we will all the pleasures prove. The hill and valley, dale and field, and all the craggy mountains yield.”

She washed his arms, noting each twist and turn of muscle. She even tested it with her finger to see if it was as firm as it appeared. Nothing about him was soft– except for his lips and the silky threads of his hair.

She brushed the towel over his neck and down to the exposed skin at the opening of his tunic. The hair there was thin and fine. She couldn’t help but stare as she swept over his chest. His nipples were wide, but tightened into little nubs when she touched them.

What would it feel like to run her palms over them? Would they react to her as they did to the damp cloth? What about her mouth?

Violet turned away and blushed. She closed her eyes and willed herself to remember him fighting off the thief and the moment when he’d taken the fateful blow. She needed to focus on her task and not on the yearnings she felt for a man she barely knew.

She might be fantasizing about a man of base morals or a man with a wife and four children. Or, what if he was a clergyman? That she doubted considering his skill with weapons and his readiness to fight, but what gentleman would watch an innocent woman get attacked by thieves and not come to her rescue?

A man does what needs must. Even a man of the cloth will take up a pistol if his life or his country demanded it. She had seen boys barely old enough to carry a gun with gaping holes in their chest and villages ravaged and burned in the war.

And this man would die like the rest, if she did not do her duty to him. He’d saved her and now she must do the same for him.

With such thoughts distracting her, she didn’t realize she’d paused her singing until she heard a low, gravelly voice.

She looked down to see dark eyes watching her.

“Sing,” he repeated, but he’d barely finished the word when a ragged cough took over his body.

“A belt of straw and ivy buds, with coral clasps and amber studs, and if these pictures may thee move, come live with me and—”

“Be my love.” His voice was hoarse, even more than she expected for someone who’d slept for two days. She lifted from the bed to pour water from the pitcher into a cup.

When she lifted the cup to his lips, he coughed and it dribbled down his chin. “Easy.” They tried again, but still, most of the water ended up down his chest. His tunic absorbed the excess liquid and clung tightly to his body, so she could see every line and curve. His nipples hardened again.

“Let me try this another way,” she said. This time, she dipped her fingers into the cup and let the water drip into his mouth.

He opened wide for more. She leaned closer, her bosom near his face, and poured more water from her fingers.

After the third time, he put her two fingers to his lips and sucked them. A flash of heat shot through her limbs. If she’d been standing, she would have faltered and lost her balance.

His mouth was hot and she suspected it had little to do with his fever.

“More,” he whispered. He stared at her and she could not move, could not speak.

There was a knock behind them and that jolted her out of her frozen state. Miriam stood in the doorway with ice and more water. The man groaned.

She motioned for the maid to come in. As soon as the girl was close, Violet took a tiny chip of ice and put it in the man’s mouth.

The ice would help his thirst, but she also was afraid for him to speak. The need in his eyes was too real, too close to the desire that she felt. But he was a stranger. A beautiful, dark, bewitching stranger who had risked his life for her, yet she knew almost nothing about him.

A fact that she could remedy. No. What was she thinking? He was wounded, disoriented, and who knows if he mistook her for his wife or some mistress. A sharp pang twisted in her gut. Did he have a mistress? She’d already considered that he could be married, but she hadn’t thought about the possibility of a mistress.

He was a virile, handsome man with a body any sculptor would worship and carve into stone. She’d seen it all, every wicked inch of him. The thought of that body being pleasured by some other woman made her ill.

“Do you or the gentleman need anything else, my lady?”

“Perhaps the cook has some broth. But please make sure it is tepid, not hot.”

Miriam set down the tray of ice and curtsied before exiting the room.

He rubbed his temples, then when Miriam was gone, he turned back to her. Though he whispered the word, “Water,” his eyes said something else.

She plopped another ice sliver into his mouth. He sucked on it, watching her still. She felt a flush run down from her ears to her belly. If she didn’t know better, she’d have thought his fever was catching.

A foolish part of her longed to demand if he had a mistress, but she bit her lip. That was not the first question she should ask him. And, he was so weak, it was better if he didn’t speak at all.

She put her hand to his mouth. “Do not try to speak, sir. You are weary and hoarse.”

He opened his mouth and before he could argue, she fed him another ice chip.

“You have a fever and you need to rest.”

His forehead was still warm. It could be a long night if his fever didn’t break. But he was at least alert for now, which was a good sign.

She stood up, intending to move aside the blankets and leave him with the sheet, but he reached for her arm.

“Don’t.” Under his stare, she froze again. “Do not. Leave.” Though the words were gravelly and low, it was a command, not a plea.

She pulled aside the blankets, careful not to touch his thighs, and moved a chair close to the bed. The mere foot of space between her seat and the bed seemed much farther. Every little movement made her aware of the hard chair beneath her and the cool air brushing over her skin.

She missed the heat of his body next to hers.