Today we are welcoming Natalie-Nicole Bates to the blog. She’s here to share a character interview with us. The characters are from her latest book, Back To You. If this sounds like a book that you would be interested in reading, please find buy links at the bottom of this post.

Character Interview: Lynsey Reznor from Back To You by Natalie-Nicole Bates

Today I’m pleased to get a chance to visit with my heroine, Lynsey Reznor, from my contemporary romance Back To You. Lynsey is going is going to talk a bit about her reasons for leaving Unity when she was a teenager.

NNB: Lynsey, thank you for agreeing to talk about your early years in Unity. Can you tell me about your life before you left at sixteen?

LR: Well, the only family I had was my mother. My father died when I was young—I don’t remember him. I had a normal childhood, I guess. My mother was always there for me. I loved her tremendously.

NNB: I understand you have always been a whip-smart cookie!

LR: I suppose so. I skipped over two grades, so I was actually sixteen in my senior year of high school.

NNB: When you were sixteen, you were offered a scholarship to a school in Lausanne, Switzerland. Did you feel torn between accepting the scholarship and staying on in Unity?

LR: Sixteen was a difficult age for me. I developed a crush on my best friend Suzy’s brother, Nick. I thought he liked me as well, but…he chose to peruse a relationship with another girl.

NNB: That must have hurt very much.

LR: My first love, my first heartbreak. It caused me to rebound to another guy.

LR: Yes, Caleb. A decent guy, but he pressured me for a commitment I wasn’t ready for.

NNB: So you fled Unity?

LR: Pretty much. But I certainly don’t regret it. I even stayed on in Switzerland an additional four years. I feel quite grateful to have been able to travel and be educated in Europe. My French became fluid and effortless, and I learned to ski. All in all, a great life experience.

NNB: I heard there was also a romance with an Olympic ice hockey player?

LR: Ah…Jean-Luc. How I did enjoy my time with him. But the relationship ran in its course. We do remain friends to this day. He’s a coach with an NHL team now. Every time his team came to Florida we always would get together for dinner and speak to each other in nothing but French. He is still the smoothest man I’ve ever known.

NNB: Sounds like fun. Do you miss Miami yet?

LR: Not really. Like my time with Jean-Luc, my time in Miami was great while it lasted, but a thing of the past nonetheless. I am happy, excited, and looking forward to returning to my hometown of Unity.

NNB: Much luck, Lynsey, I wish you nothing but the best and I hope you find everything you are looking for in Unity.

Read more about Lynsey and her life in Unity in Back To You, available now at Bradley Publishing! Back To You was a proud finalist at the 2012 Festival of Romance Reader’s Awards. 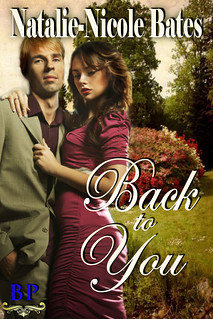 On the surface, Lynsey Reznor seems to have it all. She is beautiful, brilliant, and a successful true-crime writer who has been living the past decade in Miami. But what Lynsey lacks is what she needs the most—a family.

After the death of her mother, and yet another failed relationship, Lynsey makes an impulsive decision to return to her hometown of Unity. But Unity will present its own bittersweet memories, most notably, her first love, Nick Lincoln.

Twenty years ago, Nick broke teenager Lynsey’s heart when he decided to marry another. He had his own private reasons—reasons he never explained to Lynsey. Now she is back, along with a chance to reclaim her love. But Lynsey wants answers from him that he may never be able to give out of duty and guilt.

Natalie-Nicole Bates is a book reviewer and author.

Her passions in life include books and hockey along with Victorian and Edwardian era photography and antique poison bottles. Natalie contributes her uncharacteristic love of hockey to being born in Russia.

She currently resides in the UK where she is working on her next book and adding to her collection of 19th century post-mortem photos.

Natalie-Nicole Bates can be found:

Back To You can be purchased:

When he heard her, he came to her, took her into his arms, and kissed her. It was a comfort that he wasn’t regretting their lovemaking. She didn’t think she could handle being rejected by him twice in her lifetime.

“Do you have to leave soon?” she asked.

“I’m sorry. I don’t want to, but I have to.” He went to the stove and prepared her a cup of coffee. “I think we should start planning our wedding. We could be married at Christmas.”

She was taken aback. Is this his proposal ?  This was supposed to be so romantic and memorable, not talk about planning a Christmas wedding while he stirred a cup of coffee.

“Do you even want to get married?” She took the coffee mug he offered. “I mean, it wasn’t that long ago that you told me you weren’t sure you ever wanted to be married again. You said you didn’t see fatherhood in your future, and Nick, I want a baby…more than one. I grew up as an only child and I was so alone. I don’t want my child to have to experience that.”

“Well, I didn’t use a condom last night. You could be pregnant right now,” was his reply.

Heaviness descended upon her heart. This was so not how she wanted this morning to be, and certainly not the marriage proposal she had dreamed of. “I’m on the Pill—I won’t get pregnant if that’s all you’re worried about.”

“I’m sorry, that’s not the only reason we should get married.”

“Then why?” she asked suspiciously.

He let out an exaggerated sigh. “Lynsey, I don’t have time to get into this with you right now. What do you want me to say in the five minutes I have before I leave for work?”

She couldn’t believe his glib attitude.  “How about saying something to me like…‘I love you, Lynsey, and I made a tremendous mistake by not marrying you twenty years ago?’ That would take you less than thirty seconds to say, and you could have easily gotten to your precious job on time.”

Suddenly his jaw set and his eyes narrowed. “I didn’t make a mistake by not marrying you twenty years ago! I let you go to become a success in life—and you did. I can’t regret that!”

“So, what I thought all these years was correct. I was nothing to you but a quick and easy way to shed your virginity.” Just saying the words was devastating.

“That’s not it at all,”  he vehemently insisted. “You were always so intelligent. I mean, you were a sixteen-year-old senior in high school! Just how many grades did you skip over, anyway?”

“Two,” she answered in a low voice.

“My mother loved you. She would have been happy to have us live with her,” she interjected.

“And we were so naïve, Lynsey. You would have graduated high school with either a big belly, or a baby in your arms…if you had graduated at all.”

She crossed her arms over her breasts and looked at the floor. She was too afraid that if she looked at him she would break down. “Some of the girls in school were married. A few of them had babies.”

He lifted her chin and forced her to make eye contact with him. “And you were too smart to be stuck in this town, and just another housewife. You would have become bored and resentful.”

“I wouldn’t have known the difference,” she countered.

“I had serious doubts then. I still have doubts now,” he admitted.

Her dark lashes flew upward. “What is that supposed to mean?”

“I believe that you will become bored and restless in Unity and will want to go back to Florida or maybe California. I have a job and a family here, Lynsey. I don’t ever want to give that up. I’m afraid that we’ll have a child, and you’ll take my baby and leave. I can not allow that to happen.”

She couldn’t believe what he was saying. Nothing was further from the truth. “Do you think I would have sunk so much of my savings into that house just to abandon it? I would never, ever do what you’re saying. But if circumstances changed, I would expect you to support what was best for our family. Couples who are committed make sacrifices for each other!”

It was becoming clearer and clearer that things were rapidly falling apart between them.

“Lynsey, didn’t what happened between us last night mean anything to you?” he asked.

She chuckled unpleasantly. “I suppose that with us living in such close proximity, last night was inevitable. But don’t worry about it happening again, Nick. When you get home this evening, I won’t be here.”

“Where are you going to be?”

She wanted to hurt Nick like she was now hurting. “I’m sure that Caleb wouldn’t mind me bunking down at his house for a week or two.”

“Over my dead body,”  he seethed. “I will drag you away from him kicking and screaming if it comes to it. I’ll handcuff you to my bed if need be. Believe me, Lynsey, I’ll do it!” He flopped down into a kitchen chair and buried his face in his hands.

“I have to go now, Nick. I’m meeting your sister for breakfast. Listen to me. You need to pull yourself together. In your line of work, bad things happen when you lose your concentration.”

When he didn’t reply, she let out a sigh of resignation and headed for the door. At the last minute she turned to him. “Thanks for almost making it happen between us.”