Welcome also to Steamy Saturday! This is the day of the week that I post my thoughts on a romance that is on the steamier side! Nothing on but the Radio is a story that I read some time ago. I received a copy from The Romance Reviews in exchange for an honest review.  Hope you enjoy my thoughts. 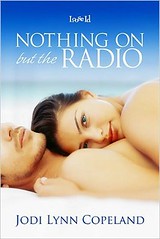 Nothing on but the Radio by Jodi Lynn CopelandISBN: 978-1-61118-419-8Publisher: Loose-Id.comRelease: May 2011Source: I received a copy of this book to read and review from TRRBlurb: To hell with her critics; Taryn James is going to make it in the songwriting industry. If only Brian Macovney weren’t standing in her way. Gorgeous he may be, but he’s also nasty, trampling on her dreams by insulting her lyrics and all because he once failed to deliver in bed.It’s been five years since Brian had his ego cut down its knees when he failed to perform sexually with Taryn. Now he’s forced to see her again, at the Sugarfoot Island songwriting conference, which he attends as a sponsor and she an aspiring songwriter. From nearly the moment of their reunion, Brian recognizes two truths: Taryn is a highly talented songwriter. And Brian’s eager to regale her with talents of his own…in his bed, on his balcony, bent over the edge of his Jacuzzi tub…Taryn can’t decipher what’s hotter, her need for revenge, or the feel of sexy-hot Brian in her arms, their body’s joined together and slick with passion. Temptation this good is damned hard to pass up.The rules are firm…no relations between the conference staff and songwriters…but then the conference hasn’t actually started, and weren’t rules made to be broken?Publisher’s Note: This book contains explicit sexual content, graphic language, and situations that some readers may find objectionable: anal play/intercourse.

Isn’t it great to get one more kick at the can?  The one night that goes spectacularly wrong in your life, you get a chance to do over.  Would you take it?  Can you get past a horrendous first date?

Nothing on but the Radio is a short story about Taryn James, who is determined to succeed as a songwriter, and her nemesis, Brian Macovney.  Several years before Taryn and Brian had a bad one night stand ending with Brian lashing out at Taryn by telling her she would never succeed at songwriting.  Here it is some time later and Taryn decides to sign up for a songwriting conference, knowing that Brian would be there.  She decides to face down her one and only bad date – the man she hasn’t been able to forget.

This short little story is hot and graphic.  It even comes with it’s own warning from the publisher!  Certainly not for the faint of heart.  It is, however, a story about a first date that ends in bad sex and how the couple recovers from that point so the sex is the central theme of the book.  At first I felt that both the main characters were quite self-centered, but it was interesting to see how they changed and grew over the space of this story!  Although the story only covers about 140 pages, it has the feel of a full novel.  This is a neat little read.  Pick up a copy and give it a read.

Nothing On But The Radio is available at Amazon

(257276)
$29.99 (as of January 28, 2023 10:48 GMT -08:00 - More infoProduct prices and availability are accurate as of the date/time indicated and are subject to change. Any price and availability information displayed on [relevant Amazon Site(s), as applicable] at the time of purchase will apply to the purchase of this product.)