Today we are welcoming Christine Young to the blog! She is the author of A Marriage of Inconvenience and is touring her book with Goddessfish Promotions. She’ll be giving away a $25.00 Gift Card to a commenter from the tour. If you want to increase your chances of winning, click HERE for the list of blog to leave more comments 🙂

I hope you enjoy what Christine is sharing from her book. Be sure to leave a comment in order to win! 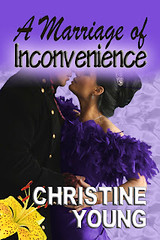 When the duchess decides to wed her to a wastrel and a fop, Ravyn Grahm takes matters into her own hands and declares her engagement to another man. Instead of fessing up and telling her great aunt what she has done, she goes through with the pretense. Aric Lakeland is the bastard son of an earl and has a dangerous reputation. But Ravyn is willing to do most anything to keep the duchess from discovering the lie.

He’d bought land in America, looking to put down roots and end his life of adventure, but Aric Lakeland got more than he bargained for when he encountered a beautiful heiress who made a promise she didn’t want to keep. But the promise could not be undone and standing between them were more obstacles than either ever dreamed. Aric had made plans to spend the rest of his life in America and that was at odds with Ravyn’s plan of living in England and running her father’s estate. Now, he’ll have to choose between his dreams and the woman he loves more than life.

“Well, I can see that marriage hasn’t trimmed Amorica’s tongue one bit,” Aric said wryly as he undid the saddle cinch. “She can still tear a mean strip when she has a mind to. Only thing she does better than make biscuits.”

“Of course,” Damian said, lifting the saddle one-handed from the horse’s back, “the fact that a man knows he has it coming tends to make it sting all the worse.”

Aric spun around, ready to vent his frustration, furious with Damian’s calm words, but the other man had already turned away. Saddle balanced on one shoulder, saddlebags and bedroll slung over the other, Damian was walking through the barn door, whistling.

Letting out another long breath, Aric made another stab at reining his temper. The whole point of bringing Ravyn to the farm had been to show her how completely unsuited to this lifestyle she was. It had not been to point out what a beast he had been to her. He knew that already. And he felt guilty as hell. He didn’t need Damian to make those feelings grow.

Just as he knew his plan to make Ravyn cry annulment was working. Slowly, surely, day-by-day, hour by hour, minute by minute, he was wearing her down. He could hold out longer than she could.

I shall not say the word.

Every moment brought Ravyn closer to that time when she would have to admit defeat and free both of them from the cruel trap they had entered into that fated day in England. They needed to be free of a marriage that should have never happened, no matter how promising it had seemed at first.

Aric hoped Ravyn would give up soon. Each day with her became harder to endure. Her scent, the memories of how she felt in his arms and the knowledge of what they might have had tormented him. He didn’t know how much longer he could go on grinding a beautiful little imp into the dirt. He had never felt another person’s anguish so completely. He would rather suffer a thousand deaths than put Ravyn through this. He would rather be hurt himself than to inflict the pain on Ravyn. Long ago he had learned how to endure pain, how to control it. When he had learned he was a bastard and had suffered insult after insult from the very people who embraced his brother with respect and love, he had learned to hide the anguish and the loneliness. 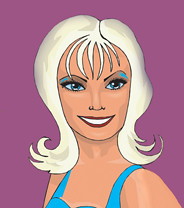 Born in Medford, Oregon, novelist Christine Young has lived in Oregon all of her life. After graduating from Oregon State University with a BS in science, she spent another year at Southern Oregon State University working on her teaching certificate, and a few years later received her Master’s degree in secondary education and counseling. Now the long, hot days of summer provide the perfect setting for creating romance. She sold her first book, Dakota’s Bride, the summer of 1998 and her second book, My Angel to Kensington. Her teaching and writing careers have intertwined with raising three children.  Christine’s newest venture is the creation of Rogue Phoenix Press. Christine is the founder, editor and co-owner with her husband. They live in Salem, Oregon.