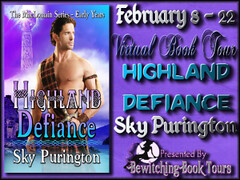 Today we are welcoming Sky Purington to the blog. She is the author of Highland Defiance, and is here to share some information about her book as well as give away some prizes in a Rafflecopter giveaway. She is giving away: 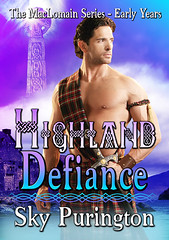 Mildred, a young woman living in New England during the onset of World War II, worries about her family. What is to come? How will life change? Little does she anticipate change is to come not from war, but from an unexpected trip back in time to medieval Scotland.

Adlin, Chieftain of the MacLomain clan, will never forget the moment he lays eyes on her. Though he rules one of the most powerful clans in Scotland, Mildred redefines the man he thought he was. Her quick wit and perseverance humble his natural arrogance. Her sensuality cripples his defenses.

The maddened determination of a rival chieftain threatens their very existence. Caught together in time, they must find a way to evade the mighty MacLeods and keep peace in the Highlands. But lust, rage, and potential war simmer on the edge of their every move.

Will Mildred and Adlin find true love despite the odds? Find out in HIGHLAND DEFIANCE. 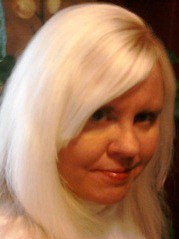 Sky is the best-selling author of seven novels and several novellas. A New Englander born and bred, Sky was raised hearing stories of folklore, myth and legend. When combined with a love for nature, romance and time-travel, elements from the stories of her youth found release in her books. Readers have described her work as “Refreshing” and “Unforgettable.”

Purington loves to hear from readers and can be contacted at Sky@SkyPurington.com. Interested in keeping up with Sky’s latest news and releases?

Highland Defiance can be purchased at Amazon

More silence, too much silence.

It upset him. All his life he’d been patient with everyone now this mere slip of a girl was making him wait longer. Fully aroused and unbelievably out of character, he tightened his hold and ran his lips along the edge of her smooth, damp jaw.

Inch by inch, he ran his lips down toward the edge of her lips only to notice that they were quivering. Before he—with five hundred years of wizardly knowledge under his belt—knew what was coming she reached around and turned not only her lips to his but her entire body until her front meshed against his.

He growled with need, cupped her arse and pulled up, meeting the swift rise of her legs as they wrapped around him. Lips sweet with sea water crushed against his. Their tongues swooped and crashed more thoroughly than the consuming, eager ocean that cocooned them.

“Bloody hell,” he murmured into her mouth.

Unlike Mildred, he was without clothing and his member struggled against her warm belly like an anxious serpent desperate for a deep, clenching mystery. For all her youth, her lithe body seemed to have an excellent grasp of the male anatomy. Her legs tried to climb his torso and her lips molded to his with the talent of a sensual sea siren.

Before he understood what he was doing, Adlin shoved through the waves and turf and had her pinned beneath him on the less-than-smooth Scottish shore. Would this woman never stop pulling dangerous magic from him? It mattered little as he clasped her hands and dragged her arms above her head.

They still had so much to talk about. So much he needed to tell her. When a tiny, little whimper of pleasure fell from her parted lips, Adlin didn’t give a bloody hell about anything anymore but getting as deep inside her as possible. With a sharp tug he pulled down the front of her clingy, wet, white garment and wrapped his lips around an eager nipple. Arching in pleasure, she cried out.

He almost burst with release.

Forget magic. Shoving this flimsy thing up her wet thighs and settling in for the plunge seemed so much sweeter an idea.

As you can read above, Highland Defiance is described as ‘The MacLomain Series – Early Years. As you can well imagine, this book is the beginning of a series. It tells the story of Adlin, the Chieftain of the MacLomain clan and Mildred. It is a time-travel romance with the book starting in 1942 with Mildred and her family getting ready for work at the factory and commenting on how many men are going off to fight in the war. Mildred apparently faints and finds herself in Scotland in 1050 and in the presence of Adlin.

This relatively short story sets the tone and the details for the the following books in this series. We discover all the various characters and their connections, but the main focus of this book is the relationship between Mildred and Adlin. Their connection is an achingly beautiful love story. The story is told in such a colorful lyrical style that the reader is immediately drawn into the world of ancient Scotland and the twists and turns of this relationship.

A beautifully told story – easily read in a couple of hours – certainly worth picking up a copy and experiencing this author’s storytelling!

(10680)
$69.99 (as of June 22, 2022 12:00 GMT -07:00 - More infoProduct prices and availability are accurate as of the date/time indicated and are subject to change. Any price and availability information displayed on [relevant Amazon Site(s), as applicable] at the time of purchase will apply to the purchase of this product.)