Today is a review for a book that I read some time ago and really enjoyed. I enjoyed it so much that I included it in a top 10 Romances from 2012 list that I created for my friend Justin Bog. Stay tuned for the whole list – I’ll be posting it in a few weeks! 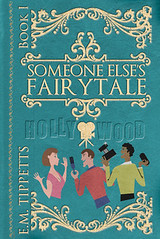 Someone Else’s Fairytale by E.M. Tippetts
ASIN: B006JD115K
Release: Dec, 2011
Publisher: Self-pub
Source: I asked for and received a copy of this book from the author to read and review

Blurb:
Jason Vanderholt is Hollywood’s hottest actor. Chloe Winters is a college student who hasn’t bothered to see most of his movies. When they meet by chance, she is underwhelmed but he is smitten. Chloe becomes the woman every other woman in America is dying to be, but it just isn’t her fairytale.

Someone Else’s Fairytale is the story of Chloe and Jason – two people who on many levels couldn’t be more different!  Jason is America’s latest young movie star and the focus of female attention everywhere!  Chloe is a college student who is just trying to finish school.  She is talked into being an extra for a movie being filmed on campus, even though she doesn’t really know what it’s about and she probably wouldn’t know the star even if she tripped over him.  She figures out who Jason is because he looks just like his promo pictures and finds herself chatting to him while he signs an autograph for her friend. She then finds herself escorted to his trailer so that the can chat some more.  The next morning Chloe wakes up to find her mother at her door holding a copy of the local paper with her and Jason on the front page.  When Jason shows up at her work, with his bodyguards, that makes her story that they are just friends look like a lie.

Although Jason is trying to woo Chloe, how does he do this when she just wants to have a normal life?  It’s an interesting premise for a book – what happens when Cinderella doesn’t want to be in the spotlight?  All the advantages that come with dating a movie star don’t interest her.

I loved this book!  Poor Jason – he really likes Chloe, but he doesn’t have a clue how to date a non-movie star.  His world isn’t normal, but he tries really hard to be normal for Chloe. Chloe on the other hand is a bit put off by his huge celebrity status.  She’s mobbed by fans, had her tires slashed and had photographers stalking her.  Is Jason really that special that it’s worth putting up with the invasion of her privacy?

You really need to pick up a copy of this book!  I hope that you enjoy reading it as much as I did!

Someone Else’s Fairytale is available on Amazon