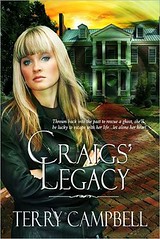 She’s from the twenty-first century…

Thrust back in time, Frankie Mathews is the quintessential fish out of water. She’s gone from running a major money market fund to a world where women milk cows. Too bad for Frankie that the nearest she’s ever been to a cow is a “Got Milk” commercial. Now, she has to save the life of Confederate Colonel Benjamin Craig and return to her own century with him in tow, before she changes history beyond recognition—and gets killed in the process.

To survive the Union deserters and his grasping, widowed sister-in-law, Ben needs Frankie’s quick thinking and never-give-up attitude that comes from her independence as a 21st Century woman.

But can the two lovers span the centuries between them and find a common future?

This book spans centuries to bring two soul mates together.  Craig’s Legacy combines outstanding characters and a beautifully told love story mainly set in war torn Virginia to produce a engaging story that is a must read.  One of the most realistic time-travel romances I’ve read in a long time!

Craig’s Legacy  was a wonderful surprise for me to read.  I’m not sure what I expected from the blurb, but what I found was a wonderfully warm, humorous, gentle romance. Frankie Matthews has been voted the Twenty-First Century’s Financial Wunderkind.  She’s a tiny little thing, but she carries a punch in the financial world as she is the portfolio manager for a major investment fund.  She was orphaned at an early age and has grown up with her Aunt Ginny and Uncle Max as her “parents”.  They own Craig’s Knoll – property that has been handed down through the generations, and Frankie has decided to move back home after being away from home for years.  But her dreams start up again and neighbours claim that the house has a ghost.  Next problem – she can see the ghost and he’s yummy!  Not only that, he talks to her about saving him and leaves her flowers.

Ben Craig was killed by deserters in 1864 while trying to protect his family.  He is now a ghost waiting for the right woman to go back in time to save him and recover his legacy.  He feels that he has found the right woman in Frankie.  He says “We’re soul mates.  We’re meant to be together, in life as well as death.  You must trust in yourself and me.  We’ll be joined, but not in your time.”  Frankie is understandably unwilling to go bak to a time with none of the comforts that she currently enjoys, but Ben pushes her into a wardrobe and she lands in 1864.

This is one of the few time-travel novels that I’ve read that dealt with the “realities” of a person being in a different time well.  Frankie was not pleased to be sent back in time.  The lack of e-mail and tampons did not make her a happy camper!  She was continually being caught doing or saying something modern and as a result was looked at as being a bit touched in the head!  The situations that she got herself in had me chuckling and even laughing out loud at points!  Ben, the ghost, was an attractive, charismatic man accustomed to the customs and conveniences of the 21st century.  Ben in 1864 was a somewhat chauvinistic man, typical of his time.  It was interesting to see the clash of a woman from the 21st century and a man from the 1800s!  It made for some lively disagreements!

The secondary characters were also outstanding.  Beatrice is one of the evil characters and was so well written you just wanted to slap her!  I loved the character of Uncle Henry.  He was smart, pragmatic and full of humor.  He served as Frankie’s ally and his character allowed the author to bring in all sorts of information, from the place of slaves in the 1860s to folk medicine.

This isn’t a short cute story.  At about 400 pages, it could be an intimidating read.  I found that it started out slowly – the first 50 or so pages almost dragged as it set the scene for the rest of the book.  The slow feeling really didn’t last beyond that, in fact, I became so absorbed with the story that I read the last 200 or so pages without stopping.  Happily finishing with tears and a kleenex!

I certainly recommend this book! It is a great time-travel novel and filled with great information on the civil war!

Craig’s Legacy is available on Amazon

(102713)
$149.99 (as of February 2, 2023 10:13 GMT -08:00 - More infoProduct prices and availability are accurate as of the date/time indicated and are subject to change. Any price and availability information displayed on [relevant Amazon Site(s), as applicable] at the time of purchase will apply to the purchase of this product.)