Steamy Saturday is the day of the week where I review a romance that I’ve read that is on the steamier side!  I hope you enjoy this week’s selection! 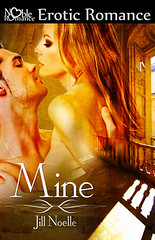 Mine by Jill Noelle

Blurb: In a decadent empire of the far distant future, Gabriella is chosen to serve as a sexual companion for the king. However, Brie has no intentions of joining the Select Few. In fact, she has another mission, entirely…one that is destined to alter the future of the kingdom’s poverty-stricken population.

Michel also serves the king. It’s his job to train Brie to suit the king’s sexual preferences. Trouble is, Michel wants Brie for his own.

Gabriella is one of many chosen at a young age to serve the king.  It is something that she has always know is her destiny while growing up.  The time has finally come for her to enter her training to sexually serve the king and her tutor will be her friend Michel.  Gabriella is attracted to Michel, she sits and watches him exercise, fantasizes about her training.

Michel serves the king as a trainer.  He “trains” or initiates all the girls that will serve the king.  He has been doing this for years, but he has reached the point where he can no longer support his king and has another agenda.  He hopes to bring down the king’s corrupt rule.  What he doesn’t realize is that Gabriella has an agenda as well.

This short little story is plenty spicy!  At just over 70 pages the story is over and done with quite quickly.  The author manages to pack alot of action into these pages and although this story doesn’t have many pages, it feels like a full length story.  There is a comment at the end of the blurb on Amazon that although this story is set in the future, it has a “historical” tone.  I thought that was an odd comment to make, but it is true.  This story kind of feels old fashioned, somehow.

The characters are well formed and interact well together.  I like the secondary characters.  The king is suitable evil and uncaring towards his people.  His character is so well written that his behavior elicits a strong negative feeling from the reader.

Pick up a copy of this book and experience it for yourself.  Jill Noelle has several other stories published.

(257554)
$29.99 (as of February 5, 2023 10:29 GMT -08:00 - More infoProduct prices and availability are accurate as of the date/time indicated and are subject to change. Any price and availability information displayed on [relevant Amazon Site(s), as applicable] at the time of purchase will apply to the purchase of this product.)