Welcome also to Series Sunday! This is the day of the week that I get the pleasure of talking about my favorite thing – books in series. I haven’t done this series in a while – too busy, but I have been reading books in series, so maybe it is time to get caught up! Today I’m going to continue where I left off with Elizabeth Boyle’s series.

I love the books that Ms. Boyle writes. She has me reading furiously to get to the next part, she has me laughing, and usually she has me crying at some point in the story. I hope you enjoy hearing about her books that I’ve read! 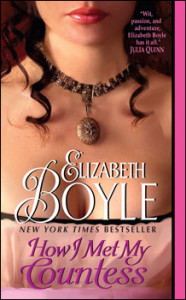 How I met My Countess by Elizabeth Boyle

Source – I purchased this book to read and review

…until he met Lucy. The improper and impetuous daughter of an infamous spy, Lucy Ellyson saved Clifton’s life and taught him everything he needed to know about serving his country in the dangerous shoals of the war torn Continent… even how to fall in love. He vowed he would come back to her, he would make her his unconventional and unlikely countess, but the war and duty kept them apart for too long and when he finally returned, she was gone.

Lucy’s father had told her that the Earl of Clifton would never return for her, warned her that she would never find a place in a society that would scorn her birth. And he was right. For when Clifton returns, it isn’t to reconquer her heart, but merely to ask for her help in finding an elusive dowager, never realizing that the Marchioness of Standon — the woman who holds the keys to his family fortune — is none other than Lucy herself. It doesn’t take Clifton long to realize that his greatest mission yet may be to face the tragic secrets of their past and rediscover the passionate love that once ignited them both…

Our story starts years earlier with the training of the Earl of Clifton. Clifton sees himself as a spy for England, but before he can be sent out into the field, he is sent for training to the Ellyson household.  Although the master spy trainer is the master of the house, Lucy and her sister play important roles in the training of the young men that England depends on, in their fight with the French.  Lucy has had contact with many young men who have been trained by her father, this is the first time she has fallen in love with one of them.

The Earl of Clifton is determined to be a spy for England.  He is titled, he is bright and he is absolutely unprepared to deal with Lucy.  She is different than any other woman of his experience.  But he must leave her to do his duty.  He promises to come back for her.

Many years later, when investigating a woman who seems to be responsible for an inheritance, he discovers Lucy again.  Although he searched for her several years ago, he never imagined that she would be the Marchioness of Standon that he is searching for.  Saddened by the fact that Lucy apparently married not long after he left, he is determined to win his Lucy back.

This is another story by Ms. Boyle that I have absolutely loved!  She seems to have a way about her storytelling that draws the reader in.  Readers cheer for the good guys and boo for the bad guys.  Lucy is a woman who needs a happily ever after.  She’s strong and she has been through a lot, and this story definitely has the reader jumping up and down and cheering by the end.  An unconventional storyline, but a wonderful one that stays with the reader long after the story is back on the shelf.

There are many great books in this series.  Please pick up the whole series and make your way through.  Let me know if you enjoy this series as much as I have.

How I Met My Countess is available at Amazon

(149456)
(as of February 2, 2023 10:13 GMT -08:00 - More infoProduct prices and availability are accurate as of the date/time indicated and are subject to change. Any price and availability information displayed on [relevant Amazon Site(s), as applicable] at the time of purchase will apply to the purchase of this product.)