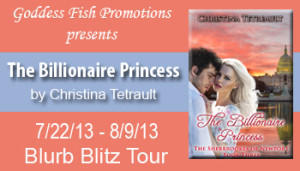 Today we are welcoming Christina Tetrault to the blog! She is touring her book with Goddessfish Promotions and is here to share some information about her book, and to giveaway a $15.00 Amazon or B&N gift card to a random commenter. If you want to find more blogs to leave comments on, click HERE. 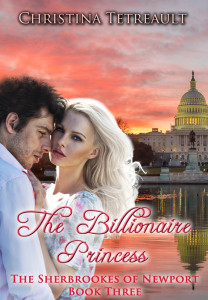 She was raised as an American Princess

Following the betrayal of a former lover, Sara Sherbrooke swore off relationships, too afraid she would be used again. Instead she has devoted all her energy to succeeding in politics without relying on her family name. That is until one night in Hawaii with her brother’s best friend Christopher Hall.

He is a self-made billionaire

Technological genius and CEO of Hall Technology, Christopher Hall first met Sara Sherbrooke when he and Jake Sherbrooke were college roommates. While attending Jake’s wedding in Hawaii, Christopher is reintroduced to Sara, a beauty who was once way out of his league. But now as the most eligible bachelor in Silicon Valley, the only thing stopping Christopher from pursuing Sara is the thought of betraying his best friend.

As they work together to promote a new education initiative, neither can deny the attraction between them. But will their growing romance be worth all of the consequences?

As Sara sat sipping a bottle of sparkling water, the door opened again.  Silently, she watched as Christopher Hall climbed in.  If she hadn’t seen him countless times on the web, she never would’ve recognized the man who’d climbed in the limo as her brother’s Cal Tech roommate.  She recalled meeting the tall skinny kid with shaggy light brown hair and glasses when her family moved Jake into his dorm freshman year.  On the few occasions she had seen him back then he’d been dressed in jeans, Converse sneakers and t-shirts with hard-rock bands emblazoned on them.  The man seated across from her now seemed to be someone else entirely.

Today his light brown hair was cut fashionably short and there was no sign of the glasses he used to wear.  And those were not the only changes she noticed.  There was no missing the way his broad shoulders filled out his dress shirt.

For a second Sara sat speechless and stared at the man, as her pulse kicked up a few notches. Before he noticed her staring, Sara regrouped and pasted on her best society smile. “Hi Christopher. Did Jake tell you what is going on?”

Christopher shook his head.  “No.  He just said to get out here, but I have a guess.”

Sara expected him to continue and let her in on his suspicions.  Instead he grabbed a soda water for himself.  When several minutes passed and he didn’t say anything else, she couldn’t keep herself from asking her next question, “So, what is your guess?”

Christopher paused with the bottle halfway to his mouth.  “My money is on a wedding, but it’s just a guess.”

“A wedding?  No.  Charlie and Jake wouldn’t do that.  Our parents would be furious.”

“Like I said it’s just a guess, but I know Jake and an out-of-the-blue wedding wouldn’t surprise me at all.”

Would her brother do that to their parents? Sure a sudden unexpected wedding might be something Jake would talk about, but not something he’d ever go through with. Jake Sherbrooke and Charlotte O’Brien’s wedding would be a huge affair much like Dylan and Callie’s the year before.  Considering the size of the Sherbrooke family and the fact that the American public seemed so fascinated by them, how could it be anything less?

“Have you met Charlie?” Sara asked in an attempt to start a conversation.  Over the years they’d had few conversations so Sara figured she could either ask him about his company or the one thing they had in common, her brother.

Christopher returned his water to the holder near the door and Sara’s eyes watched the way the muscles in his upper arm flexed and moved.  The sight sent her hand toward the air vent, which she redirected toward her face.

“I met her last year at Jake’s office and we’ve all gotten together several times since.  I like her.  She seems perfect for him.”

“I think so too.”  Sara reached for more water.  “She’s definitely the right woman for my brother.”  She took a sip from the bottle and then asked him about his company. 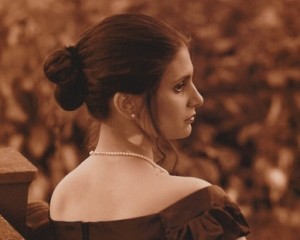 I wrote my first story with characters similar to those in the Sweet Valley Twins books at the age of 10 on my grandmother’s manual typewriter. As I got older my stories and characters became more mature. During my freshman year at UMass Dartmouth, I read my first romance novel and fell in love with the genre. I have been writing contemporary romance ever since.

Today I live with my husband, three beautiful daughters and two dogs in Massachusetts. Whenever I have a free moment you’ll find me either reading a romance novel or working on my most current story