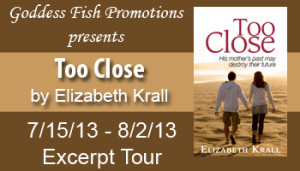 Today we are welcoming Elizabeth Krall to the blog! She is touring her book, Too Close,  with Goddess Fish Promotions. She’s here today to not only share some information about her book, but also to give away:

To increase your chances of winning, click HERE to find more blogs to leave comments on. I hope you enjoy the information shared! 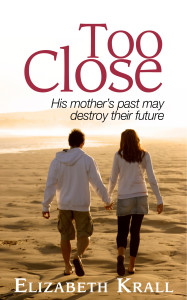 Three weeks before their wedding day, Nicola and Greg discover that they may have the same mother.

They met when Greg joined the San Francisco newspaper where Nicola is the travel editor. After six months, eager to start a life together and raise a family, they decide to marry.

When Nicola finally meets his family in Seattle, and mentions the circumstances of her adoption, Greg’s horrified mother is forced to reveal the shameful secret she has kept for 36 years.

As they struggle to deal with her revelation, their relationship is challenged and strained. If his mother’s suspicions are true, they will be forced into a devastating choice: break all of society’s rules and fight for their love, or break their hearts and give each other up.

It will be the greatest test their newfound love has faced – and their love may not survive.

Scene: Nicola has let Greg persuade her to have lunch with him. She has shown him a photo of her family on her cell phone.

“Hmmmm?” She took a bite from a cold chicken drumstick.

“How can your sister be five weeks older than you?” Greg asked, frowning. “I find it hard to believe that you hung around inside your mother’s womb for that long after she was born.”

She laughed at his look of confusion. “Oh I’m sorry, Greg, I always assume that everyone knows I’m adopted!” She patted his hand in sympathy. “I was nine months old when they adopted me. I’ve always admired Mom for that, when she already had a baby girl not even one year old.”

The confused look had given way to interest. “Really? That’s something we have in common. No, that’s not strictly true; my mother is my real mother, but my father is my stepfather. They married a few weeks before I was born. She’s always refused to talk about her life then, or my natural father, and, frankly, I don’t care. Dad – Edward – is my father. He taught me to sail, helped me with my math homework, and gave me a good talking-to when I needed one. Or rather, when he thought I needed one!”

Nicola nodded enthusiastically. “Yes! That’s it. I know absolutely nothing about my natural parents, and don’t want to. This is my family.” She stabbed at the cell phone. “They are the people who have loved me my whole life, and whom I love. What’s DNA got to do with it?”

She grinned at him and he grinned back. The awkwardness she had felt when they sat down was now gone in this discovery of shared family life. 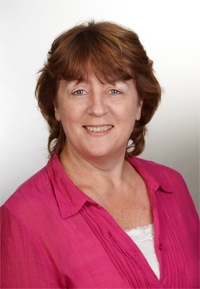 Elizabeth Krall grew up in Canada and lived in London, England, for many years. She has now settled in Sydney, Australia.

Most of her career was spent as an editor, but now she works as a print and digital graphic designer. An unexpected side-effect of leaving editing was the resurgence of an interest in writing. Her first novel, Ship to Shore, was published in February 2012; her second, Too Close, in January 2013.

She is also the author of an occasional series of short stories themed around holidays, called Holiday Romances.

Elizabeth can be found:

Too Close can be purchased:

Previous Post: « The Forgotten Ones is Free on Amazon today and tomorrow
Next Post: Super Book Blast & Giveaway for Just Perfect by JoMarie DeGioia »