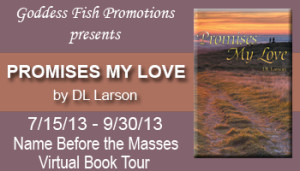 Today we are welcoming L.D. Larson to the blog! She’s here to answer some of my questions and to share some information about her book, Promises My Love. She’s also going to be giving away a copy of one of her previously published books, hardcover (US only) or e-book format to 2 randomly drawn commenters during the tour. If you are interested in entering, just leave a comment below. If you want to find more blogs to leave comments on, the list can be found HERE.

Barb –  If someone else wrote a blurb about your book what would it say?

D.L. – A young man’s revenge brings despair to him and his family.  Will hate rule his life, or will his wife’s love be enough to make him whole again?

Barb – How would my friends describe me in 20 words or less?

D.L. – They’re surprised I write such serious books. I’m easy-going and generally pretty corny.  I enjoy my own company but have to have family about.

D.L. – I would live by a lake, with big, shady trees around my large 2 story house with its wrap-around porch.  My home would be close enough for my family to visit on weekends, but I would have quiet during the week, unless I wanted to be the rowdy one!

Barb – When did you begin writing?

D.L. –  I always knew I was meant to be a writer, but not until I turned 36 did I decide to pursue a writing career.  I reminded myself every day that writing was not a hobby – it was important to make that distinction toward publication, even in the early stages while juggling work, family and kids sports.  Too many times I veered off course, but determination always pulled me back to continue on.  My youngest child was in first grade when I started and I thought for sure I would be published by the time he reached eighth grade.  When that didn’t happen, I aimed for the end of his high school career.  He was out of college before I found my first publisher.  It’s been a roller coaster kind of a journey.

Barb –  Do you read reviews written about your book?

D.L. – I do.  I want to understand what readers are thinking or if my work has satisfied their expectations.  I like knowing how my work stacks up compared to others.  Anyone want to write a review?  Have at it!! J

D.L. – I’ve always been fond of Joe Douglas, the gambler.  He’s wild and has his own rules in life, but has a decency that runs deep.  He is charismatic and rugged, a combination I’m attracted to.

Barb – What were the challenges in bringing this book to life?

D.L. –  I wrote around Francis, my main character in my previous book, for quite awhile.  Finally he revealed himself and I was shocked he had so many problems.  I wanted to share his life and hardships but did not want to write a depressing book, so I chose to express snippets of his past rather than morbid scenes.  I hope I struck a good balance.  Francis is a good man who simply wants to love his wife and family if only he knew how.

Barb – Did you do any research before start or during of the writing of the books?

D.L. – I learned much about suicide and family abuse from working at Northern Illinois University in the Department of Family Services.  My department hosted educational conferences for professionals and I learned more than I ever wanted to at them.  I had ample opportunity to talk to many therapists and counselors about family dysfunctions over the eleven years I worked in that department.

Barb – What is the one book that you think everyone should read?

Barb – Where is your work available?

D.L. – Werewolves rule!!  I’m writing a sci-fi romance where the werewolf and his soldiers are in league with the Almighty.  It’s outrageous and fun with escapades of other-worldly excitement and romance.

Barb – Are you reading or writing something else at the moment?

D.L. – Oh sure ~ I’m working on the next installment of my historical series.  It’s called, ‘Coming Home.’

Francis stumbles into a romance he had not expected or sought and wonders at how much his life has changed.  Plus, I hope to publish my sci-fi romance called, ‘The Warrior Priest, The Werewolf Prince & The Trials of the Black Universe.  I’m super excited to see that published – keep your fingers crossed that it happens soon!!

Thank you for having me as a guest blogger.  It’s been fun. 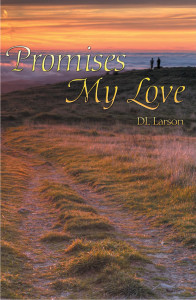 The Story from Promises To Keep continues with … Promises My Love

Francis Frailey fears he might become as abusive as his uncle once was, so he admires his young family from a distance. His plan is lonely, but safe, until his wife Christine sneaks past his staunch decorum. With tender devotion she coaxes him beyond his wretched childhood memories to a place where trust and love grows.

The fragile bond shatters when Francis’ family intervenes and he must decide if hate will rule his heart. Christine promises forgiveness will make him whole, but Francis aches for revenge. He’s determined to kill his uncle and be done.

Christine’s brother, Joe Douglas, has plans of his own that include asking his wife Annie to face her troubled past. But to help Christine, Joe agrees to go after Francis and bring him home. Taking his young son and nephew with him unhinges them all. Joe doesn’t know if the love Francis has for his son is stronger than the hate he harbors for his uncle. Or perhaps Francis despises himself most of all. Joe fears the wrong person may end up dead.

A reminder ~ this is a family saga with several POV!

Once they reached the Douglas farm, Francis refused to stay for the evening meal.

“For damns sake, come in,” her father, Will, ventured.  But Francis stood stiffly at the entrance as she and her children shifted uneasily beside him.  The dangling lanterns above the table and others on the mantel lit up their expectant faces.

Elizabeth opened her arms, and Jimmy and Crystal stepped into her embrace.  Christine eyed her children snuggling safe in her mother’s arms and her throat tightened.

Will Jr. stood, looking as dark and tall as her father.  He didn’t extend a handshake to Francis or offer her a hug, and that just wasn’t done in her family.  Hugs were as numerous and hearty as the horses in the pastures.  Instead, her brother’s usual friendly grin tightened and his gaze hardened as Christine fumbled with their trunks and gestured for her children to greet their aunt and uncle.  Their watching made her self-conscious and her fingers inched toward her face to hide the scratch.

Her chest tightened all the more when her parents gaze moved from Francis to her, neither voicing their worry, even as it filled their faces.

Francis opened the door and the crisp dampness of the on-coming night cooled her hot cheeks.  His eyes touched hers only for a moment, and they were much too guarded for her to question his decision to leave.

“Good to see you all,” his voice cracked as he gripped the door.

Elizabeth stepped forward, her hand reaching out for him, but Francis swept across the threshold and pounded across the shadow-filled porch.

No one moved to stop him and moments later Christine heard the carriage careen down the lane. She eased the door shut, unable to answer the question in her mother’s gaze.  Her mama turned to the kids and urged them to the benches at the table and to the remains of a peach cobbler, her smile warm and reassuring.  Will’s three daughters stepped toward the table too and Christine smiled to each, struggling to recall their names.

The room was too quiet to be her family.  Her father and brother settled in rockers by the hearth and Tess fussed over Jimmy and Crystal, commenting on how much they’d grown.

Her parents home had always made her feel secure and Christine tried to smile, venture into conversation.  She fooled no one.  Apprehension made her voice shake.  Nothing was secure now, and she wondered if she should have tried once more to stop her husband. 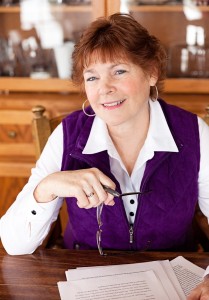 DL Larson always thought she’d be a city girl, but instead, she has spent the last 40 years surrounded by corn fields.  She lives in northern Illinois and enjoys the outdoors, especially gardening, boating and bike riding with her family.

Reading is a big part of DL’s life, both professionally as a writer and as a Children’s Librarian.

She likes being in the know, seeing firsthand what folks like to read.  Going back to school as an adult rejuvenated her desire to become a novelist.  The writing awards she received lifted her up and reinforced her drive to tell the best story she could.  Her second novel, Promises To Keep was a 2008 Reader’s Choice Recipient.

DL is a WindyCity member of RWA. She blogs each Thursday at http://acmeauthorslink.blogspot.com/