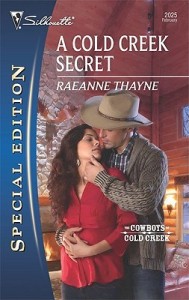 A Cold Creek Secret by Raeanne Thayne
Publisher: Harlequin Special Edition
Release: 2012
Source: This book was sent to me for free from Harlequin

Blurb: The Soldier and The Society Princess
Just back from a tour of duty, all Major Brant Western wanted was a hot meal and a warm bed. What he didn’t need was the stunning socialite in disguise who’d just shown up at his family’s Cold Creek ranch. Scandal tailed bad girl Mimi Van Hoyt – ada Maura – everywhere she went. But once Brant discovered her secret, how could he turn her away?

Being stranded in the middle of nowhere in a blizzard was not Mimi’s idea of a fun time in the Tetons. Then why was she starting to think this sexy soldier could be more than her shelter from the storm? And the more determined Brant was to protect her and her unborn child, the more she believed that this honorable, irresistible military man was the only man for her.

This little book showed up in my mailbox as a free gift a few weeks ago. I actually received several copies and will be giving them away to random commenters.

I liked this little book. The story is about Major Brant Western who is home on leave from a tour abroad where he lost some of his team-mates. He’s struggling to come to terms with his loss and his feeling of guilt and blame. Working his ranch in eastern Idaho brings some peace to his soul. Along comes Mimi Van Hoyt in a rental car, completely incapable of driving in the building blizzard and drives right into his creek. After he fishes her and her little fluffball of a dog out of the wrecked car stuck in the middle of the creek, he recognizes who has landed on his property, regardless of her insistence that she is Maura. At first Brant allows Mimi her little lie, figuring it will be a tale to tell the guys when he gets back overseas. As time progresses, he realizes that there is more to Mimi that the papers would have him believe. Nothing like a blizzard to kindle a fire between two people!

This was a great story! I loved how the flighty Miss Mimi Van Hoyt found her inner strength. It was amazing to watch. It was also great to read about the gentling of Brant and his ability to start to find peace in the presence of someone who is supposedly so flighty!

This is a great read for a wet or snowy afternoon.

(13931)
$79.99 (as of February 2, 2023 10:13 GMT -08:00 - More infoProduct prices and availability are accurate as of the date/time indicated and are subject to change. Any price and availability information displayed on [relevant Amazon Site(s), as applicable] at the time of purchase will apply to the purchase of this product.)