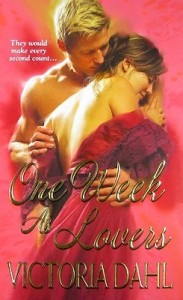 One Week as Lovers by Victoria Dahl

Some Pleasures, once tasted…

Even after finding his betrothed in the arms of another man, Nicholas, the Viscount Lancaster, knows he must wed.  Propriety – and the dire state of his finacnes – decrees it.  At least a visit to his country estate provides relief from playing the role of loving fiance, as well as a surprising encounter with Cynthia Merrithorpe.  Once his childhood companion, Cynthia has grown into a lovely, alluring woman – one who’s undertaken a daring ruse to avoid being sold into a miserable marriage.

Are Too Delicious to Forget…

When Nicholas left for London to assume his new title, Cynthia was forced to put aside her girlish infatualtion.  Now he’s returned, more wickedly attractive than ever.  And this time, Cynthia is determined to experience the pleasure she’s dreamed of for so long.  But with a man like Nicholas, seduction is only the beginning of a sensual journey that will tempt them both to defy convention, and uncover the very heart of desire…

Nicholas, the newly minted Viscount Lancaster is desperate to wed someone with money.  The bill collectors are barely being held at bay by the news that he is engaged to Imogene Brandiss, the daughter of  a wealthy cit.  Although he had resigned himself to a pleasant, probably loveless marriage for the sake of his title, his opinion changes when he walks in on his fiance with her lover.  The truth comes out as she bellows obsenities at him and his future life with Imogene is looking to be not at all pleasant!  To temporarily escape his situation, he uses the death of a childhood friend as an excuse to spend several weeks at one of his estates.  When he arrives and attempts to pay his respects to Cynthia’s step father, he discovers that Cynthia committed suicide on the news that she was going to be forced to marry the sadistic Lord Richmond.

It doesn’t take Nicholas long to determine that Cynthia faked her death and is trying to find a hidden treasure to fund her escape to America.  Nick is relieved to find her alive and offers to help her find the treasure, of course hoping that there will be enough money to help them both.  There is obviously more to Nick that is seen on the surface.  He has a history with Lord Richmond that we gradually learn about.

This is a delightful historical romance.  I am new to books by Victoria Dahl and was unaware that she had written about Nicholas previously.  This lack of information didn’t detract from my reading or understanding this story.  One Week as Lovers is well paced and the characters are well fleshed out.  At no point is the reader left feeling that they don’t have enough history to understand the story.  The characters of Victoria and Nicholas are well developed and their personalities compliment each other.  The secondary characters are well written.  Mrs. Pell is a delightful, motherly character that is well grounded and fosters the romance between Nicholas and Cynthia.  The evil Lord Richmond and his servant/son are suitably evil!  There’s just something about them that makes my skin crawl!  The author gradually draws the reader through a portion of the lives of the characters giving history as needed and gradually giving us the needed information on the problems in Nicholas’s past.

Overall, a delightful read.  A good introduction to this author and has me searching for more by this author.

One Week as Lovers is available on Amazon

All-new Kindle (2022 release) – The lightest and most compact Kindle, now with a 6” 300 ppi high-resolution display, and 2x the storage - Black

(1706)
$74.99 (as of February 5, 2023 10:29 GMT -08:00 - More infoProduct prices and availability are accurate as of the date/time indicated and are subject to change. Any price and availability information displayed on [relevant Amazon Site(s), as applicable] at the time of purchase will apply to the purchase of this product.)

Previous Post: « Along Came a Duke by Elizabeth Boyle
Next Post: Release Blitz for Yank by Selena Kitt »