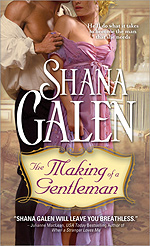 The Making of a Gentleman by Shana Galen

Blurb: Twelve years in a French prison have left the once dashing Armand Harcourt, Comte de Valère a hollow shell of his former self. Though safely back on English soil, Armand remains locked in a prison of his mind, unable to interact with the glittering social world that was his rightful place. When his family hires the beautiful and determined Felicity Bennett to teach Armand, he is shaken by the onslaught of desire Felicity awakens in him. As Felicity slowly helps reclaim Armand, their passion begins to blossom into a transcendent love capable of healing the scars of both their pasts.

This is the second book in the Sons of the Revolution series that Shana Galen created.  Although I started this series with the third book, The Rogue Pirate’s Bride, I quickly went in search of books one and two. The basic story line is about three brothers (and their mother) who were members of the French aristocracy. Although they (especially the parents) were aware of the unrest, they assumed they would be reasonably safe at their country home, until the night the peasants came with weapons and torches. Each book tells the story of one of the brothers. I’ve already read and review the Rogue Pirate’s Bride, the story of Bastien, who escaped with a family retainer and found himself at sea.  The Making of a Duchess is Julien’s story.  He escaped with his mother to England. His mother was English and they sought refuge with her family. The Making of a Gentleman is Armand’s story.  He was eventually captured and put in prison for many years.  It is his story that we’ll be talking about today.

This book is one of the most hauntingly beautiful, and uplifting books that I have read in a long time. As soon as I figured out that Armand had been in prison for years, I didn’t want to read what I assumed would be a disturbing book.  Really, how can a man who apparently watched his father meet his fate with Mme. Guillotine and spend years and years in prison, be a happily ever after story. I wanted, however, to complete the series.  I needed to hear how the story comes to a close. I am so glad that I did!

We read about Armand being rescued from prison at the end of The Making of a Duchess, and we know that he won’t or can’t talk. This book is aptly named, The Making of a Gentleman. Julien and his mother (and his wife) needed to take Armand and bring him out of his self-imposed shell. Teach him to talk, how to dress, and the rules of polite society.  They hire a governess, Miss Felicity Bennett, who has issues of her own, to tutor Armand.  Felicity needs a job, because she is being extorted in a way.  She takes the governess job, anticipating working with a child.  She’s taken aback when she realizes that she’ll be the governess to a stunningly handsome adult male. But she needs the money, so she stays. And Armand beings the process of learning about The Rules, the bane of his existence. The Rules say that he can’t touch his governess, even though he really wants to. The Rules say that he has to be fully clothed, including the hated shoes.  The Rules say that he has to use silverware when eating at a table and that he has to sleep in a bed, not on the floor.

I don’t have enough words to describe how moving this book is. It will certainly remain one of my all time favorite stories. I strongly suggest that historical romance fans read this whole series, from beginning to end.  It has a little bit of everything – even a pirate and a sword brandishing heroine!

I’ll leave you with a scene from The Making of a Gentleman where Armand is trying to discuss love with his brother Julien.  Enjoy!

Armand threw his hands out. “How the hell do I know? What’s love?”

Armand walked away from the window and leaned his hands on Julien’s desk. Julien looked decidedly uncomfortable now. He reached up and loosened his neck cloth. Armand wondered why he wore one when it was obviously so uncomfortable. Maybe The Rules said he had to wear it when he went out, but he was home. “The answer?” Armand demanded.

Julien ran a hand through his hair. “I don’t know. This is the sort of thing women talk about.  I guess…love is a feeling.”

“I have feelings for Miss Bennett.”

Julien raised a brow. “More than just wanting to see her naked?”

“Of course. She…” He hesitated. How could he explain how it was when he’d first seen her, first touched her, realized she could touch him without causing him pain? How could he explain how she had made him want to live again, to crawl out of his safe hole and risk all for her? And how could he put into works the fear and desperation he’d felt when he thought he might have lost her at Le Grenier? Nothing had ever terrified him so much. Nothing ever would.

Julien was smirking at him, at his lack of words. “That’s the problem. And, by the way, your solution.”

Armand frowned at him now, watched as Julien rose and poured another glass of the amber liquid. “You don’t make sense.”

“Love doesn’t make sense.” He swallowed half of the liquid, and Armand clenched his fist again. He felt like throttling his brother.

“It can’t be this complicated. I want Felicity to be happy.”

“Tell her that you love her.”

“You have to go into detail. You have to say when you realized you loved her, and how, and why, and how you’ll always love her.”

This book is available on Amazon

(535022)
$24.99 (as of February 5, 2023 10:29 GMT -08:00 - More infoProduct prices and availability are accurate as of the date/time indicated and are subject to change. Any price and availability information displayed on [relevant Amazon Site(s), as applicable] at the time of purchase will apply to the purchase of this product.)