Welcome also to Steamy Saturday. This is the day that I get to post a review for a book that is on the steamier side of romance. Today’s choice is a book that I reviewed a while ago, but never posted 🙁  I hope that you enjoy this! 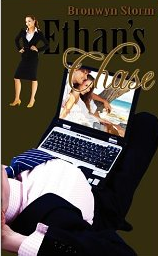 Blurb: Still wounded from a disastrous love affair, advertising executive Ethan Phillips has spent the past five years outwitting Cupid with a series of dekes and fakes. Who knew the tricky cherub would get wise? Rather than piercing Ethan’s heart with an arrow, he douses it with amaretto-flavored milk. A quick visit to the drycleaner and a stern lecture on the dangers of gorgeous, charming women, and he figures he’s made another clean getaway. But when the sexy woman turns out to be Chase Logan, his new systems programmer, Ethan’s got no where to run. Her charm, humor and intelligence soon have his heart racing and his libido revving. Suddenly, the man who spent his time running from Cupid, is now looking to borrow a few arrows. Ethan’s ready to give chase and pursue love. Will he catch the heart of his programmer or just be left catching his breath?

Take a “trifecta of gorgeous men”, a lovely leading lady and some hair-raising suspense and you have a great romantic suspense set in the big city.  Bronwyn Storm excels in writing outstanding characters.  Characters that draw you into the plot and don’t let you go until their tale is done.  Get a nice warm drink, a comfy chair and settle yourself in for a great book that you can’t put down until it’s done.

Ethan Phillips is a man who has been burnt in the past.  He’s a man who is a bit skittish when it comes to relationships.  Justifiably so considering his last girlfriend committed fraud against him and almost bankrupted his company!  When he literally bumps into Chase Logan outside a coffee shop he is immediately attracted to her – despite the smell of amaretto that reminds him of his last girlfriend.  He doesn’t give into temptation and sends her on her way, despite her invitation to get to know her better.

Even Ethan’s friends and co-workers identify his distration when he finally meets them for dinner, but don’t find out how much Chase will come to mean to Ethan until several days later when she shows up for bid meeting at their company to do some computer upgrade work.  Luckily, Chase knows in advance who is the president of the company she is bidding to work for.  Ethan, on the other hand is taken by surprise and their first official meeting doesn’t go well.
Ethan’s friends are on hand to see his reaction to Chase and help him identify the fact that he really does want to spend some time with her.  How they go about this is pretty fun reading!

The characters of Austin, Ethan and Jesse are childhood friends that have gone into the advertising business together.  Ethan is President,  Austin is Vice-President and Jesse is the Systems Manager.  As they are described “the trifecta of gorgeous men”.  Their personalities mesh well, and they have enough history to be able to read each other well.  I love how these characters bounce off one another.  The author has written their interactions in such as way as to bring them to life.  Ethan has a secretary, Gladys,  that runs the office like a military general.  He refers to her as a “General in Pantyhose” and feels that she could capably run the company without him most of the time; that he is just around for decoration.  Gladys is great, she has a spine of steel and easily manipulates the men in her life to do what she wants them to do.  Every good story has to have the evil characters.  In this story, Diana, the wannabe new VP and Tony, the stalker, are the nasty characters.  Diana is an over-the-top, advance in the company by any means type of girl.  If she can’t sleep her way to the top, she’s find some other quick route.  The author has fun with this character, I think.  She is the stereotype of every nasty piece of work  climbing the corporate ladder in Corporate America.  Although I was cringing at times, she made me laugh at her selfishness and short-sightedness.  Tony is Chase’s main competition.  He’s been cutting corners and trying to get ahead by any means possible – including driving Chase out of business.  He also is an awesome character that the author probably had fun creating!  At one point he is described as an over muscled, steroid using, muscle head.  In one scene Ethan tells Tony that he can attract his date’s attention by using the mountain of gold chains around his neck to catch the sun and signal her.   As much as I laughed at his character – he was dangerous.

This story combines many well, written characters that seem so real as they interact to tell the tale.  I enjoyed reading about the developing relationship between Chase and Ethan and how they handled the various conflicts they encountered.  The story is set in Toronto and the author had done her research.  The geography and the general feel of the story was correct for Toronto.

This book was a delightfully written Romantic Suspense!  I enjoyed it and will be searching out another book by this author.

Ethan’s Chase is available for sale on Amazon

(232927)
$24.49 (as of February 5, 2023 10:29 GMT -08:00 - More infoProduct prices and availability are accurate as of the date/time indicated and are subject to change. Any price and availability information displayed on [relevant Amazon Site(s), as applicable] at the time of purchase will apply to the purchase of this product.)