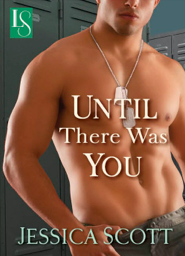 Blurb: A by-the-book captain with a West Point background, Captain Evan Loehr refuses to mix business with pleasure—except for an unguarded instance years ago when he succumbed to the deep sensuality of redheaded beauty Claire Montoya. From that moment on, though, Evan has been at odds with her, through two deployments to Iraq and back again. But when he is asked to train a team prepping for combat alongside Claire, battle-worn Evan is in for the fight of his life.

Strong, gutsy, and loyal, Captain Claire Montoya has worked hard to earn the rank on her chest. In Evan, Claire sees a rigid officer who puts the rules before everything else—including his people. When the mission forces them together, Claire soon discovers that there is more to Evan than meets the eye. He’s more than the rank on his chest; he’s a man with dark secrets and deep longings. For all their differences, Evan and Claire share two crucial passions: their country and each other.

You need to read this book because Claire Montoya kicks ass! And Evan is a man who can appreciate that.

Fort Hood, Texas
July 2005
Captain Evan Loehr was having a bad day. Granted, it could have been worse. Itcould always be worse. But as he pulled his Stetson out of its carrying case and dusted itoff, he contemplated the consequences for blowing off the mandatory fun of tonight’shail and farewell. He was not in the mood. Not in the least. Not when he was eight weeksout from leaving on his third deployment and was up to his neck in maintenance issuesand, well, other issues that he’d never in a million years thought he’d have to deal with asa company commander.
There were things he simply did not want to know about his soldiers.
But his battalion commander said they were going to the hail and farewell, so Evan was going to the hail and farewell. The brutal Texas summer sun blazed overhead,baking the earth and melting the asphalt beneath his shoes. He hoped like hell there wasair-conditioning in the bar.
More, he hoped none of his more illustrious soldiers decided to attend tonight’s shindig. He’d been in command for less than a month, and so far at least one of histroopers had spent a night in jail every single weekend.
Stepping into the bar, he walked into a blanket of darkness, tinged with cigarette smoke and a bouncy country song blaring at him from all sides. The dance floor wassurrounded by a low wall and illuminated with flickering strobe lights. He couldn’tbelieve they were having a military function at a bar where there would be civilians.Normally military functions like these were in separate rooms at somewhat classierestablishments, not in rowdy country bars. He wasn’t entirely sure it was a good idea, butthen again, he wasn’t in charge of planning the event. Evan made his way to the bar,needing something a hell of a lot stronger than a beer to get him through tonight.

(12153)
$49.99 (as of February 1, 2023 10:13 GMT -08:00 - More infoProduct prices and availability are accurate as of the date/time indicated and are subject to change. Any price and availability information displayed on [relevant Amazon Site(s), as applicable] at the time of purchase will apply to the purchase of this product.)