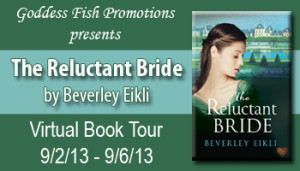 Today we are welcoming Beverley Eikli to the blog! She’s touring her book with Goddessfish Promotions and is here to share some information about her book, The Reluctant Bride. Beverley is giving away a $20 Amazon or B&N gift card to a lucky commenter. To increase your chances of winning, leave comments on more blogs. To find a list, click HERE. 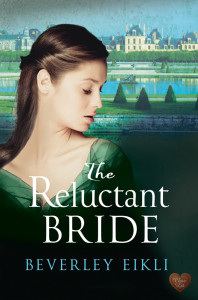 Emily Micklen is proud, passionate – and left with no option after the death of her loving fiancé, Jack, but to marry the scarred, taciturn, soldier who needs to secure a well-connected wife.

Major Angus McCartney hopes that marriage to the unobtainable beauty whose confident gaze about the ballroom once failed to register his presence will offer both of them a chance to put the past to rest.

Emily’s determination to be faithful to Jack’s memory is matched only by Angus’s desire to win her with honour and action. Sent to France on a mission of national security, Angus discovers how deeply Emily has been duped, but the secrets he uncovers lead them both into danger. Can Angus and Emily unmask the real conspirators before they lose everything?

In this scene Angus has just proposed to Emily his plan of inviting Emily’s father to visit.

‘If you think he’ll forgive me you know nothing of my father!’ She jerked forward in the bed. ‘Reconciliation is not possible!’

Instead of declaring roundly, as Jack might have done, that he’d make sure it all came to pass, Angus took a while to gather his thoughts. ‘You are respectably married,’ he said slowly. ‘The child will be born legitimate. You’ve brought no shame upon your family. Restoring ties between you and your father is important.’

‘No, you don’t understand.’ She was close to tears as she gripped his hands which were suddenly clasping hers. ‘Papa is vengeful. I sinned. If he could find another way to compound my suffering, my shame, he’d do it.’

Angus hunkered down to take her in his arms and as she was squeezed gently but firmly she felt a strange sensation in the pit of her stomach. Not the movement of the baby and something that was quite definitely more than just gratitude for his concern.

‘You belong to me now, not your father,’ he soothed.

With her ear pressed against his bare chest once again, Emily could hear the strong staccato beat of his heart. The strength of his arms around her was strangely comforting, for indeed the domineering spectre of Bartholomew Micklen did seem diluted.

Gently he lay her back down on the pillow and for a long moment she stared at him as if he were not the husband forced upon her whom she despised.

Still, it was important Angus understand. She clasped her hands and pleaded, ‘Don’t petition my father for forgiveness. It will only give him another focus for his dissatisfaction with me.’ She turned her head away.

‘Then I want to be the means by which you are reconciled. I can do that, Emily.’

She sucked in a quavering breath. ‘I don’t know why you’re so concerned that I mend ties with my father. It’s not as if I came with a dowry dependent upon his goodwill.’

Almost viciously she added, ‘And it’s not as if you married for love.’

In the lengthening silence she regretted her words, but it was too late. Miserably she stared at the wall.

Angus stroked her hands which plucked at the bedcovers. Then, leaning over her, he kissed her brow, his murmured words filling her with immediate warmth only to be swept away by fear of her own failings. ‘My dear Emily, I married where I thought I might find it.’ 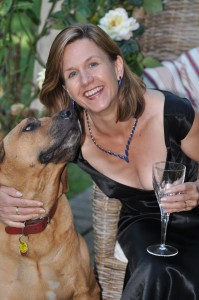 She’s been shortlisted twice for a Romance Readers of Australia Award in the Favourite Historical category — in 2011 for  A Little Deception, and in 2012 for her racy Regency Romp, Rake’s Honour, written under her Beverley Oakley pseudonym.

Beverley wrote her first romance when she was seventeen. However, drowning the heroine on the last page was, she discovered, not in the spirit of the genre so her romance-writing career ground to a halt and she became a journalist.

After throwing in her job on South Australia’s metropolitan daily The Advertiser to manage a luxury safari lodge in the Okavango Delta, in Botswana, Beverley discovered a new world of romance and adventure in a thatched cottage in the middle of a mopane forest with the handsome Norwegian bush pilot she met around a camp fire.

Eighteen years later, after exploring the world in the back of Cessna 404s and CASA 212s as an airborne geophysical survey operator during low-level sorties over the French Guyanese jungle and Greenland’s ice cap, Beverley is back in Australia teaching in the Department of Professional Writing & Editing at Victoria University, as well as teaching Short Courses for the Centre of Adult Education and Macedon Ranges Further Education.

Beverley won the Choc Lit Search for an Australian Star competition with The Reluctant Bride.

Finalist in the 2011 Australian Romance Readers Awards for her novel A Little Deception.

Beverley can be found:

The Reluctant Bride can be purchased: