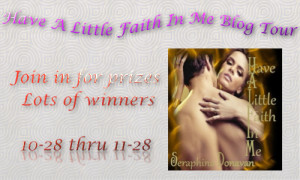 Today we are welcoming Seraphina Donavan to the blog! She’s here to share some information about her latest book, Have a Little Faith in Me. If this sound like the sort of book that you would enjoy reading, please find a buy link below. 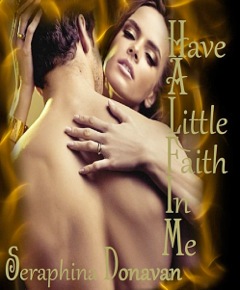 Blurb
Book Two of the DuChamps’ Dynasty Series.
Book One, Been Loving You Too Long is available at Amazon.

On the surface, Kaitlyn DuChamps is everything Grant Ashworth despises—a spoiled heiress with a bad attitude serving out her sentence on the farm as she tries to meet the terms of her uncle’s will. Brat or not, there’s no denying that she’s beautiful. Even as they snap at one another, he wants her, and it doesn’t take long for him to realize that there is far more to Kaitlyn than she wants the world to see.

Kaitlyn wears her bad attitude like the armor that it is. She forged it herself from the ugliness, from the pain and betrayal of her past. No one gets in, no one sees the real her, and no one gets past her carefully constructed defenses. Even as she gives in to the heat between them, to a passion with Grant unlike anything she has ever experienced, Kaitlyn tries to keep her emotional distance.

But Grant sees through her, digging at her secrets, chipping away at the walls…and when her past comes calling, she has to decide just how much she trusts him.

Have a Little Faith in Me is available from Amazon

*   *   *
About the Author
Seraphina Donavan is a hopeless romantic with a wicked & oh-so-dirty mind! Those things, combined with her love of writing, prompted her to take the leap and transform those fantasies into written words on a page. As a curvy girl herself, Seraphina has made it a point to celebrate those women with delicious curves with her work through writing and the hot men who love them.
She currently has 11 published books & is working on many more.
Living in Central Kentucky, Seraphina spends her time rescuing stray animals, working for a non-profit agency and dreaming of becoming a best-selling author. She lives in a home that has more character than working parts and enjoys spending time with her fur babies. Feel free to contact her with any questions or thoughts on your mind.. She loves connecting with her readers & hearing from anyone!
*   *   *

After the girl left, stomping off in a huff, Grant turned back to Kaitlyn. “I’m sorry about that. Allison has a little problem with authority.”
“She doesn’t seem to have a problem with your authority. I’d say that she’s more than eager to do anything that you ask of her.” The observation seemed pointedly vague, but there was a wealth of meaning in her tone.
“Just what the hell does that mean?”
Kaitlyn shrugged. “You tell me. A grown man wandering around with a sixteen-year-old girl who obviously worships the ground he walks on…That’s pretty heady stuff, I’d imagine. Needing your ego stroked, Grant? Are actual grown women just too much for you to handle?”
He moved toward her then, stalked more accurately, but Kaitlyn refused to back down. Even when they were toe to toe and his face was mere inches from hers, she stood firm.
“If you want to make accusations, Kaitlyn, make them. But be damned clear about it.”
The anger surprised her. The ferocity of the rage bubbling within her was something she hadn’t experienced in more years than she could even put a number to. “Fine. That girl and she is a girl, even if she does look like a grown woman, obviously worships you. If you think for one minute that you can get away with taking advantage of her—”
Kaitlyn didn’t finish the statement. Grant seized her upper arms and pressed her back against the wall of the barn. His grip felt firm, but not bruising. The look on his face, the banked fury burning in his green eyes, felt more frightening by far. “I know the difference between a grown woman and a little girl. Make no mistake about that Kaitlyn!”
It was all the warning she received. His mouth settled over hers in a hard kiss. It felt rough, punishing, but still electric. His tongue slid between her lips, invading, marauding, a blatant display of sheer arrogance and male domination.
Well, it didn’t stop her from kissing him back nor from tangling her tongue with his while she strained against him, eager to feel the heat and the hard press of his body.
All the anger, the bickering, and the constant jabbing at one another had just been fuel for the fire now burning between them. The heat of the kiss seared her to her soul. It burned through her like a wildfire and left her shaking with both desire and fear. She didn’t want to want him. Wanting anyone, this desperately could only lead to disaster. A road she knew well and it petrified her to feel so out of control.
It blew over quickly, a brief storm leaving them both shaken. The fury still there, but different somehow with a hint of what she could only consider to be pity in his eyes. “Who hurt you, Kaitlyn? What happened to make you have such ugly thoughts?”
The kiss might have rocked her back on her heels, but the question made her come out of the corner swinging. She pushed against him, flattening her hands against his chest, dropping everything clutched in her arms. It didn’t matter. All that mattered in this moment—get away from him, from the temptation and from the too knowing look in his eyes. Ignoring the pain in her hands, she pressed against his chest, pushing with all her might. He seemed immovable. “Get off me!”
He took her wrists, closing one hand over each, his touch gentle. “You’re going to hurt yourself!”
She twisted her hands in his grasp, desperate for an escape. “Then stop bullying me and let me go, dammit!” She might as well have been talking to a brick wall.
He turned her hands over, checking her blistered palms again.
“I’m not a child.”
“No. You’re not, but damned if you don’t act like one sometimes.” His sigh sounded heavy as he let her go. “What you accused me of Kaitlyn, that’s not the kind of man I am. I’d never hurt these kids.”
A hot retort burned on her lips, but she didn’t utter it. Somehow, she knew he was telling the truth. Seeing them together, she’d got a knee jerk reaction, sparked by her own ugly past. She’d let it seep too close to the surface and painted him with the same brush as another too handsome man she’d once known. The need for a reprieve felt even greater than her need to hold onto her already battered pride. “I just want to go, please.”
He stepped back then, crouching down to gather the things she’d dropped. “Would it really be so bad just to let it all out? To stop holding onto all those dark secrets?”
“Yes, it would.” Angrily, she snatched the items from his hands and moved away quickly, ignoring her desire to glance back at him just to see if he still watched her.