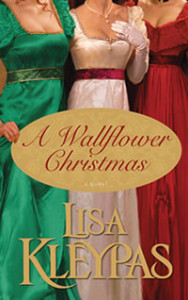 A Wallflower Christmas by Lisa Kleypas

Source: I received this book as a gift from my secret santa

Blurb: New York Times bestselling author Lisa Kleypas invites you to spend the holidays with the Wallflowers – four young London ladies who finally found the men of their dreams….and will join together once more to help the world’s most notorious rouge meet his match.

Rafe Bowman has just arrived form America for his arranged meeting with Natalie, the very proper and beautiful daughter of Lady and Lord Blandford.  His chiseled good looks and imposing physique are sure to impress the lady-in-waiting, and if it weren’t for his shocking American ways and wild reputation, her hand would already be guaranteed.  Before the courtship can begin, Rafe realizes he must learn the rules of London society.  But when four former Wallflowers try their hand at matchmaking, no one knows what will happen…

Winning a bride turns out to be more complicated than Rafe Bowman had anticipated, especially for a man accustomed to getting anything he wants.  However, Christmas works in the most unexpected ways, changing a cynic to a romantic…and inspiring passion in the most timid of hearts.

As I commented above, I received this book from my Secret Santa as part of the Book Blogger Gift swap.  I had been lusting after this book the entire time I had been doing Christmas shopping.  It seemed that everywhere I went, this book was staring at me from the shelves!  I loved the Wallflower series when I originally read them, and I was excited to find out how they were doing.  There is something about reading series of books.  Many of the series that I have read, the characters are written so vividly, they seem like real people.  You get attached to these characters and miss them when you are finished the book.

A Wallflower Christmas allowed me to catch up on how the Wallflowers are doing, and witness some more shenanigans that they get up to!  This time their matchmaking involved their brother.

Rafe has arrived from America to meet and marry the woman his father has chosen to be his future wife.  Natalie Blandford is a beautiful young woman, adept in manipulating men.  She has been pursued by several men, but is holding out for the best match.  That seems to be the incredibly wealthy Rafe Bowman.  Her poor cousin and companion, Hannah Appleton, is left in her shadows.  When Hannah is invited to tea so that she can be pumped for information about Natalie, she gets her first look at Rafe Bowman as well as the rest of the Wallflowers.  Brash Rafe, is decidedly American in her books – bordering on boorish and lacking in polite manners.  When he corners her and kisses her, she’s not certain what to think.

“ Slowly Bowman took his lips from hers and guided her head to his chest, which moved beneath her cheek with strong even breaths.  A mischievous whisper tickled her ear. ‘This is how we court girls in America.  We grab them and kiss them.  And if they don’t like it, we do it again, harder and longer, until they surrender.  It saves us hours of witty repartee.’ “

The problem is if Rafe doesn’t marry Natalie his father will cut him off.  Although he is wealthy in his own right, he wants to be part of the Bowman empire, expanding the manufacturing plants to new countries, new locations.  What to do?

Although I am admittedly a fan of Lisa Kleypas, I completely enjoyed this book on many levels.  It was wonderful to “catch up” with the Wallflowers.  I enjoyed their books when I read them, and this book brought back memories.  For those readers who haven’t read the Wallflower series yet, it isn’t necessary.  There is enough history skillfully woven into the book to help the uninitiated reader.  Rafe is a wonderful character, almost an over the top parody of an American male.  It’s interesting to see the public side of Rafe as well as the caring, sensitive, and morally upstanding private Rafe.  He’s brash enough to catch the attention of Hannah and sensitive enough to hold her regard.  Hannah is also a well written character!  She’s basically a well-treated servant to Natalie.  She does her job well and has a reasonably comfortable life.  She realizes the implications of falling in love with Rafe and fights it at every turn.

I liked this book.  It was well paced and well crafted.  Lisa Kleypas writes a sensual love story that has you glued to the pages.  I loved the final glimpse into the lives of the Bowman family and the Wallflowers.  Well worth the read!

A Wallflower Christmas can be purchased on Amazon

Wealthy entrepreneur Rafe Bowman has come to London to marry Lady Natalie, an aristocratic bride who will help to further his ambitions. But two things stand in his way : Lady Natalie’s disapproving companion Hannah . . . and Rafe’s passion for a woman he should not want and can never have . . .

They walked through the winter garden in silence, while Hannah struggled with the certainty that Rafe Bowman was even more dangerous, more wrong for Natalie, than she had originally believed. Natalie would eventually be hurt and disillusioned by a husband she could never trust.

“You are not suitable for Natalie,” she heard herself say wretchedly. “The more I learn about you, the more certain I am of that fact. I wish you would leave her alone. I wish you would find some other nobleman’s daughter to prey upon.”

Bowman stopped with her beside the hedge. “You arrogant little baggage,” he said quietly. “The prey was not of my choosing. I’m merely trying to make the best of my circumstances. And if Lady Natalie will have me, it’s not your place to object.”

“My affection for her gives me the right to say something”

“Maybe it’s not affection. Are you certain you’re not speaking out of jealousy?”

“Jealousy? Of Natalie? You’re mad to suggest such a thing”

“Oh, I don’t know,” he said with ruthless softness. “It’s possible you’re tired of standing in her shadow. Watching your cousin in all her finery, being admired and sought-after while you stay at the side of the room with the dowagers and wallflowers.”

Hannah sputtered in outrage, one of her fists clenching and raising as if to strike him.

Bowman caught her wrist easily, running a finger lightly over her whitened knuckles. His soft, mocking laugh scalded her ears. “Here,” he said, forcibly crooking her thumb and tucking it across her fingers. “Don’t ever try to hit someone with your thumb extended—you’ll break it that way.”

“Let go,” she cried, yanking hard at her imprisoned wrist.

“You wouldn’t be so angry if I hadn’t struck a nerve,” he taunted. “Poor Hannah, always standing in the corner, waiting for your turn. I’ll tell you something you’re moore than Natalie’s equal, blue blood or no. You were meant for something far better than this.”

“A wife for convenience and a mistress for pleasure. Isn’t that how the peerage does it?”

Hannah stiffened all over, gasping, as Bowman brought her against his large, powerful form. She stopped struggling, recognizing that such efforts were useless against his strength. Her face turned from him, and she jerked as she felt his warm mouth brush the curve of her ear.

“I should make you my mistress,” Bowman whispered. “Beautiful Hannah. If you were mine, I’d lay you on silk sheets and wrap you up in ropes of pearls, and feed you honey from a silver spoon. Of course, you wouldn’t be able to make all your high-minded judgments if you were a fallen woman . . . but you wouldn’t care. Because I would pleasure you, Hannah, every night, all night, until you forgot your own name. Until you were willing to do things that would shock you in the light of day. I would debauch you from your head down to your innocent little toes”

“Oh, I despise you,” she cried, twisting helplessly against him. She had begun to feel real fear, not only from his hard grip and taunting words, but also from the shocks of heat running through her.

After this, she would never be able to face him again. Which was probably what he intended. A pleading sound came from her throat as she felt a delicately inquiring kiss in the hollow beneath her ear.

“You want me,” he murmured. In a bewildering shift of mood he turned tender, letting his lips wander slowly along the side of her throat. “Admit it, Hannah, I appeal to your criminal tendencies. And you definitely bring out the worst in me.” He drew his mouth over her neck, seeming to savor the swift, unsteady surges of her breathing. “Kiss me,” he whispered. “Just once, and I’ll let you go.”

(461830)
$39.99 (as of June 22, 2022 12:00 GMT -07:00 - More infoProduct prices and availability are accurate as of the date/time indicated and are subject to change. Any price and availability information displayed on [relevant Amazon Site(s), as applicable] at the time of purchase will apply to the purchase of this product.)