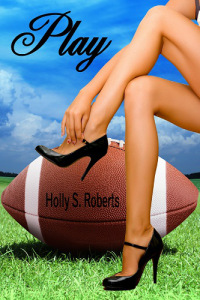 When Killian MacGregor, the hottest quarterback in the NFL, eyes the perfect pair of female legs, he spends an hour tracking the gorgeous woman in a room filled with rowdy teammates until one gets out of line.

Rebecca Cavanaugh, a long distance runner for the state team, intimidates boys and men with her quick wit and majestic height. The pre-season jock party isn’t her scene, but she’s roped into attending to provide her sister a sober ride home.
Hiding in the kitchen to avoid the athletic sex fest, a drunken thug forces Rebecca to her knees, and waves a giant ding-dong in her face. Before Rebecca can extricate herself from the hairy situation, an unknown champion saves the night. When Killian assists Rebecca off the floor, she’s stunned into silence while staring at the sexiest man alive.

“Play” is intended for mature readers 18+. Enjoy with caution… this book contains adult situations, sex, and more balls than a girl knows what to do with.

Why you need to read this book. This book is about the relationship between a NFL star and a college student. Rebecca stands up for herself and gets the Killian that she deserves not the one that is first offered. Loved this story!

Play is available on Amazon

“Ah, hell,” he muttered, turning my way. He unlatched my seat belt and pulled me in for the most mouthwatering kiss I’d ever had.

His hard lips molded to mine. His tongue ran over my teeth, tasted, dipped deeper and then plunged. His hands went to my ponytail, effortlessly sliding out the elastic before spreading his fingers to either side of my scalp. He sank farther into the kiss, making promises with his lips.

He tasted so fucking good.

When he pulled back, I actually whimpered. The sound he made was more like the rumbling growl of a lion. He took my lower lip between his teeth and pulled slightly before letting go. He put distance between us and I immediately missed his mouth.

“We’ll eat at my house.” He kissed my forehead, reached over, grabbed the seat belt, and fastened me in again. My hands went to my hair as I looked around for the hair tie.

I stopped my search, but couldn’t help running my fingers through the mussed tangles. Killian’s hand captured mine. “No.” He released my fingers just as fast as he verbalized the one word.

Okay, I wasn’t a pushover, didn’t have much experience with guys, but I had some. I should have argued, straightened my hair anyway, or even voiced some sort of displeasure. But an intense electrical pulse shot straight to the juncture of my thighs, charged my clit, and there I went and tried to stain his upholstery again.

I kept my mouth shut.

(1929)
$99.99 (as of February 1, 2023 10:13 GMT -08:00 - More infoProduct prices and availability are accurate as of the date/time indicated and are subject to change. Any price and availability information displayed on [relevant Amazon Site(s), as applicable] at the time of purchase will apply to the purchase of this product.)

Previous Post: « A Week to be Wicked by Tessa Dare
Next Post: Super Book Blast & Giveaway – Untangle My Heart by Maria K. Alexander »