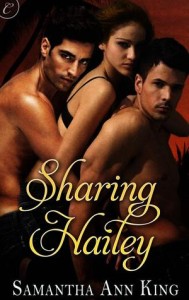 Hailey Anderson’s deep, dark secret? She’s been madly in lust with her overprotective brother’s two best friends for years. Gorgeous woodworking artist Mark Allen and sexy doctor Tony Adamo have no idea they star in her fantasies every night.

After a nasty breakup with her abusive boyfriend, Hailey’s looking for a little distance. Headed for a two-week Hawaiian vacation with her brother and his hot friends, Hailey can’t wait to feast her eyes on Mark’s and Tony’s rock-hard, ocean-slick bodies. Even if she can’t touch.

But instead of treating her like their little sister, Mark and Tony have a surprising proposition: a monogamous ménage à trois. The three of them—and no one else. Both men want Hailey and have agreed to share her. The red-hot reality is even better than the forbidden fantasy. Until Hailey’s ex threatens their newfound happiness…

Sharing Hailey is available on Amazon

Why do you need to read this book? This is a great menage romance where the emphasis is on the relationship. I love the interaction between Hailey and these two very different men!

Hailey stood in the line at Phoenix airport security flanked by her brother’s two best friends, aka serious drool material. As if she hadn’t been able to figure that out for herself, every woman in the vicinity and a few of the men reminded her. Even mothers busy with babies and toddlers managed to sneak in wistful glances at them.

Yes, she was vacationing with her brother and his wife and her brother’s best friends. How pathetic was that? Her boyfriend hadn’t wanted to go. And why was a thirty-two-year-old woman using the term “boyfriend,” as if she were still in high school?

Nix that. She no longer had a boyfriend. After a year and a half, she’d finally broken it off with him two days ago. Well, technically a day and a half ago.

Surreptitiously, she swept the area with her gaze just to make certain Daniel hadn’t followed her. No sign of him. Just a few families going on vacation and a lot of business people with their carry-ons in one hand and BlackBerries in the other. She pulled her cell phone from the back pocket of her jeans and checked for messages.

One from her brother saying he and Nikki had arrived in Hawaii and to “get her rear in gear.” She automatically deleted the message and then the phone number in the log of incoming calls, leaving it empty. She checked her outgoing log to make certain it was empty then stopped herself.

Daniel was history. No more arguments over who called her or whom she called. No more fights over whom she lunched with. No more defending her meetings with clients. No more put-downs or subtle threats.

She should have been relieved. She wasn’t. Daniel hadn’t taken the breakup well.

Once again she scanned the crowd, more carefully this time.

“You lookin’ for someone?” Mark asked, his voice so close to her ear that she startled and her heart skipped a beat.

Hailey slipped the phone back in her pocket as she shook her head. “No.”

He rested his arm across her shoulders, and Tony ruffled her hair.

“Hey, sunshine, you’re on vacation. What’s got you so jumpy?” Tony asked, his dark eyes serious.

Hailey tried to clear her throat so her voice didn’t sound so rough. It was too damned early in the morning to talk. “Nothing,” she lied, but her next statement was the truth. “I didn’t sleep well last night. I’m just tired.”

Tony looked over her head at Mark and shrugged his shoulders. He obviously didn’t believe her. His frown and the lines between his dark eyebrows told her as much. One of the drawbacks of knowing each other for so long.

(118542)
$139.99 (as of June 22, 2022 12:00 GMT -07:00 - More infoProduct prices and availability are accurate as of the date/time indicated and are subject to change. Any price and availability information displayed on [relevant Amazon Site(s), as applicable] at the time of purchase will apply to the purchase of this product.)

Previous Post: « Secrets of Seduction by Nicole Jordan
Next Post: The Duchess of Love by Sally MacKenzie »